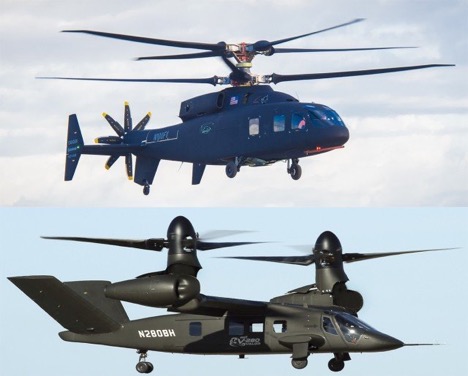 Depending on who wins the contract to replace the iconic UH-60 Black Hawk, the Army’s next workhorse helicopter may not be a helicopter at all.

Defiant definitely looks like a helicopter, with its two rotors on top spinning in opposite directions, but look a little closer at the back.

That’s not a conventional tail rotor for stability – with those counter-rotating main rotors, you don’t need one – but a pusher propeller, for speed. The combination, known as a compound helicopter, allows Defiant to reach velocities that are aerodynamically impossible for a conventional chopper. UH-60s max out around 185 mph (160 knots), but Defiant is designed to exceed 265 mph (230 knots).

And in the other corner, zooming over Bell’s flight test center in Arlington, Texas for McCarthy back in January, we have the Bell V-280 Valor, which is very definitely not a helicopter.

The V-280 is a tiltrotor, descended from the Marine Corps’ V-22 Osprey.

Tiltrotors have wings like airplanes and two enormous propellers that can tilt back to act like a helicopter’s rotors – hence the name – for vertical takeoff, landing, and hovering.

Both competitors acknowledge the tiltrotor design, with its airplane-like aerodynamics in forward flight, is even faster than the compound helicopter. Bell has exceeded 322 mph (280 knots) in test flights, a figure Sikorsky and Boeing acknowledge they won’t meet.  (The Defiant started flight test later and hasn’t gotten to its top speed yet).

What Defiant has going for it, its designers argue, is that it is a helicopter, albeit an unconventional one, with all the familiar features that Army pilots are used to. In particular, Sikorsky and Boeing say, a compound helicopter adds high speed while retaining a conventional helicopter’s agility at low speed – which is essential for dropping troops precisely in narrow landing zones, especially in cities, and rescuing the wounded.

Bell says their V-280 Valor proves every bit as agile as a chopper when it converts to helicopter mode. And while tiltrotors are unfamiliar to the regular Army, the Marines andAir Force Special Operations Command have years of combat experience with the V-22, which the Navy is now buying as well. The V-280 benefits from all that experience with the V-22, plus from having the same horsepowerTK on an aircraft half as heavy.

So how does the Army pick? This month, it will award two contracts for the next phase before final competition for a production contract: Competitive Demonstration & Risk Reduction. Those won’t be contracts to build prototype aircraft, the Army’s Future Vertical Lift director, Brig. Gen. Walter Rugen, told reporters here in Jupiter last week: “It’s not going to be full-up aircraft. It’s a demonstration of technologies that we want risk reduced [on],” he said. “It’s not the full and open competition for the program of record.”

So when will that happen?

“To be determined,” he said. But other Army statements strongly suggest 2023 or 2024, with the first operational aircraft entering combat units by 2030.

Technically, the Army could pick anycompanies for risk reduction or even the final production contract. As a practical matter, there are no other aircraft flying that provide the same combination of high speed, long range, and transport capacity than Valor or Defiant. (The only thing in the same speed class is Sikorsky’s own S-97 Raider, another compound helicopter, but it’s much smaller and has less payload).

Sikorsky and and Bell have spent decades developing the technologies in these aircraft. The Sikorsky S-69 compound helicopter (aka XH-59) first flew in 1973, while the Bell XV-3 tiltrotor flew in 1955. They have invested millions of their own money into developing the Defiant (along with Boeing) and the Valor under the Pentagon’s Joint Multi-Role program. Technically, JMR isn’t a competition, but a “technology demonstration,” and the V-280 and SB>1 aren’t prototypes, but “demonstrators.”

Whatever you call them, they’ve provided a tremendous amount of data to the Army. The Office of the Secretary of Defense did “independent tech readiness assessment,” Rugen said in Jupiter. “They went through all the technologies that go into Defiant, behind us and Valor, and they told us where our risk was,” he told reporters. “We understand that far left of [i.e. earlier than] where we would have in the past.”

There’s been over a decade of work on the Joint Multi-Role Tech Demonstration to get to this pointed, added Patrick Mason, the Army’s program executive officer for aviation. “If you look at these tech demonstrators and what’s been done, really, starting back in the ’09 timeframe when JMR TD started, we are able to really clarify what can be aggressive, yet achievable, requirements…  ensure the affordability of the new product…. and to burn down risk as we move into the program of record,” he said.

“We’re actually flying before we buy, and we’re getting after refining the requirements so we don’t build in unobtanium,” Rugen said. “We know this is something that’s achievable.”

With two strong competitors, Sec. McCarthy said, “it’s making this decision very difficult for us” — which is, of course, the kind of problem the Army wants to have.

This article was published by Breaking Defense on February 27, 2020.