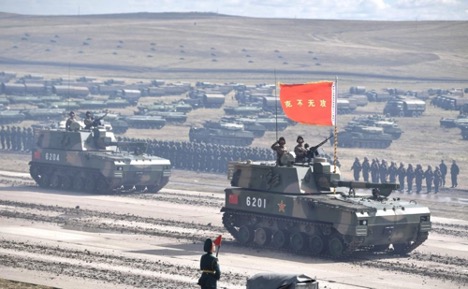 We are in an era when the risks of major-power conflict are growing. The most likely contenders are commonly seen to be China, the rising power, and the US, the formerly dominant power that’s now in relative decline. The other worrying contingency is conflict between Russia and US-led NATO.

But what about the third possibility: the prospect of China and Russia collaborating to challenge American power? Zbigniew Brzezinski warned that the most dangerous scenario for America would be a grand coalition of China and Russia united not by ideology, but by complementary grievances.

My new ASPI special report, released today, examines Russian and Chinese concepts of great-power war in the 21st century, their views of the West and its military capabilities, and the risks they might take to regain what they see as their lost territories in places such as Taiwan and Ukraine. It also looks at how America might react, the implications of all this for the West, including Australia, and what sort of armed conflict might be involved.

China and Russia are the two leading revisionist powers leagued together in their disdain for the West. Both these authoritarian states see a West that they believe is preoccupied with debilitating political challenges at home.

Russian President Vladimir Putin dismisses what he sees as a Europe that is weak and divided. Chinese President Xi Jinping believes that China is well on its way to becoming the predominant power in Asia, possessing an alternative and more successful political and economic model to that of the West.

China and Russia are now sharing an increasingly close relationship, especially militarily. If the China–Russia military partnership continues its upward trend, it will inevitably undermine the international security order by challenging the system of US-centred alliances in the Asia–Pacific and Europe.

This is not to argue that we’re going to see a formal Russo-Chinese alliance, but what we’re observing is an ever-closer strategic partnership. Russia and China are economically complementary; they’re both secure continental nuclear powers; and they’re both the dominant military powers in their own immediate regions. They believe that the West’s current disarray favours them geopolitically.

So, what are the chances of Beijing and Moscow concluding that now is the time to challenge the West and take advantage of what they both consider to be Western weaknesses? China and Russia are well aware of the military power of the US. But they both know that the US no longer enjoys uncontested military superiority everywhere.

Recognising this, it may be the time has come when Beijing and Moscow test America’s mettle and see if they can successfully challenge the US in both the European and Asian theatres.

Recently, their partnership has deepened to provide for increasingly advanced Russian military equipment sales to China, as well as joint military exercises in the Baltic and the East China Seas. In July this year, Chinese and Russian nuclear-capable bombers rendezvoused in East Asia and carried out provocative joint operations in air space claimed by South Korea and Japan.

Given Russia’s slow decline and China’s rapid rise, we might have expected that Moscow would support Western efforts to balance Beijing rather than undermine them. But the evidence now is accumulating to suggest that Russia’s relationship with China is strengthening and this carries distinctly negative geopolitical implications for the West. The distinguished American historian Walter Russell Mead has gone as far as describingcurrent Russian and Chinese military activities as ‘the latest manifestation of a deepening alliance between Russia and China’.

What risks might Beijing and Moscow take to recover what both consider to be historical territories belonging to the motherland? It’s important to understand that in China and Russia we have two long-established cultures that are different from the Western tradition. They have long memories of humiliation at the hands of the West. Both Russia and China have experienced historical circumstances when their societies have been weak and when the West has taken advantage of them.

Both China and Russia have effectively used incremental territorial claims recently to their strategic advantage. China’s creeping militarisation of the South China Sea is now an established fact. Russia’s use of military force in Crimea and Ukraine has been imposed without any military challenge from the West. There is every reason why they should both consider these as effective models to continue demonstrating their great-power status.

It now looks as though China and Russia are combining their forces to balance against the US, which they see as the common enemy. China is strong and decisive enough to serve as a strategic partner, while Russia seeks to reassert itself as an independent great power in Europe. Beijing is responding to its newly competitive confrontation with President Donald Trump’s America by deepening its strategic relationship with Moscow. China has no other strong major-power relationship either in Asia or Europe.

There can be little doubt that the build-up of their respective military forces suggests that they’re both increasingly preparing for conflict with the West. The rapid development of China’s military capability, together with serious reforms in Russia’s military forces, is occurring at a time when America cannot fight two major regional wars simultaneously. The US aims to maintain favourable regional balances of power in both the Indo-Pacific and Europe. But that will be a particularly challenging task, given China’s rising power in Asia and Russia’s flexing of its military muscles in Europe.

What are the implications of all this for the West? The fact is that the West is entering a period of great political distraction. America’s obsession with looking inward and ‘making America great again’ opens fresh geopolitical possibilities for China and Russia.

The implications for Australia relate not only to the dangers of armed conflict involving China and Russia against the West; some conflicts in the Asia–Pacific region might involve Australia more directly.

And there’s another important issue for Australia: Russia’s supply of advanced weapons to China threatens to undermine our long-held margin of technological advantage. The growing presence of both China and Russia in our region of primary strategic concern must be taken more seriously—especially if they begin to coordinate their activities.

Brzezinski’s warning that the most dangerous scenario facing US security would be a grand coalition of China and Russia is now fast becoming a geopolitical fact.

This article was first published on November 29, 2019 by ASPI.

For Dibb’s Report, see below: