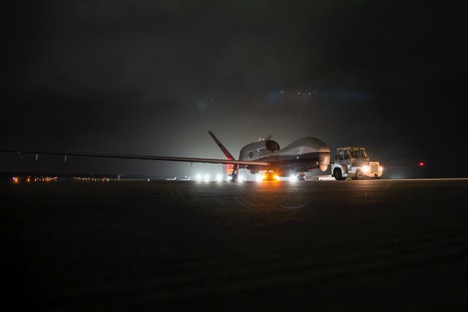 The order was announced by the Commonwealth on June 18, and may be confirmed by the US DoD in its daily contract announcements listing on June 19 (US time). Australia currently has a requirement for six Tritons, the first two of which were ordered in June 2018 and March 2019.

“Our membership of the Cooperative Program gives us the confidence to acquire our third Triton,” Defence Minister Senator Linda Reynolds said in a statement. “We will continue to work closely with the United States to assure our future capability. Together we are developing this cutting edge military technology to the highest standards. This work will help ensure Australia’s maritime region is secure well into the future.”

It is unclear if the third aircraft is being ordered as part of the RAAF’s original acquisition profile, or is from a planned US Navy buy which may be deferred for two years. As part of the US FY2021 President’s Budget plan – which is yet to be ratified – the Department of Navy has allocated no funding to Triton production Lots 6 and 7 in FY 2021 and FY 2022. In order to maintain production continuity and keep unit costs down, the US Navy and Northrop Grumman have been lobbying Australia to take those deferred slots.

“Triton will bring an incredible maritime surveillance capability to Australia’s whole-of-government security efforts,” Northrop Grumman Australia chief executive Chris Deeble said in a company statement. “Triton’s persistence and range will enable not only unprecedented maritime domain awareness, but also seamless surveillance integration with our US allies in the collective effort to preserve regional security and stability.”

The US Navy currently has two Tritons based on Guam as part of its planned early operational capability to support naval operations in the western Pacific. Australia’s Tritons will initially be based at RAAF Tindal in the Northern Territory due to that base’s proximity to its likely area of operations, but also because RAAF Tritons will not initially be equipped with a due-regard system to allow them to fly in controlled airspace.