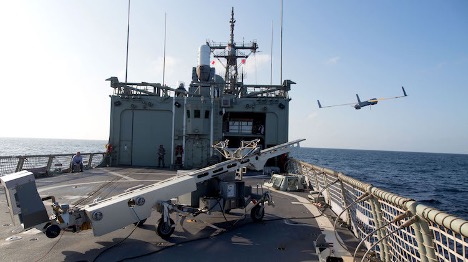 Block 1 will acquire a maritime UAS for the RAN’s ANZAC class frigates (FFH) and its new Arafura class offshore patrol vessels (OPV), and is scheduled to enter service in 2024. ADBR understands some of the same systems being offered for Army’s Project LAND 129 Phase 3 (page 16) tactical UAS (TUAS) will likely also be offered for Block 1.

The follow-on Block 2 requirement will equip the new Hunter class frigates, the first of which is expected to be launched in 2028. Whereas previously the SEA 129 Phase 6 requirement had reportedly favoured a larger air vehicle, the lack of a second hangar on any of the RAN’s current major surface combatants will likely preclude this.

The Block 2 air vehicle may or may not be common to Block 1, but ADBR understands the RAN is likely to favour a common system.

Block 3 is scheduled for the early 2030s, and will comprise a comprehensive technical refresh of the system to accommodate new payloads and other capability enhancements. It is envisaged SEA 129 will ultimately acquire about 36 systems, enough to be integrated with all of the RAN’s major surface combatants, and for an onshore training capability.

The Maritime UAS will utilise a common ground control segment (GCS) currently being developed for LAND 129 Phase 3, and ADBR understands it will be integrated into the vessels’ combat system rather than being a stand-alone system.

The RAN has been developing its UAS concepts of operation in recent years, with it’s Albatross-based 822X SQNconducting shore-based trials and limited maritime deployments of Insitu ScanEagle and Schiebel S-100 Camcopter systems under the non-capitalised Navy Minor Program (NMP)1942.

The featured photo shows as ScanEagle UAS launched from the flight deck of the former HMAS Newcastle. (ADF).