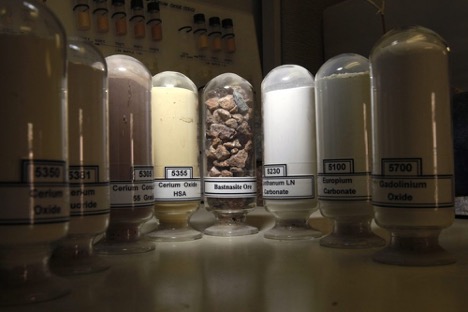 China has dominated the world’s supply of rare-earth elements for decades.

Over the past year, however, there has been a growing recognition among the US and its allies (including Australia, South Korea, Japan and India) that sources of critical minerals outside of China need to be secured and that solutions need to be driven by governments rather than market forces, particularly since demand for these materials will skyrocket in the near future.

Recent tensions in the Australia–China relationship have made the need to diversify rare-earths production even more pressing. China currently produces 90% of the world’s rare earths, so its dominance won’t be shifted overnight.

This underscores the urgency for Australia and its allies to minimise the risks of over-reliance.

One of the greatest challenges for rare-earths projects, particularly compared to other key Australian exports such as iron ore and coal, is getting upfront financing. Investment is spread thin among a plethora of small investors, creating barriers to market entry for substantial projects.

This creates risks that are prohibitive for single investors in the absence of government backing. The scale of the investment problem suggests that allied governments need to work together on providing financing for exploration, mining and processing if they are to develop adequate new supply chains.

There have been promising developments on the domestic front. Defence Minister Linda Reynolds signalled the possibility of increased government support to get rare-earths projects off the ground, considering the immense value they hold for defence applications.

Each of Australia’s F-35 fighter jets, for example, contains 417 kilograms of rare-earth elements; most technology applications require only a minute amount. China recently sanctioned Lockheed Martin, restricting its access to the rare-earths supplies needed to produce key parts. Actions like this accelerate the need to take an alliance-based approach.

Elsewhere in government, the Department of Industry, Science, Energy and Resources released a critical minerals strategy last year and established the Critical Minerals Facilitation Office. These are steps in the right direction, particularly if there’s close collaboration with the Department of Foreign Affairs and Trade as well as Austrade to tap into their wealth of knowledge on promoting trade opportunities and acting as a facilitator.

But in the face of the increasing supply-chain risk, there needs to be more decisive action.

A roadblock to greater allied cooperation right now is the political situation in the US. There have been rumblings among some Republican members of Congress that government funding and support should be given only to US companies.

For a commodity like rare earths, this is not a viable or appropriate path to take. China’s strength in rare earths comes from its grip on both upstream and downstream processes.

While one ally may not be able to assume all the risks of funding and establishing rare-earths projects, they can mitigate these risks by working together.

Rather than just focusing on securing supply locally, the US should move towards incorporating its local fabrication into a broader international strategy of close cooperation. When Japan’s supply of rare-earth minerals was cut off by China in 2010 as bilateral relations deteriorated, it pursued a strategy of international cooperation to deal with the crisis.

We are not at crisis point yet, but we shouldn’t allow it to get to that stage before pursuing a similar strategy and consolidating a joint allied approach.

Some of this cooperation is already happening.

Lynas, an Australian-owned company that runs one of the most significant rare-earths mining projects outside of China, has received support from international counterparts, including an initial investment of US$250 million from Japan in 2010. More recently, Lynas has partnered with US company Blue Line to build the first facility for processing heavy rare earths outside of China, located in Texas.

This is a sign that roadblocks in the US political system aren’t going to be as hard to overcome as originally thought.

Australian rare-earths miner Arafura Resources is piloting a project that will see its minerals processed in Colorado in a partnership with US company USA Rare Earths. Arafura is ready to supply significant amounts of key rare-earth elements, including neodymium and praseodymium, which are used in magnets and aircraft engines, but needs greater visibility and investment to do so. Other projects in Australia face similar hurdles.

These partnerships should be encouraged through advocacy by Australian government officials in strategic locations.

Australia’s ambassador to the US, Arthur Sinodinos, indicated that he has been advancing the Lynas case with the US Congress and the White House.

This support needs to be broadened and include a push against US-only policies on rare earths, which do not serve the wider agenda of minimising over-reliance on supplies from China.

For its part, the Australian government should look towards becoming an investor in this sector if it is serious about developing a rare-earths supply chain independent of China.

Looking even deeper into the future, investment should be made in exploring more sustainable ways of processing rare earths so the country that’s hosting processing facilities doesn’t bear the environmentally destructive impacts of processing.

Australia and close allies on this issue are at a critical juncture.

The aftermath of Covid-19 will have far-reaching impacts on the global economic situation but also offers the opportunity to remake vital supply chains.

Securing the rare-earths supply chain through investment featured prominently in the recent joint AUSMIN statement, signalling its importance to the US–Australia relationship.

But more robust advocacy is needed, and Australia should now take the lead in convening a high-level meeting with key allies to kickstart viable alternatives for rare-earths supplies.