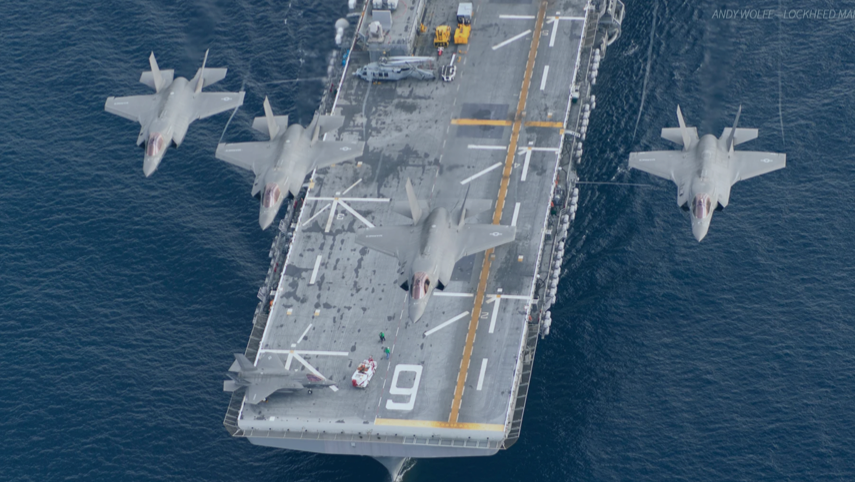 This summer, the South Koreans revealed that they were going to build a larger amphibious ship, and configure it to operate F-35Bs onboard.

At the time of the launch ceremony in May 2018, the South Korean defense minister noted: “In order to preserve our maritime sovereignty at sea and play a role as a member of the international community, we have to move farther toward greater oceans,” the minister said. “I’m convinced that the Marado will bring honor to the Republic of Korea by contributing northeast Asian and global maritime security.”

According to one source: “The Dokdo-class LPH can carry up to 720 fully equipped marines, 10 tanks, 10 trucks, seven amphibious assault vehicles and three artillery systems. It can sail at a maximum speed of 41 kilometers with a crew of 300 aboard.

“The well deck has a capacity for two landing craft. Below the deck hanger, 15 helicopters, including two V-22s, can fit while the flight deck can simultaneously accommodate up to five helicopters of all types, according to DAPA.” officials.

With this experience under their belt, they are moving on to build a larger ship, once which can operate fast jets. Rather than trying to cram F-35Bs onto a traditional amphibious ship, the South Koreans have decided to build more towards the USS America approach. They will build an aviation oriented ship without a well deck for launching amphibious vehicles.

But why are they building it?

How will it be used?

How does this platform decision presage changes in South Korean strategy?

And how will adding this capability for the South Korean force alter how they would need to think about ship defense and offenses involving a larger deck amphibious ship?

I will deal with these questions in later articles in this series but would first like to review answers to these questions which have been suggested in articles published after the decision became evident.

Let me review those answers.

According to Robert Farley writing in The Diplomat:

South Korea’s primarily military problem remains the existence and hostility of North Korea. But with both Japan and China building aircraft carriers, and with the United States no longer a reliable partner, the decision to pursue carriers has a clear strategic logic.

The prominence and novelty of the Japanese and Chinese carrier programs almost certainly mean that considerations of national prestige also play a role.

Still, one or two carriers would have their uses in a military confrontation with Pyongyang, offering South Korea a means of conducting mobile strikes from unpredictable vectors.

For Farley, the South Koreans are doing this because the United States is no longer a reliable partner. The Japanese and Chinese are building carriers, hence South Korea needs to do so. And finally, the amphibious ships with F-35Bs onboard allow mobile strikes from unpredictable vectors.

According to David Axe writing in Forbes, the new capability would provide more options in dealing with the core threat from North Korea

“The Inchon amphibious gambit worked in 1950. It could work again in the 2020s or later. For that reason the United States and South Korea maintain strong amphibious forces on and around the Korean Peninsula…

“Land-based fighters could contribute to the amphibious campaign, of course—as could U.S. Navy fighters from the U.S. Pacific Fleet’s supercarriers. But the amphibious group’s organic fighters, operating close to the beaches directly in support of the landing force, likely would provide the most effective air support.”

According to Joseph Trevitchik, the F-35B is a key addition in terms of providing force mobility to the South Korean forces/

“No matter what the ship’s final configuration might be, it stands to offer the South Korean Navy, and the country’s military as a whole, an important new capability in face of a variety of regional threats. Being able to launch F-35Bs from a ship at sea would be invaluable during any conflict with North Korea, when established bases on land would be subjected to heavy attacks. The B model Joint Strike Fighters could also use their vertical takeoff and landing capabilities to operate from fortified roads or simple concrete pads on shore, as well.”

For Kyle Mizokami, the new ship with its F-35Bs onboard are part of an effort to enhance war fighting capabilities against North Korea and are part of South Korean deference strategy.

“All of this makes South Korea a maritime country by nature. The threat from North Korea, however, has until recently forced it to invest much of its defense budget in its ground forces.

“An aircraft carrier will give South Korea the ability to fly combat missions against North Korea from directions other than over the demilitarized zone. Parked in the Sea of Japan or Yellow Sea, LPX-II will be able to fly F-35Bs into North Korea from the west or east, forcing the totalitarian state to remain vigilant to threats from not only the south, but also the west and east.

“Carrier-based aircraft would also be able to take advantage of blind spots in North Korean air defense system, egressing the country where its aging military infrastructure has created gaps in radar coverage.”

“Another likely factor is South Korea’s historical feud with Japan, which once held the Korean peninsula as a colony. In 2018, Japan signaled its intent to transform its two Izumo-class helicopter destroyers into ships capable of carrying fixed-wing aircraft, and announced plans to purchase 42 F-35Bs. Japan’s building of aircraft carriers, which it largely did as a response to China’s building of aircraft carriers, created pressure for South Korea to follow suit.”

To summarize: The South Koreans are building their large deck amphibious ships for prestiges reasons; They have built it to provide for new options to deal with the North Korean threat; they are building it because the United States is no longer a reliable partner.

Although the announcement of building a larger amphibious ship was news, the acquisition of F-35B is not so surprising. There is a growing set of nations in the Pacific who have grasped the point that the F-35B provides deployment options crucial in facing an enemy with enhanced strike capability against fixed targets.

But that point deserves further treatment as well.

And the question of how to shape a task force which would operate with such a ship is a significant one as well.

I will explore these questions in the next articles in the series.