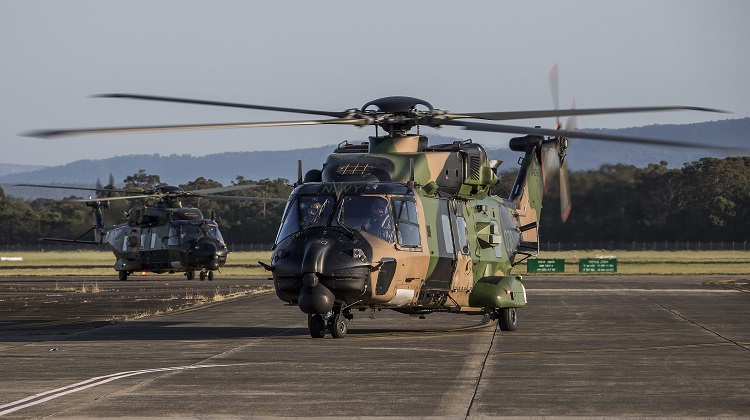 The ADF’s fleet of 47 NHI/Airbus MRH 90 Taipan helicopters has been grounded due to maintenance and safety issues with the aircraft’s support system. ADBR understands the fleet was grounded in May due to safety and certification concerns, and is unlikely to be returned to service anytime soon.

In response to questions from ADBR, a defence spokesman said in a June 16 statement that, “Defence has temporarily suspended flying operations of the MRH90 helicopter fleet. Defence and Airbus Australia Pacific are currently working collaboratively to remediate this issue.

“The fleet was suspended as a safety precaution,” the statement continues. “The issue relates to the application of the helicopter’s maintenance policy in the helicopter’s IT support system. Work continues to end this suspension as soon as possible.

“Army and Navy aviation will continue to support their exercise and operational commitments with Tiger, Chinook, Black Hawk and Sea Hawk helicopters.”

The grounding comes at what should be a very busy time for the MRH 90 fleet. The Townsville-based A and B Squadrons of 5 Aviation Regiment (5Avn) should have been working-up in Exercise Sea Explorer in preparation for the biennial multi-national Exercise Talisman Saber, while the Holsworthy-based special operations-focussed 6Avn is scheduled to retire its S-70A-9 Black Hawks and fully convert to the MRH 90 by the end of this year.

Despite efforts by the ADF and Airbus, MRH 90 availability has been an ongoing issue for the ADF since the helicopter entered service in 2007. 46 aircraft were acquired through Project AIR 9000 Phases 2, 4, and 6 to initially complement and then replace the Australian Army’s Black Hawks, and the Royal Australian Navy’s Sea Kings, respectively. A 47thaircraft was accepted as part of a commercial settlement between the Commonwealth and Airbus.

Many of the availability issues are reportedly attributable to European certification standards being different to those of the US from which the ADF sources most of its equipment, as well as difficulties in maintaining configuration management through the more than 40 different sub-variants of the baseline NH 90 helicopter which is built on six final assembly lines and is in service in Europe and the Middle East.

The MRH 90 has been grounded at least twice before, the last time in 2019 following a serious tail rotor vibration and delamination that required remediation of the tail rotors on all of the ADF’s fleet.

The Navy is currently looking to divest itself of its six MRH 90s in favour of a new type – possibly additional Sikorsky MH-60Rs – while Army recently took delivery of two leased Leonardo AW139s to augment 5Avn’s MRH 90 fleet at Townsville and to conduct non-combat tasks such as currency training and transport.

This article was written by Andrew McLaughlin and published by ADBR on June 16, 2021.