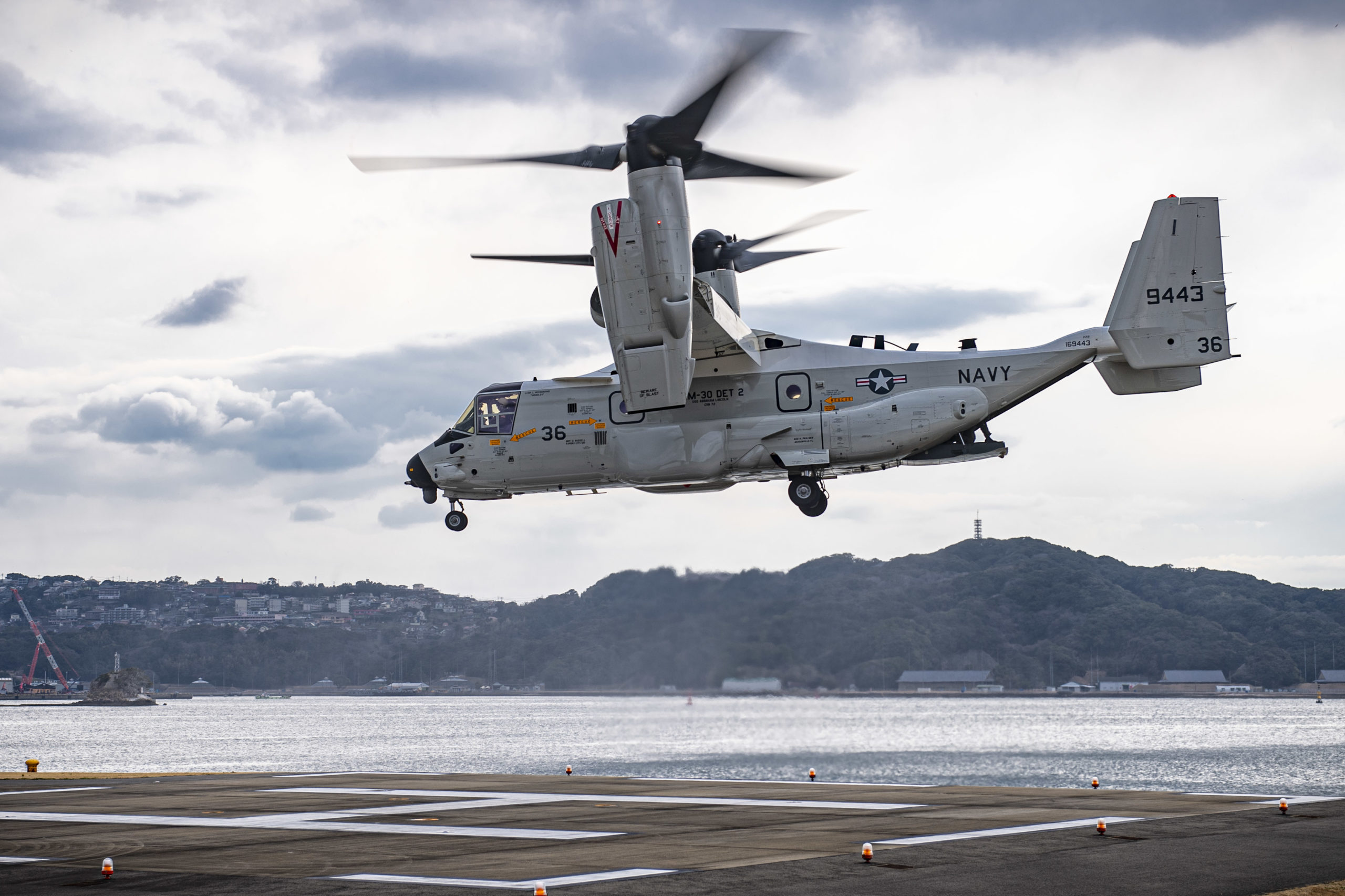 The United States latest National Defense Strategy continues to recognize the importance of the Indo-Pacific region to our global security posture. If deterrence turns out to be untenable and a sustained conflict occurs, the Joint Force will require the ability to supply its forces over vast maritime distances. This presents a significant Naval challenge as the current force structure does not match the strategic outlook.

The Navy must be able to move personnel, parts, munitions, medical supplies, foodstuffs, and the world’s most advanced fighters’ powerplant around the Pacific (quickly) during a sustained conflict, and they will need to reassess their intentions as demand for vertical lift aviation assets will quickly outpace the fleet capability. There will just not be enough to go around. This is an avoidable strategic procurement reality.

The Navy’s recently acquired CMV-22 Osprey tiltrotor delivers exactly the type of operational flexibility with the speed and range to move cargo and forces around the battlespace to support combat logistics for a distributed force in a contested environment across hundreds of miles. However, while the Navy and its Marine Corps brethren clearly recognize the unique capability provided by the V-22 platform, they have not matched their acquisition programs with the realization in multiple National Defense Strategies that maritime combat environments require versatile airborne solutions for logistics.

The Navy does not have enough CMV-22’s to sustain the Fleet and win the logistics fight in a contested environment, and this is something Navy leadership must take seriously and determine a solution for now. The currently planned V-22 procurements are ending at the same time the logistic demand signal during major combat operations will require an additional CMV-22B force structure.

If you consider what assets would be required in a Western Pacific conflict, the Navy will likely require a force consisting of five Carrier Strike Groups (CSG’s), nearly as many Amphibious Ready Groups (ARG’s), and several Surface Action Groups (SAG’s). This force would be supplied from several forward logistic support sites and expeditionary advance bases dispersed throughout the theater. When you consider the amount of personnel and cargo that would be required to support such an effort, it becomes clear that the Navy’s current CMV-22 Program of Record (POR), originally designed to fulfill the peacetime Carrier on Board (COD) logistics role of the C-2, will fall short. The Navy will require more CMV-22s to support sustainable combat logistics while conducting Distributed Maritime Operations (DMO) and Expeditionary Advanced Based Operations (EABO) throughout the Pacific.

The problem of resupply is not just a Navy problem – it is a “Naval” problem. Marine Corps Commandant General David Berger has spoken about the logistical challenges that need to be resolved. “We’ve got ground to make up” on logistics, Berger said. “Because if you’re going to fight as a dispersed force, you’ve got to sustain that force. And our supply lines have not been challenged in 70 years. We have not worried about what’s behind us. We need to focus on that now because they’re going to try to sever our lines.”[i]

There is still time for the Navy to realize the CMV-22 has value for a variety of mission areas that would make it a force multiplier in the Pacific, should we find ourselves in a conflict.

The speed, range, and aerial refueling capability of the CMV, coupled with its ability to concentrate and respond rapidly, offers versatility to Strike Group and Joint Force Commanders beyond its day-to-day logistics missions. The V-22 has already proven itself as a capable personnel recovery platform in Combat Search and Rescue (CSAR) missions around the world. This is an asset ready to quickly seize and maintain the initiative. The CMV-22 is far more efficient, safe, and versatile than any traditional rotary wing aircraft and provides a faster recovery which significantly increase survivability rates.

The integration of the CMV-22 into the Navy Tactical Grid could significantly increase the number of contacts and provide Strike Group Commanders another useful ASuW asset. With added networks and data links, the Osprey could expand awareness beyond a conventional helicopter’s capability, creating a more informed common operating picture and improving the Navy’s, and even Joint Force’s, tactical picture.

The CMV-22 improves economy of force by reducing ship and helicopter support requirements. Advanced Naval capabilities may not reach their full potential without a fast, long-range, tilt-rotor aircraft like the CMV-22B serving as a key component of the tactical grid. Robbin Laird once wrote “At the same time, technology changes can drive operational art, where a technology enables a solution that, when integrated, could change how you conduct your operations.” [ii]

The Osprey’s multi-mission flexibility and ability to be dynamically re-tasked from intra-theater aerial logistics to CASEVAC and long-range patient transfer will be unmatched. The ability to provide en route care of patients and rapid patient movement will save lives. This has already been demonstrated by the CMV-22 during its first two extended deployments. Casualty evacuations without the CMV-22 will take days vice hours to move injured from damaged ships to sea or shore-based hospitals.

While adding mission-sets has some possibilities and is worth exploring, the current core logistics mission requires additional CMV-22B aircraft to support sustained combat operations at a minimum. Helicopter assets diverted to CSAR, CASEVAC, MEDEVAC, ASW, NSW and ASuW missions will be unable to support combat cargo and personnel delivery missions and will further challenge an overburdened combat logistics system.

When a conflict comes, the Navy must have a survivable and sustainable combat logistics plan in the Pacific and the CMV-22 is key to successfully executing that plan. The Osprey is unique in that it can support and sustain the Fleet and Joint Force while simultaneously being able to augment their combat capability. The sooner Navy Aviation comes to grips that the CMV-22 community has far more potential value to the force than the two aircraft C-2 Det model it is replacing, the better.

Christopher “chet” Misner is a retired Navy Captain who flew the SH-60F, HH-60H, T-45, and commanded the “Red Lions” of HS-15, Naval Air Station Kingsville, UVa NROTC, and is employed as a Senior Manager at Bell. These are his personal opinions.