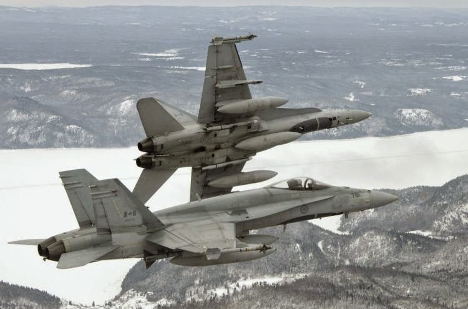 A US Defense Security Cooperation Agency (DSCA) notification has said the US State Department has approved the sale of a comprehensive package of advanced weapons and systems to Canada to upgrade some of its fleet of CF-18 Hornets.

The package is valued at US$862m (A$1.26bn), and includes 38 Raytheon AN/APG-79(V)4 active electronically scanned array (AESA) radars and 46 wideband radomes to accommodate the new radar. The (V)4 is a scaled down version of the Super Hornet’s radar adapted for the classic Hornet’s smaller fuselage cross-section and radome.

The package also includes new software to allow the integration of the new systems, and the installation of an Automated Ground Collision Avoidance System (Auto GCAS) like that integrated with USAF F-16s and F-35As.

Canada took delivery of its first CF-18s in 1982, and maintains some 80 CF-18s from a fleet that once totalled 138 jets. Despite acquiring 25 former RAAF F/A-18A/Bs to augment its fleet, only enough aircraft for two RCAF squadrons will be equipped with the new weapons and systems. It is not known if any of the former RAAF jets will be upgraded.

The DSCA notice says, “This sale will provide Canada a 2-squadron bridge of enhanced F/A-18A aircraft to continue meeting NORAD and NATO commitments while it gradually introduces new advanced aircraft via the Future Fighter Capability Program between 2025 and 2035.”