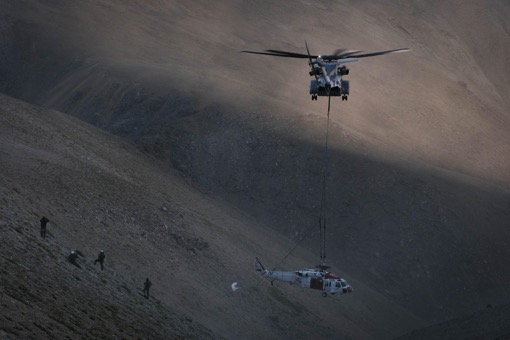 In this report,  I have brought together my pieces (with one exception) on the CH-53K published since mid-2020. The one exception? II start the report with a NAVAIR press release about the event highlighted on the cover page photo.

All of these articles show steady progress towards the CH-53K coming into the fleet.The dates entered after the headline for the article are from when those articles were published either on defense information or second line of defense.

This new aircraft is part of the next phase of the transformation of the USMC, one which integrates sea bases, expeditionary bases, and land bases into a seamless logistical whole.

And such a capability is clearly necessary for shaping the way ahead. In a recent meeting and interview with logisticians in the Pacific, we discussed the core challenge facing the logistical system of the USMC in the Pacific.

As way of introduction to the report, I am highlighting this interview which follows:

The distributed laydown which started in 2014 has now been re-calibrated to focus on Marines operating further forward in the Pacific and doing so with closer joint force integration while retaining the capabilities to contribute significantly to full spectrum crisis management with allies and partners. To do this with the force structure and budgetary limits facing the Marines will be challenging.

Underlying the strategic shift is the effort to find ways to shape sustainment capabilities. Obviously, the sustainment system used for the past 20 years in the land wars has little or no relevance to providing for sustainment for a both distributed force in a maritime environment, as well as one that may need to aggregate from multiple locations.

As one Marine put it during my visit to MARFORPAC: “We need to have the ability to close forces at the decisive point. We are operating as an expeditionary force, which means we have to agilely deploy and rapidly close.  We need to combine speed with expeditionary flexibility and reach.”

How do you shape a logistics system which can support such an approach?  I had a chance to discuss the logistics challenges and the evolving approach to meeting those challenges during my visit with Maj Katie Petronio, G-4 Engineer Planner and Mr. Jorge Diaz, G-4 Logistics Plans and Exercises. And as one participant put the challenge: “It is all about space. How do position ourselves to sustain the force where it needs to operate?”

Broadly speaking, the Marines have a number of ways to support their force projection force.

The first is to pre-position supplies throughout the region and working with allies and partners in exercises provides such an opportunity. Similar to how the Marines store supplies in Norway, there are opportunities in the region to build out pre-positioning options.

The second is to work integration among the sea-bases and to leverage not only what the amphibious fleet can deliver ashore, but also leverage the broader fleet. The coming of the CMV-22B to the fleet adds a common capability shared with the Marine Corps which allows cross-decking support and projection to mobile or expeditionary bases ashore.

Here the Marines own heavy lift capability, now provided by CH-53Es but soon by the new CH-53K, along with the enhanced capabilities of the H-1 family (newly enabled with Link 16 and full motion video capabilities) can play an important role in working sea to mobile or expeditionary basing dynamics.

The third is to rely on longer range lift provided by the KC-130J to move Marine Corps forces around the Pacific chessboard. The KC-130J fleet does face major demands for tanking missions which compete with lift missions and that constitutes a constraint on moving the force on the chessboard.

A fourth way to deal with the logistics challenges is to work joint force support more effectively. This primarily with the Navy but there is no reason this cannot be highlighted with the USAF as well, a subject I will address in a later article.  And over the past few years, the Marines have worked with the Military Sealift Command to build new ships which allow the Marines to deploy and be supplied by new ships that are not classic amphibious ships. A good example of this is the purpose-built expeditionary mobile base ships, like the Lewis B. Puller.

A fifth way, and one underscored in the current Commandant’s Force Design 2030 effort, is to reshape the force to reduce the logistical footprint required by Marines operating from expeditionary bases. This certainly can be done with the insertion of a C2 or ISR cell supportive of a broader joint force effort.

A key point was underscored by one participant on the importance of what was raised earlier in the conversation about sustaining a joint task force.

By opening the aperture of the Navy working with the Marine Corps differently, that is baselining integration, there was an opportunity to expand ways to support one other in joint combat situations.

“The focus here is not only the Navy supporting us but how do we support the Navy. The Navy needs to work with us to identify gaps which they have which we can solve. By coming together more effectively, we can co-learn as well reshape how we work together to support combat operations.”

But combining these various options into an overall logistics enterprise to support the strategic shift the Marines are undergoing will be very challenging indeed. Logistics enablement is clearly a weapon system in terms of ensuring that the Marines “can have the ability to close forces at the decisive point.”

The way ahead is to shape logistics network which is adaptive and can sustain a forward engaged distributed force.

And a major part of the challenge is to adapt service logistics systems to be able to provide for support for integrated force operations or to operate on a functional level.

How will a modular task force which includes Marines, Sailors or Airmen in an integrated operation be sustained?

The coming of the CH-53K is a key part of the answer.

The Coming of the CH-53K