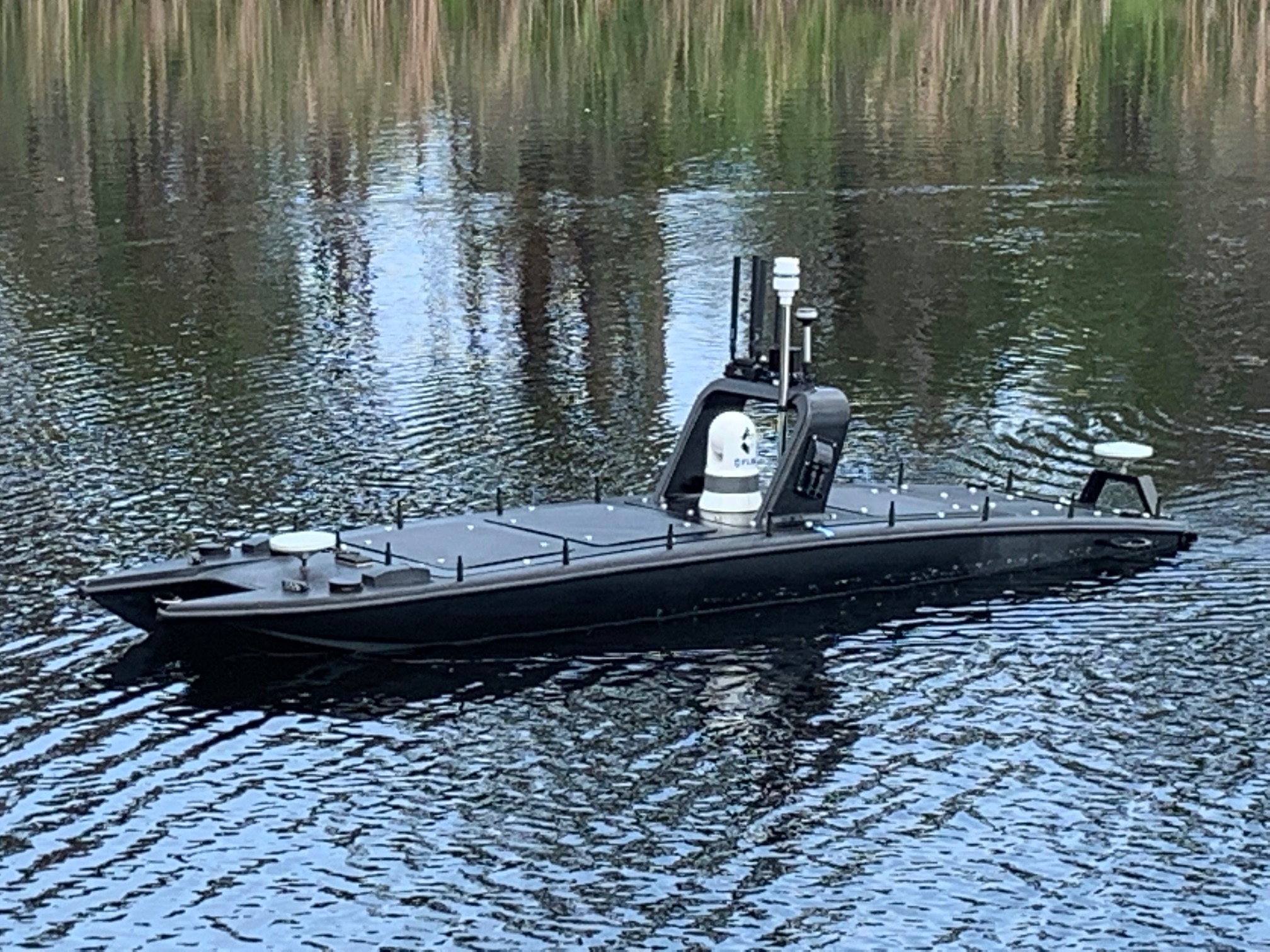 While logistics isn’t a topic that typically evokes deep passion, it should be.

Second Line of Defense has featured a number of articles focused on logistics and the supply chain.

The majority of these have focused on “big picture” logistics issues, for example, Robbin Laird’s, “The US Logistics Systems: The Challenge of a Strategic Reset.”

SLD has also featured articles about expeditionary operations, especially those conducted by the U.S. Navy-Marine Corps team, such as, “Presence, Economy of Force and Scalability: The New Amphibious Task Force.”

The Navy-Marine Corps team has been proactive in pushing the edge of the envelope in leveraging new technologies to make the nation’s expeditionary assault force more distributed, lethal, survivable and sustainable.

Many of these technologies have aided high-end and highly visible missions, but others have looked at missions conducted by the Navy-Marine Corps team that are typically “below the radar.”

Given the importance of logistics to the success of any amphibious assault, the sustainability function is one that is ripe for new technology insertion.

To be clear, the U.S. Navy and Marine Corps don’t have a monopoly on leveraging new technology to support the logistics function.

Readers of Second Line of Defense are likely well-versed in terms such as “dumb, dirty and dangerous work” referring to military operations that put warfighters at risk and that are well suited to have unmanned vehicles perform.

The U.S. Army – having suffered significant human loses in fuel convoys in the Middle East conflicts – is leading the way in this area, experimenting with unmanned fuel trucks to perform this vital logistics task.

Navy-Marine Corps exercises such as a series of Advanced Naval Technology Exercise (ANTX) events and the annualBold Alligator series have looked at a wide-range of emerging technologies that can make expeditionary assault forces more lethal, agile and survivable. Other events have examined different missions conducted by the Navy-Marine Corps team, specifically the logistics and sustainment function.

One doesn’t need to be a Clausewitz or Sun Tzu to understand the importance of logistics to warfare over many millennia. For the Navy-Marine Corps team, this plays out most prominently during an amphibious assault. The INDOPACOM Joint Exercise Valiant Shield exercise, overseen by Commander Marine Forces Pacific (MARFORPAC) and conducted on the Marianas Island Range Complex, experimented with using emerging technology to provide sustainment to Marines on the beachhead during this critical juncture of an amphibious assault.

Marines in the fight use enormous quantities of fuel, food, ammunition and other material as they attempt to move off the beachhead. If my three tours in command positions with the amphibious assault Navy taught me anything, it is that while many functions are important in an amphibious operation, once the assault is underway and Marines are on the beach, sustainment is crucial in ensuring their success. The mission will ultimately fail if the Marines are not able to have reliable and continuous sustainment.

Using manned naval craft for this sustainment mission puts operators at unnecessary risk of enemy fire, as well from near-shore obstacles that were not cleared prior to the assault phase. Using scarce manned craft to perform this mission also takes them away from more necessary roles. That is why this major Navy-Marine Corps amphibious exercise evaluated the ability of unmanned surface vehicles to conduct this sustainment mission.

Using unmanned vehicles for the sustainment mission can be a game-changer for expeditionary assault forces.  Beyond taking operators out of harm’s way, using USVs in this role frees manned craft for other missions. Additionally, having a continuous, preprogrammed, logistics resupply process to perform one of the dull, dirty and dangerous functions important in an amphibious assault means that there is one less thing for the commander to have to manage during these operations.

This proof-of-concept with a 12-foot MANTAS USV achieved positive results. That said, resupply in 120-pound increments is far less than is required to provide what is needed by the Marines on the beach. The Valiant Shield exercise provided the impetus and inspiration to continue to explore the use of USVs for amphibious force sustainment. Now, the Navy and Marine Corps are looking to “scale-up” small USVs and continue to experiment with using larger USVs to provide larger sustainment quantities.

To undertake this scaling-up effort, the maker of the MANTAS family of USVs (Maritime Tactical Systems, Inc.) was asked by the Navy and Marine Corps to  develop a larger proof-of-concept unmanned surface vehicle for this logistics sustainment mission using the same catamaran hull design as the smaller vessel used in Valiant Shield.

Plans for larger MANTAS unmanned surface vehicles ranging from 38-foot to 50-foot long are on the drawing board for further review by Navy and Marine Corps officials. While this may not be the ultimate size for the USV the expeditionary assault force needs as a long-term solution, it will go a long way to advancing the state of the art in unmanned semi-autonomous or autonomous logistics support.

While there are a range of larger USVs that can be evaluated by the Navy and Marine Corps, the basic specifications of the 38-foot MANTAS (T38) will provide an indication of the ability of USVs to provide a steady, continuous stream of logistics support to Marines on the beach. The T38 can carry a payload up to 4,500 pounds. The vessel travels at cruise speed of 25 knots and draws just 18 inches of draft. Additionally – and importantly for an amphibious assault – the T38 has a burst speed of 80 knots. Given the speed and carrying capacity of the T38-sized USV, it is readily apparent on how it can fulfill this, and other important logistics functions.

As any observer can see from a hilltop near one of several U.S. Marine Corps bases, an amphibious formation typically stands no more than 15-25 nautical miles off the beach being assaulted. Using a notional stand-off distance of 20 nautical miles, an amphibious formation equipped with four T38s traveling at their cruise speed of 25 knots could deliver 18,000 pounds of material from the amphibious ships to the beach per hour, allowing the short time needed for loading and unloading the craft. Multiply that by twenty-four hours and you get a buildup of well-over 400,000 pounds of vital material per day, enough to support a substantial force of troops ashore.

During the 2019 SNA Symposium, NAVSEA’s Program Manager for Unmanned Maritime Systems (PMS-406), Captain Peter Small, explained the attributes most desired in maritime unmanned systems: (1) endurance; (2) autonomy and precision navigation; (3) command, control and communications; (4) payloads and sensors; and (5) platform integration. As the Navy continues to explore new missions – to include this vital logistics sustainment function – for unmanned surface vehicles, these qualities will help the Navy choose the optimal USVs that will provide our warfighters with a decisive edge in combat.

The Navy is planning an ambitious array of exercises in the years ahead: several ANTXs, Sea Dragon, RIMPAC 2020, Bold Alligator, Valiant Shield, Valiant Blitz, Large Scale Exercise 2020, and others. Based on the promising performance of small unmanned surface vessels in support of expeditionaryassault forces, the Navy and Marine Corps would be well-served to experiment further with larger USVs to perform this vital logistics sustainment mission.

Over 2,500 years ago, Sun Tzu noted, “The line between disorder and order lies in logistics.” Those nations and navies with significant amphibious assault forces would be well served to leverage what the U.S. Navy and Marine Corps have already demonstrated in exercises such as Valiant Shield and explore the advantages of using unmanned surface vehicles to rapidly, reliably and continuously resupply troops ashore.

The photo is credited to Mr. Jack Rowley.