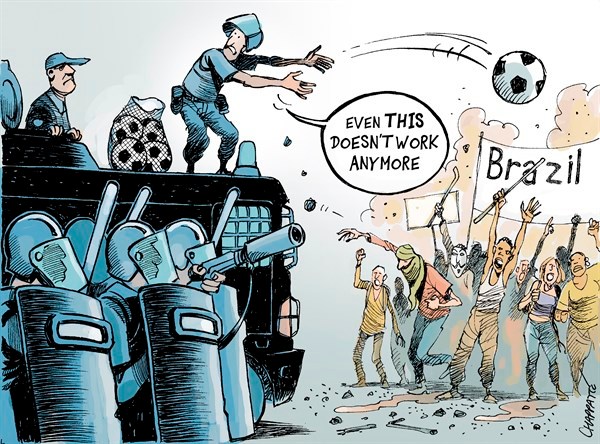 With the Presidential election in Brazil due this October the country remains profoundly split between uncompromising extremes.

Hovering in the background is the figure of the ex-president of Brazil, Luiz Inacio Lula da Silva, better known as Lula.

He is a former two-term president who is now in prison charged with corruption and money laundering.

But if he were, by some implausible miracle, to actually run for President again, some 30% of the population, according to the most recent public opinion polling by DataFolha, would still vote for him.

But Lula’s rejection rate is equally formidable, standing, according to the latest DataFolha poll, at 36%. While half the population love him.

Half the population hate him.

Lula undoubedly remains a hero to many, both within Brazil and internationally, even though he is a leader who presided over a massive corruption scandal, where the state petroleum company, Petrobras, became a piggy bank for an astounding array of national and international corruption scandals, involving many of Brazil’s major national and multinational construction companies, and which has permanently blighted the reputation of the Worker’s Party he founded (PT).

The dimensions of the Petrobras corruption scandals, and in particular those involving the Brazilian multinational construction company, Odebrecht,  have had large national and international consequences, not least in Mexico, where the tentacles of Brazilian corruption are still being covered up by the Mexican government where a presidential contest is also underway.

It is a fact that if Lula was to return to office, he would not be at all friendly to those who he claims targeted him for unjust punishment.

He would not be the “market friendly” to those who he believes have conspired against him.

The other great protagonist of the last 20 years in Brazilian politics, the Brazilian Social Democratic Party (PSDB) is also in tatters.

He is also a former presidential candidate for the PSDB having been defeated by Lula in 2006.

But he has only 7% support according to the latest opinion surveys while his rejection rate stands at 27%. (He also spent a year sabbatical as a visitor at Harvard.)

The octogenarian, Fernando Henrique Cardoso (FHC), the grand old man of Brazilian politics, and one of the founders of the PSDB, and a former two-term PSDB “Sociologist-President” (for such he was anointed when he was awarded the million dollar John W. Kluge Prize “recognizing an impact on public life” by the Library of Congess in 2015), meanwhile fulminates on the sidelines, seeking plausible (or rather inplausible) would-be presidential candidates.

He writes in the Washington Post that Brazil risks becoming a Venezuela.

But his PSDB is also mired in potential and actual corruption scandals, which has already severely damaged the reputation of Aecio Neves, the former Governor of Minas Gerais, and current senator from Minas Gerais, who was the PSDB’s candidate in its last unsuccessful  presidential campaign against the PT’s Dilma Roussef.

FHC spent a period as a visiting professor at Brown University after he left office, among many US academic visiting appointments he has held over the years.

But Michel Temer, the current MDB head of state, is the most unpopular President in Brazilian history, with only 2% of popular support.

He is dead fish drowning in very polluted water. But unlike Jesus, neither Lula, nor Alckmin, nor Michel Temer, has much hope of resurrection.

The candidate most closely associated with the deeply unpopular Temer regime, former BankBoston head, and Michel Temer’s former Minister of Finance, Henrique Meirelles, has only 1% of the intended votes.

But those seeking a new saviour think they have found a “Tropical Trump” “in the person of the far-right Rio de Janeiro congressman, former army parachutist and army reservist, Jair Bolsonaro, who without Lula as a candidate, is running ahead in the latest opinion polls.

Jair Bolsonaro has extreme opinions on all matters.

He is an outspoken admirer of the torturers of the military regime.

When he voted for the impeachment of Dilma Rousseff he eulogized one the the most notorious torturers of the military regime. Dilma was of course a victim of torture.

Bolonario needless to say is hostile to gays and same sex marriage.

He is also courting the evangelical vote, and he is rapidly becoming the putative darling of the “markets.”

He is in any case already the favourite of the richest Brazilians.

The other candidate with popular support is Marina Silva, an environmentalist, and the inheritor of the mantel of Chico Mendes, the assassinated leader of the Amazon rubber workers. She is a women with a personal biography to match that of Lula.

Of humble origins she comes from the Amazonian state of Acre. She only learnt to read and write in her late ‘teens. She is an evangelical Christian (which is the fastest growing group in Brazil even though Marina is not thought to be sufficiently “overt” in her evangelical faith by many evangelicals, unlike Bolsonaro.)

Marina served as environmental minister in the first Lula government until she fell out with Lula over Dilma Russeff’s policies when Dilma was Lula’s minister of mines and energy.

The other potential candidate with tranction is Ciro Gomes, affiliated with the Democratic Labour Party (PDT). Ciro Gomes has previously been associated with six political parties. He is another perennial political figure who has long campaigned at home and abroad. (He has spent time as a visiting reseacher at the Harvard Law School).

Ciro Gomes is from the northeastern state of Ceara. He was a former mayor of Fortaleza, a former governor of Ceara, former minister of finance under  President Itamar Franco.

Like Michel Temer, Itamar Franco, was a vice-president who inherited the presidency of Brazil after an impeachment.

Under Itamar Franco, he implemented the “Real Plan” which ended Brazil’s chronic inflation.

He served as minister of national integration under Lula.

He could well receive the tacit support of Lula in the upcoming presidential elections.

It is also expereiencing creeping militarization of public institutions (the minister of defence is now held by a general for the first time since the position was created).

And the national mobilization of truck drivers has demonstrated they can strike and bring the country to a standstill, and force the capitulation of a weak and unpopular government to their demands.

With a totally discredited and weakened president in Brasilia hanging onto office by default, the political class in Brasilia is seen by many Brazilians as ever more isolated and ineffective.

It is a very dangerous cauldron for democracy in a critical election year.