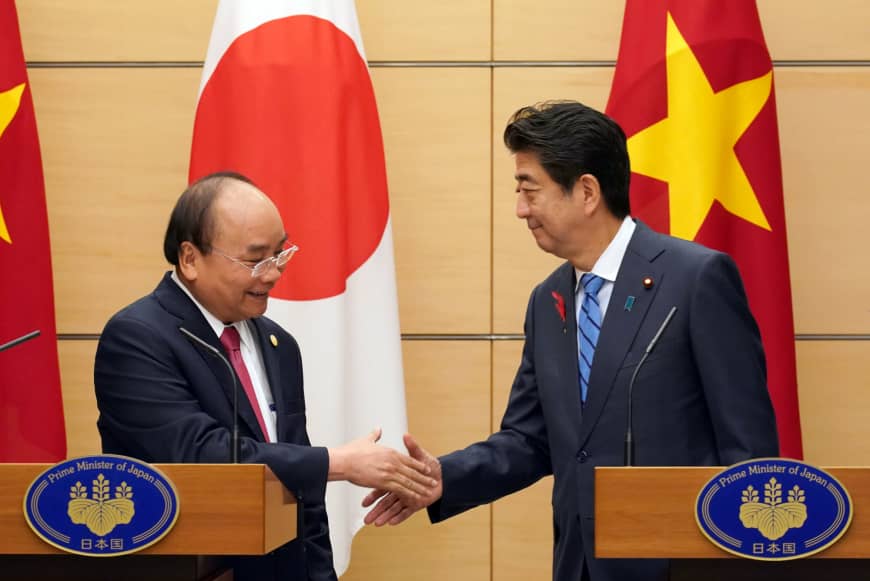 Prime Minister Abe is looking to bring the Japanese constitution in line with the strategic realities facing Japan with the rise of China.

The first change would be to draft language that would formally recognize the country’s Self-Defense Forces in the constitution, as Mr. Abe has proposed.

Currently, Article 9 states that “land, sea, and air forces, as well as other war potential, will never be maintained.”

Amending the constitution requires two-thirds support in both houses of Parliament, which would require a second change then as well, namely, a national referendum in which a bare majority would suffice.

According to an article by Byron Tau published August 12, 2018 in The Wall Street Journal, the plan faces significant challenges.

“There is still a very strong sentiment among the Japanese population who are against any form of military expansion,” said Hiroyuki Hosoda, who leads the ruling party’s amendment effort.

Nonetheless, he says, “the world has changed. Japan is an advanced nation. There is no merit whatsoever in starting a war.”

Japan has had a de facto military since the 1950s known as the Self-Defense Forces, and the constitutional changes sought by Mr. Abe would explicitly authorize those forces.

Backers say the change would send a message about Japan’s readiness to defend itself when the U.S. is re-evaluating its defense commitments and China is flexing its muscles with outposts in the South China Sea and a new aircraft carrier.

With regard to the Korean peninsula, he is looking for the United States to remain engaged with South Korea even if a peace agreement is reached.

Japan opposes any withdrawal of U.S. forces from the Korean Peninsula in exchange for North Korea’s denuclearization, Prime Minister Shinzo Abe said in an interview with the Financial Times published Monday.

“It is my understanding that there is no such idea in the minds of the U.S. side nor in the mind of President (Donald) Trump,” the British newspaper quoted Abe as saying.

And in a visit by the Vietnamese leader to Japan, Prime Minister Abe indicated his strong support for Vietnam in its South China Sea policy

Prime Minister Shinzo Abe and his Vietnamese counterpart, Nguyen Xuan Phuc, agreed Monday (October 8, 20188) to work together to maintain peace and security in the South China Sea, where Hanoi is engaged in a territorial dispute with Beijing.

During their meeting at the Prime Minister’s Office in Tokyo, the two leaders also confirmed their readiness to promote free and fair trade through regional trade agreements, including the 11-member Trans-Pacific Partnership, despite the spreading protectionism trend.

“Going hand-in-hand with Prime Minister Phuc, I am determined to realize the free and open Indo-Pacific region,” which covers the South China Sea, Abe said in a press conference.

In short, Prime Minister Abe is seeking to expand Japan’s role in the defense of the region but doing so by intertwining the evolution of Japanese policy with those of key allies.

It is about Japan playing an expanded role in a deterrence in depth strategy.