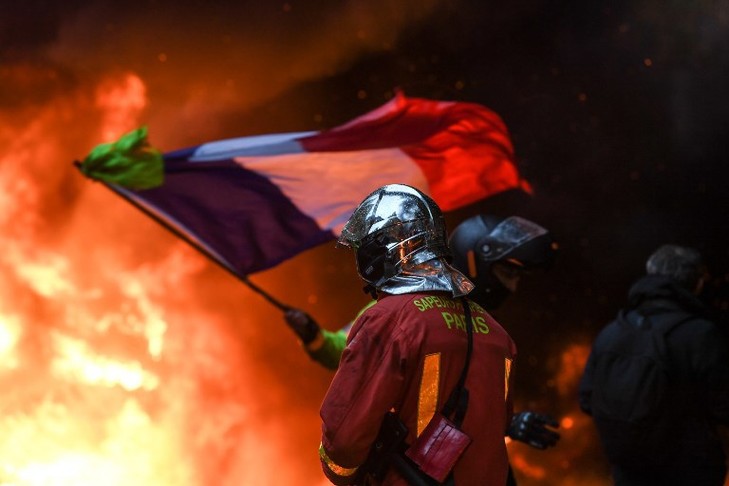 The unprecedented violence which burst out in parts of Paris and several cities in the French country last Saturday has stunned many foreign observers. Many non-French analysts simply take the easy road out — they blame such a phenomenon on the fact that revolutions and rioting are a deeply-rooted French tradition.

If there is some historic truth to this because of the well-known 1789 revolution and “May 1968,” the right to peacefully demonstrate is as embedded in the French culture as the right to carry a gun in America.

But the government and the population are not only used to it, but is pretty well organized to cope with it.

What is currently happening in France has a different spin to it and is forcing the Macron government to review a national security approach.

This is not business as usual as France faces the challenges posed by urban guerrillas whose actions and impacts are not limited to France.

What initially emerged as a spontaneous grassroots Facebook rally for a protest against rising fuel taxes – hence the symbolic wearing and appellation by the demonstrators of “Gilets jaunes”(GJ), i.e. the high-visibility (yellow) jackets any French citizen must have in his car and wear by law in case of a breakdown – started with a first series of actions ranging from protests to road blocking on November 17th.

Close to 288 000 people gathered in about 2000 sites across France and caused already that day one death and more than 400 wounded, mostly because of traffic accidents.

By the evening, thugs joined the party like they often have done in the past to take advantage of the lack of order to steal, break and set cars on fire.

After three weeks of protests, the Ministry of Interior figures amount to about 800 wounded and four deaths and is extremely worried about the announced “Act IV” planned the coming Saturday.

Time as a factor to solve the crisis has been critical as the ownership of the movement by various groups with very diverse agendas has been continuously spreading making it hard to get a grip on as there is no single epicenter of protest and focus.

First, there are the classic thugs.

These are individuals and groups who are violent and determined to use the chaos to steal and destroy.

They were massively present last Saturday in Paris and come from the suburbs.

Second is the political opposition, which sees a combination of the ultraright and the ultraleft.

But also the more moderate Republican and Socialist Parties are involved now as well.

All of whom see an opportunity to carry its own agenda at the eve of the next European elections, because the movement initially was one which had 80% support of the population.

Third, there is the internal radicalization of the movement itself, in which the older generation leadership is being replaced by younger more violent protesters.

Some of the initially calm protesters turned astonishingly violent last week-end due to the knock-on effect of the ignition of confrontation by ultras (left and right), Black Blocs, anarchists and “zadistes” (i.e. militant occupation by anticapitalist squatters of a site to oppose a development project.1

Even more troubling, there is also now a potential for an internationalization of the movement beyond – and in part because of – its infiltration by international groups.

There is already a contagious impact on some European neighbors (mainly Belgium so far).

Next there is the meddling by foreign actors seeking to put oil on the fire (e.g. Russian Channel Rossiya 1’s newsshow « Vesti » anchorman Dmitri Kisselev accusing the United States to be behind a “revolution” to fight the emergence of a European Army 2

Thirdly, there is the growing insertion of the migration debate – with its obvious domestic implications -as President Macron is supposed to sign what is referred to as the « UN Marrackech Pact » during next week’s “Intergovernmental Conference to Adopt the Global Compact for Safe, Orderly and Regular Migration” 3

What this leads to is the demand for the Macron government to need to deal with what one might call “homeland peacekeeping.”

First, the social anger and the now endless list of political demands is the result of decades of benign neglect by past governments on multiple issues (including the growing daily violence encountered in some suburbs against anyone wearing a uniform, such as the firefighters).

Second,  as in other Western democracies, the French society is fractured in part because of the impact of the new media and its impact on social cohesion.

Third, Emmanuel Macron and his new party were elected by rejecting the old establishment and on the promise to reform the old political system.

But by getting rid of the traditional intermediaries between the government and the people (i.e. political parties, trade unions, etc.), President Macron is now held personally responsible for all the misery the “GJ” are denouncing and has no buffer, nor legitimate obvious interlocutor, to negotiate with.

But there is as well a short-term and long-term key set of issues the French government is facing right now that has to do with the evolution of the use of security forces on the national territory in order to counter unprecedented attacks and violence lead by urban guerrilla professionals.

If one wants to see them in action, last spring’s confrontation during the evacuation of the Zadistes occupying Notre-Dame-des-Landes is the perfect illustration of their preparedness: use of fire and acid, barricades filled with gas containers, use of drones.4

The lessons learned are there on both sides, except that in the current events, the context is very different and the French security forces – composed of police, gendarmerie as well as forces depending on the Paris Prefecture – cannot use the same means – such as armored vehicles – given the risks of escalation.

Criticized for his bad assessment and management of Saturday’s events, the Minister of Interior, Christophe Castainer, who just took office last October, testified recently at the National Assembly and pointed out the following:

What happened unfortunately is that, first of all, the need to protect official buildings and national symbols (i.e. the Elysée for instance) froze part of the manpower necessary to block the most violent attacks (some in the Police suggests using the military for that kind of “static” mission.

However, the risks of a military response in case of attacks raise another complicated legal and constitutional challenge in France.

Also, diversion tactics were quickly used by violent groups, which kept the security forces so busy protecting lives and defending shops and buildings, that very few peaceful protesters could demonstrate, while the Arch of Triumph was literally “taken” back and forth – and vandalism took place in various parts of the city.

There are a number of initial lessons learned and recommendations being discussed by the government.

First, the security forces need a new employment doctrine allowing them to favor mobility and contact over their traditional static defensive tactics keeping the rioters at bay.

Second, the means or tools available to the security forces must be revised, as the latter suffered from a major decrease in personnel since 2008, but then, were asked to quickly train new people after the 2015 Bataclan terrorist attacks, without enough human resources, infrastructure and equipment.

The end result has been in the past couple of years an accelerated course of training, with lack of or aging equipment not adapted to today’s difficulties (thugs and ultras are extremely mobile, which is one of the reasons they were not arrested along with the less accustomed rioters in the past weeks.

And now the security forces face the challenge of using some of the new equipment as well.  A case in point is the challenge of coping with the sheer weight of the new anti-terrorist flag jackets the forces have to wear while they are struggling to maintain order.

Third, there is a clear need to re-balance priorities within the Police between daily proximity police and law and order and quasi “peacekeeping” missions.

Finally, there is a need for a re-balancing in intelligence gathering essentially focused on anti-terrorism in the past years and not enough on the general evolution of the society, in which “digitalization” has made it harder to connect with the way it could be done in the past.5

These are issues discussed in the recent past, but they were never considered priorities till now.

Clearly, the challenge of dealing with a significant urban guerrilla upheaval requires new measures along these lines but there need to be other changes in a “whole of government approach,” notably with regard to judiciary and imprisonment reforms as well in which these tools become more effective in shaping an effective approach.