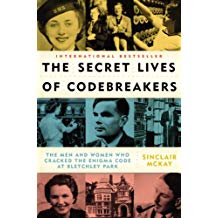 This 2010 book on life inside of Bletchley Park provides a unique look at the institutional life at the famous codebreaking center and how it worked.

It provides a sense of the elite quality of the organization at the outset and how it grew into a cross-cut of UK life and shaped a “university” of code breakers working and learning together how to deal with the flow of German intelligence and how to work that intelligence to the benefit of the UK and its core allies.

Reading through the book allows one to linger over one’s favorite stories about Bletchley Park and think about their relevance beyond the history of the time.

“Suddenly one night something very strange happened. I may have dozed off before the fire – a dangerous thing to do as I often smoked a pipe and might have burnt a hole in my landlady’s carpet, or worse – and perhaps I woke up with a start and the faint trace of a vanishing dream in my head. Whatever it was, I was left with a distinct picture –imagined of course – in my mind’s eye of a German Enigma operator. This was the trigger that was to set off my discoveries.” 1

Another was how the innovative operative leaders at Bletchley leveraged Churchill’s one visit to Bletchley. Not unusually, the normal processes were constraining what the teams needed to succeed and there was an opportunity with the Churchill visit to do an end around on the UK’s bureaucratic layers.

In a letter written directly to Churchill after his visit on a day on September 1941, Alan Turing and other leaders wrote directly to the Prim Minister to make a special plea for more staff to make their efforts really pay off.

“Dear Prime Minister: Some weeks ago you paid us the honor of a visit and we believe that you regard our work as important…..We think, however, that you ought to know that this work is being held up, and in some cases is not being done at all, principally because we cannot get sufficient staff to deal with (the “bombes,” i.e. the machines for processing enigma data.” 2

A third example of what one can find in this book is the fascinating detail that the enigma machine was developed for commercial but not military needs. The British had a chance to buy the machines but did not find them of commercial interest.

“Enigma had been on the market since 1923, when it was used by a few commercial banks to make sure their communications were kept secret….The British War Office felt that it would be too ungainly for use in the field.” 3

A fourth example is about technology. With the team lead by Turning, the Bombes, became translated into the preliminary first computers by Dr. Thomas Flowers, who designed the Colossus codebreaking machine, which was the forerunner of the modern computer.

You might ask, with this thrust from Bletchley Park, how come the British did not become the computer power of the post-war World?

Perhaps the answer lies in the world of secrecy and the various significant challenges facing Britain after the war.

But just having developed a technology is not equivalent to laying a foundation for long-term global technological leadership. Certainly, a lesson which certainly remains relevant to our day.

“Captain Jerry Roberts articulates what he believes that Britain lost, thanks to that insistence on absolute post-war security. He is still furious on behalf of Tommy Flowers today: ‘Dan Brown wrote a book called Digital Fortress. And he says in that that the computer was invented at Harvard in 1944. That is the damage that has been done.”

“Part of the trouble,” Captain Roberts continues, “was that the Colossus machines were all destroyed, except two which got away. There were 10 machines – eight were dismantled and destroyed and two were kept at Cheltenham at the new GCHQ.”

“It was at the orders of Churchill. He didn’t want to reveal anything to the Russians. But this meant – crucially – that Britain couldn’t develop this new computer industry.” 4

There are many stories woven into the book which provided insight into history and food for thought for our times.

A book well worth reading.