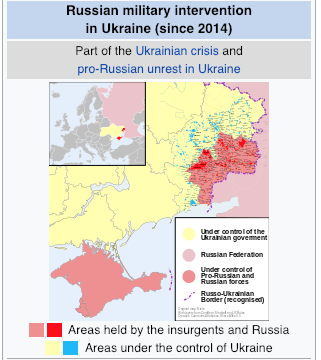 Recently, the Canadian House of Commons, Standing Committee on National Defense, released its most recent report on Russian aggression against Ukraine and against the Black Sea Region states.

In that report, it was noted that “Ukraine is determined to counter Russian aggression and to continue to fight pro-Russian forces on its territory.

“As Mr. Gerasimov told the Committee, Ukraine is not just fighting to protect its territory and population against Russia, but also to protect the rest of Europe. He emphasized that “[Ukraine is] on the front line of the whole free world’s battle” with “very bad guys.”

The full report is provided below, but we would like to highlight some of the testimony presented at the beginning of the report, which follows.

The Committee was told that Russian aggression against Ukraine has escalated in recent months. Mr. Artur Gerasimov, Chair of the Verkhovna Rada’s (Parliament of Ukraine’s) Subcommittee on Military-Industrial and Military-Technical Cooperation, spoke about Russia’s “huge militarization” of Russian-occupied Crimea, which includes not only an increase in the number of Russian forces serving in the region, but also the construction of additional fortifications, airfields and military installations, as well as the deployment of modern high-tech weapon systems capable of reaching southern Europe from Crimea.

According to him, the “full restoration of nuclear weapons facilities” on the Crimean Peninsula is of grave concern to Ukraine.

This nuclearization of Crimea includes the re-activation of land-based nuclear weapons facilities, such as the one at Balaklava, and the transfer of nuclear-armed warships and submarines to the naval base at Sevastopol. It also includes the deployment of nuclear-armed combat aircraft at several modernized and refurbished airfields in Crimea.

Mr. Gerasimov also expressed concern about the ongoing conflict in the Donbas region (the Donetsk and Luhansk oblasts) of eastern Ukraine and the recent deterioration in the situation on the ground. He noted that at least 70% of the 40,000 pro-Russian forces fighting in the Donbas region are “regular Russians and foreign terrorist fighters from the Russian Federation.”

Most of the weapons and supplies in the Donbas region are of Russian origin, and have been brought into Ukraine through the portions of the Ukraine–Russia border that currently are controlled by pro-Russian forces and are uncontrolled by Ukraine’s government.

The Committee was told that Russia regularly moves troops, equipment, ammunition and supplies across those parts of the border, often covertly under the guise of humanitarian convoys. These weapons and supplies are helping to strengthen pro-Russian forces in the region, and are being used against Ukraine’s civilians and military personnel.

In their discussions with the Committee, the Ukrainian parliamentarians repeatedly referred to the armed conflict in the Donbas region as an actual “war.” Mr. Yurii Levchenko, Chair of the Verkhovna Rada’s Subcommittee on Assessment of Bills, emphasized that it is “not some sort of frozen conflict,” but rather “a war.”

Fighting in the region is continuing, and the number of civilian and military casualties is rising. The Committee was informed that, every month, an average of more than 10 members of the Ukrainian Armed Forces are killed by pro-Russian forces in the region.

Altogether, more than 3,000 Ukrainian Armed Forces personnel have been killed since the beginning of the conflict in 2014, and another 300 are missing in action.

These statistics do not include civilian losses. According to the United Nations (UN), more than 3,000 civilians have been killed, and more than 9,000 have been injured, in eastern Ukraine since 2014.9 In addition, many Ukrainians and Crimean Tatars are held under pro-Russian control in prisons in Russia, Crimea and the Donbas region.

The Committee heard that the International Committee of the Red Cross and other international humanitarian organizations have been denied access to these prisons, which makes it difficult to verify the exact number of people detained by pro-Russian forces.

Mr. Levchenko said that those who are returned under prisoner swaps are usually in “terrible condition,” having been beaten and tortured. He noted that some have missing teeth, while others have broken bones, and many have suffered from sexual violence. In his view, “[i]t shows clearly … the way that the Russian troops and the Russian occupation administration treat our prisoners.”

Pro-Russian forces continue to perpetrate violence and acts of aggression on a regular basis, and the Committee was told that these forces repeatedly violate ceasefire arrangements. Mr. Levchenko pointed out that Ukraine has announced ceasefires on 13 occasions since the beginning of the war in 2014, and all of them have been broken.

According to him, the latest ceasefire – which was announced in March 2018 – lasted for only 10 minutes.

As well, Mr. Levchenko commented that pro-Russian forces “constantly shell critically important infrastructure” that “provides fresh water” and other “relevant services for the people,” causing a great deal of hardship among the local civilian population.

He also noted that pro-Russian forces are using Ukrainian Armed Forces personnel and civilians as “target practice” for their troops. He said that “[i]t’s not just unprovoked shelling, but constant sniper fire on our positions, also unprovoked,” and added that – over the last few months – Ukraine sustained “a marked escalation in sniper deaths.”

Land mines are also a problem. The Ukrainian parliamentarians informed the Committee that approximately 7,000 square kilometres of Ukraine have been mined, which is an area that continues to grow. According to the UN, more than 1,600 civilians have been killed or injured by mines since the beginning of the conflict in Ukraine in 2014.

Mr. Levchenko believed that Russia is mining large parts of Ukraine “to make it as hard as possible for this territory to go back under Ukrainian control.”

The ecological situation in the Ukrainian territories that are occupied by pro-Russian forces is another challenge. The main issue is the flooding of old coal mines, many of which were previously used as nuclear waste storage facilities. Mr. Levchenko explained that, “[w]hen we were in control of our territory, we spent quite a lot of money and resources to pump this water out of the coal mines,” but pro-Russian “occupying forces have simply decided not to use any resources for this,” and have instead chosen to ignore the problem.

Approximately 30 coal mines, including the Yuncom coal mine that was used to store radioactive nuclear waste, are currently flooded. He characterized the situation as “a huge problem that can cause huge swaths of our territory in the Donbas region to become uninhabitable,” and pointed out that large towns with hundreds of thousands of people are located near those mines and could be affected. In his view, this situation will only complicate “any return to normalcy” once Ukraine eventually retains control of its territory, and said that this problem could result in a major humanitarian crisis and environmental catastrophe in the coming years.

According to Anders Aslund, Senior Fellow with the Atlantic Council’s Eurasia Center, the Russian-occupied Donbas region has become a “real hellhole” as a result of the armed conflict. He explained that one half of the region’s population of almost 5 million people has fled, and that all business activity is “standing still.” In providing an example, Mr. Aslund noted that the Donetsk oblast has an “elementary food industry and shops,” but “hardly anything more,” and added that all of the banks have been robbed.