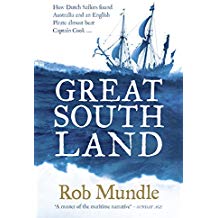 Rob Mundle is a very good writer focusing on Australia’s maritime history. In this book, he provides a fascinating look at how European explorers over time filled in the map in the ability of Europe to learn that Australia was really a continent, not a set of islands.

The Spanish came first, but that exploration became classified information for the Spanish king as they did not want to help anyone else out to know where the unknown world might actually lie and look like.

The Portuguese and the Dutch were focused on the Spice Islands and other explorations to support their trade interests. As the various Dutch merchant ships, which were that more than explorers, discovered the coasts of “New Holland,” there was only limited Dutch interest because what they saw was not promising in terms of trade, the primary interest for the Dutch.

New Holland might have become just that if the Dutch had colonized the lands, which they saw from their ships and from time to time came ashore.

The book starts with January 1688 and takes the reader through a series of maritime travels and adventures until just before the arrival of Captain Cook and his landmark engagement with Australia and setting in motion the British era for the new continent.

The book provides the reader with a real sense of adventure with regard to what it was like to be engaged in maritime trade and exploration in the years prior to the arrival of Captain Cook. These Europeans were more like modern explorers in outer space than simply conquerors and the author provides a vivid sense of the dangers and challenges which these intrepid seamen faced in the South Pacific and beyond as they began to shape the map of what would become Australia.

As the author noted with regard to the Dutch: “Even as the United East India Company increased its dominance in the spice trade, its attitude towards the Great South Land remained essentially unchanged.” 1

“Amid the giant, wildly careering waves were two relatively small ships, each running downward and carrying the minimum amount of heavy canvas sail. Just about anywhere else in the world this sight would not have been out of the ordinary – except, possibley for the powerful nature of the storm – but these two ship were traversing an ocean where no man or vessel had previously ventured.” 2

Tasman would be the first man to circumnavigate Australia, but because he rarely went ashore, the recognition of what he and his crew had experienced was not fully realized. And the author notes that if Tasman had sailed a bit differently in the area.

“What if he had ventured just an additional 200 nautical miles north from the north-east corner of Van Diemen’s Land and discovered the eastern side of what would later be known as New Holland? It could well have caused world history to be very different from what it is today: New Holland might have become just that.”3

The final third of the book deals with the fascinating British explorer, pirate, writer, navigator and tradesman, William Dampier. With just a twist or turn of his engagement in the region, he might have been the man credited with what Captain Cook would come to achieve a few years after the explorations of Dampier.

“What might have happened had he discovered the east coast of the Great South Land some seventy years before Captain Cook can only be surmised….” 4

The author quotes the tribute to William Dampier to be found on the walls of the medieval St. Michael’s Church in his home village of East Coker:

“To the memory of William Dampier. Buccaneer, Explorer, and Hydrographer and sometime Captain of the ship Roebuck in the Royal Navy of King Wiliam the Third.

“Thrice he circumnavigated the Globe and the first of all Englishmen explore and described the coast of Australia.

“An exact observer of all things in Earth, Sea and Air, he recorded the knowledge won by years of danger and hardship in Books of Voyages and a Discourse of Winds, Tides and Currents which Nelson bade his midshipmen to study and Humboldt praise for Scientific worth.” 5

When one hears travellers complaining of the long flight from Europe or the United States to Australia, one might recommend this book and see the courage which the seaman of the discoverers of Australia demonstrated.

It put things in place.