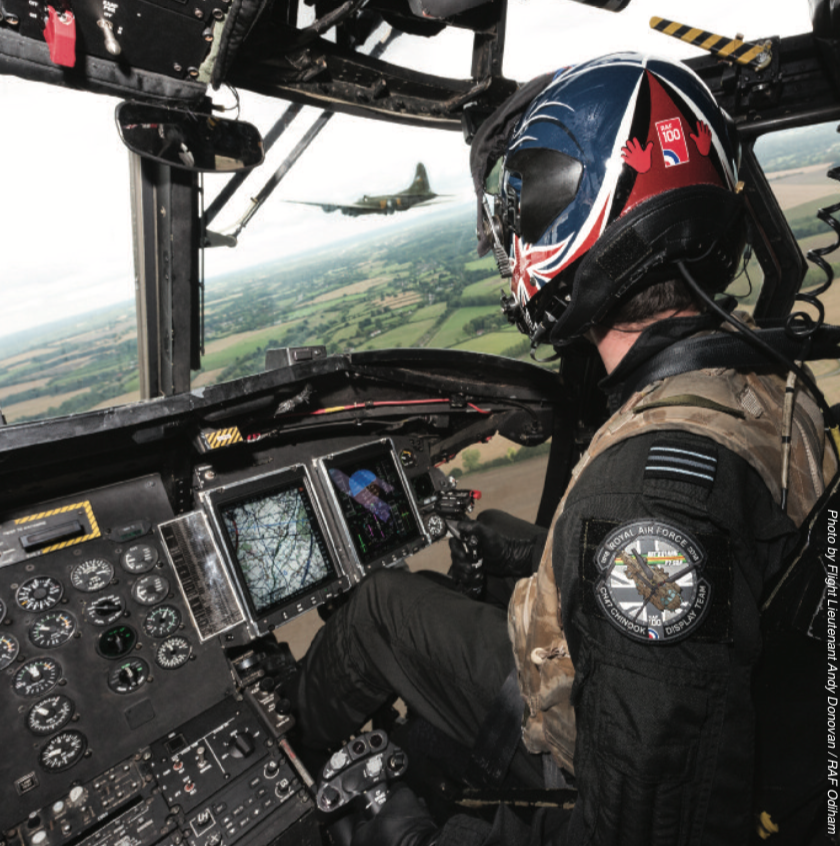 Sally B’s last air display of the 2018 display season was at the Battle of Britain air show at Duxford on the 29/30 September, this was a hugely delightful show, where else would you see 18 Spitfires in formation – what a sight!

Thus, our B-17’s 43rd display season ended on a high – another most successful display season for our aircraft. Sally B behaved well throughout, even Smokey Joe did not let us down, often hesitant, but with a little smooth handling from the pilots, did eventually start.

The weather also played ball, during this incredible hot Summer we only had to cancel two displays when the weather turned against us, so all in all things went very well.

Sally B went in to Hangar T2 North at the end of September for another Winter’s rest while the annual Winter maintenance is taking place.

A Most Unusual Formation  Flight

At the RAF Odiham Families Day on the 29th August, the public were privileged to see Sally B fly in formation with a 2018 RAF Chinook Helicopter – this is how it came about:

It all began ten days earlier at the bar in the DeVere hotel during the Biggin Hill Air Festival when I met the 2018 RAF Chinook Display Pilot, Flight Lieutenant Stu Kynaston.

We got talking about the aircraft we flew and when I mentioned that we would be displaying at their Homebase, RAF Odiham, the idea was formed that to generate a formation flypast with our B-17 Sally B and the RAF Chinook display helicopter would be something very special!

As you all know, most good ideas are born in a bar, but I did not expect this idea to survive – but I was wrong.

A few days later I received an email from Stu telling me that he had found a good reason why we should fly together and that he was willing to approach his chain of command if I was willing to do the same with mine. One of his reasonings was that as Boeing sponsored the event and as both the Chinook and B-17 were Boeing military aircraft, this  was a reason as good as any.

Stu petitioned his commanding  officers while I spoke with Elly Sallingboe to ask for her permission for it had to be agreed by both parties. A lot of paperwork was produced to make this happen and, in the end, both parties, the RAF and Elly, said that we could go ahead.

So, on Tuesday 28th August after a very extensive briefing, we took off from RAF Odiham and flew in formation with the Chinook.

With all flying matters and possible eventualities covered during the briefing, the formation flight was not difficult to do. During our one pass together, I had 10 degrees of flap just to keep the speed down a bit as the Chinook flies slower than the B-17. At the end of the runway, we broke away from the Chinook to start our solo display.

It was a good to be able to support the RAF 100 festivities by flying two very special Boeing aircraft in this one-off formation. Stu said it was amazing from his perspective and his co-pilot Andy Donovan was able to capture this magic moment from inside the Chinook.


Its the holiday season and as we provide our content freely to our readers we do ask that you consider a contribution to our partner Sally B.

This is an unusual offer which they are providing worth considering for some of our readers.

Donate £395 (non-members £460) or more to help keep Sally B flying and have your name or a name of your choice added to the prestigious Roll of Honour on the outside of Sally B’s fuselage for one whole year, AND spend a special VIP day with our B-17 at Duxford on SUNDAY 11th AUGUST 2019.

We will recognise your generous support by: adding your chosen name to the Roll of Honour for one year; inviting YOU AND ONE GUEST to join us for this special day at Duxford when your chosen name will be unveiled and you will have; exclusive use throughout the day of the AirSide

Suite in the superb “AirSpace, ”with Sally parked on the tarmac right outside for your enjoyment throughout the day; seeing Sally B fly just for you!; enjoy a buffet lunch in the company of Sally B’s operator, pilots and team leaders with refreshments available throughout the day ; talks on Sally B by her operator and crew and your own corporate parking space; enter your name into a draw for the once-in-a lifetime chance to be trained as a crew member, including an orientation flight in Sally B* And your name will be entered into a draw for a taxi ride in Sally B.

This is truly a day to be remembered and, as a Roll of Honour participant you will be playing a vital part in helping to ensure the future of Sally B.

You can also send your donation to: The B-17 Charitable Trust, PO Box 92, Bury St Edmunds, Suffolk IP28 8RR