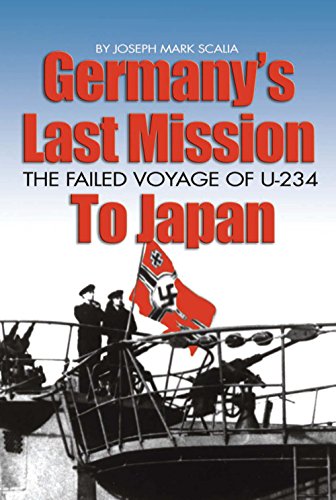 This book by Joseph Mark Scalia and published in 2000 by Naval Institute Press provides a comprehensive look at one of the most neglected stories of World War II, namely, the mission of U-234 to Japan.

The submarine turned out to be the last gift of Nazi Germany to Japan and was designed to deliver both advanced war materiel as well as technicians to aid the Empire of Japan in its fight to the death with the Americans.

While at sea, the Reich surrendered but the Captain at first ignored the orders to surrender but later sorted out how to avoid surrendering to the Brits via Canada and came to America. Then at Portsmouth, the US Navy then sorted out what to do with the prize.

Given that the war with Japan was still unfinished, the key focus for US intelligence was to sort out what the Germans had actually transferred to Japan and how much advancement the Japanese had made in terms of new technologies.  The information gained was invaluable in providing a more accurate assessment of what the US would face in the Japanese invasion.

The book provides a first-rate assessment – leveraging the mission of the U-234 – of the German and Japanese military technological relationship. Prior to the German invasion of Russia, the Russians allowed the use of the trans-Siberian route between Japan and Germany to provide a direct link.

After that only the sea route was available and after the US and the allies gradually gained mastery of the seas, the two sides used submarines to transfer war material, a complicated, difficult and slow process.

A key conclusion was that there was basic distrust between the two authoritarian regimes which limited the full extent of cooperation possible. Also, the significant disconnect between the two regimes with regard to science, technology and military production limited the ability of the Japanese to incorporate German scientific and technological advances.

The Japanese demonstrated without doubt that the ability to transfer science and technological advances TO production was the key; not just knowing about S and T advances.

“By December 1944 Japan’s hopes for remaining competitive in the air rested primarily on the availability of German aid.

“However, German observers in Japan were frustrated by what they perceived as an ignorance of efficient construction methods, as well as by the lack of standardization, technical personnel and machine tools.

“Japanese officials sought to address these deficiencies by buttressing their own antiquate manufacturing processes through the acquisition of modern German equipment, securing the production rights to German innovations, facilitating the training of Japanese engineers in Germany and obtaining the services of German technical and manufacturing personnel.” 1

This is an historical observation but we are facing a similar collaboration between two authoritarian regimes today also designed to make the world safe for their approach as opposed to that of the democratic world.

I have studied the Russian-Chinese relationship since graduate school and it is clearly entering a new phase of collaboration, but clearly shaped by how authoritarian regimes work with one another.  But clearly, Sino-Russian collaboration is a major factor shaping the decade ahead in terms of forging the next phase of global development.

And speaking of contemporary relevance, there is this priceless observation about collaboration between the US Army Air Force and the US Navy over sharing the goodies onboard the U-234. As the US Navy got custody of the U-234, it parceled out only what it thought relevant to anyone else.

“Having been unpacked and inventoried, the bulk of U-234’s aviation cargo was eventually sent to the U.S. Army Air Forces testing facility at Wright Field in Dayton, Ohio.”

However, let us not get over generous!

“Although naval officials immediately sent the ME 262 and 165 to the AAF, they balked at surrendering the remainder of their war prizes to a rival service and withheld the remaining accessories until naval air authorities could exploit them.”2

Thank God that would not happen today!

There was a key material onboard the U-234 which is part of another story as well.  Onboard the U-234, there was a considerable amount of German produced uranium oxide. Could the cargo have been used by the Japanese to execute a mission to deliver a dirty bomb?

Although uranium oxide is characterized by a relatively low level of radioactivity, creating a bomb from the material would undoubtedly have some effect, and notably a psychological one.

The book concludes with a look at the uranium oxide cargo onboard the U-234 and suggests this still remains one of the mysteries of the U-234.

Others have suggested that the Japanese were intending to load this material onboard the Japanese submarines which had been built to launch airplanes and to deliver a strike on San Francisco in mid-August 1945.

Given that U-234 never made it to Japan, this is a case of a bit of history that did not happen.