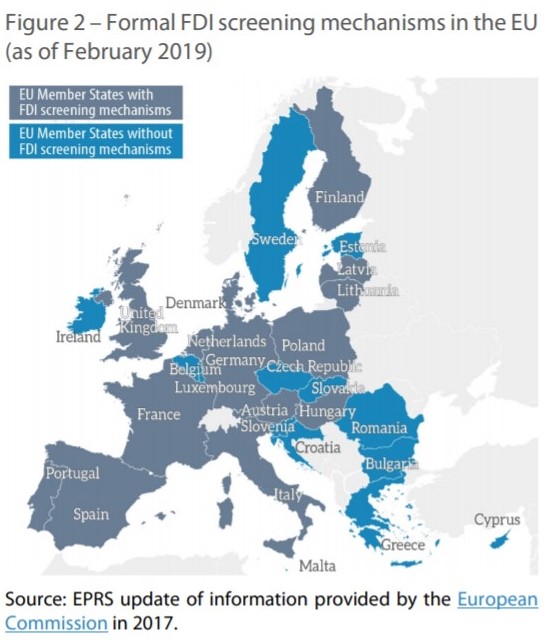 The European Union’s adoption on March 21st of a new “framework for the screening of foreign direct investments into the Union,” as published in the Official Journal of the EU, is a major step forward towards a growing common awareness on the Old Continent about the risks involved in unchecked foreign investments.

It also reflects the beginning of some form of unity on a long-standing issue that could never get passed the form of EU Parliament Resolution at best, like the call made in May 2012 entitled EU and China : Unbalanced Trade ? which happened a year after the attempted takeover of Dutch cable-maker Draka by the Chinese company Xinmao.

Even though China is not explicitly targeted, the timing of this new legislation as EU leaders meet for two days within the European Council in part to prepare the upcoming EU-China Summit planned for April 9th is no accident.

“China can no longer be regarded as a developing country.”

This sentence, which comes from the latest European Commission Report on the state of relationships between the EU and China and ten-point plan of action to address the latter in a new balanced way,  sums up the change of mood in Europe regarding everything Chinese.

One can identify several triggers to such a switch. Intersecting all these trends is the awareness that Europeans have to protect their industrial base for economic reasons of course, but also for security reasons like used to be the way at the height of the Cold War.

Infrastructure and mobility are for instance now hot topics in the EU, each member being for instance required by the end of the year to establish national plans for military mobility and focusing on improving interoperability.

The same goes about cybersecurity, as the debate about Huawei’s 5G mobile network investment in Germany (with the US warning about restricting intelligence sharing with Berlin if the deal goes on) shows (to note, there is a similar debate in France, but the battle in this case is more about “digital sovereignty” and the promotion of a European champion able to compete with the GAFAs, which are now required to pay a tax based on their revenue made in France).

Indeed if China is mostly targeted, Russia is also part of the motivation and the reason why Nordic countries went finally on board with the new screening legislation, which rapporteur is French conservative (“Les Républicains”) Franck Proust, member of the European Parliament.

So what does this new legislation really mean ?

One can compare the new mechanism to the US CFIUS established since 1975 in the sense that it provides a way to monitor foreign direct investments on a EU-wide basis. The regulation states the main objective –  i.e. « provide (…) with the means to address risks to security or public order » – the following way :

If national means to do so exist in some countries, it is not the case in all of them, while policies and preferences differ a great deal among them.

Article 8 of the regulation details the range of investments targeted as they affect “those projects and programmes which involve a substantial amount or a significant share of Union funding, or which are covered by Union law regarding critical infrastructure, critical technologies or critical inputs which are essential for security or public order.”

That includes dual-use technologies – such as artificial intelligence, robotics, nanotechnologies, etc -, but also sectors related to energy, data processing ans storage, health, transportation, communications… The supply chain and access to strategic resources (including food security)  should also be affected. Cyber also, with, in addition a new focus on access to personal data, as well as on media freedom….

An annex related to Article 8 indeed lists some specific programs connected in particular with space, telecommunications, energy and transportation:

The mechanism is one of exchange of informations and is non-binding however.

It requires member states to inform the Commission about foreign direct investments when relevant, but other member states can only comment :

(17) When a Member State receives comments from other Member States or an opinion from the Commission, it should give such comments or opinion due consideration through, where appropriate, measures available under its national law, or in its broader policy-making, in line with its duty of sincere cooperation laid down in Article 4(3) TEU.

Having to balance legitimate security concerns with as legitimate sovereignty considerations based on free trade, the legal impact of the text and being “opinionated” appears therefore limited.

Such a move should therefore be considered more like a framework for cooperation allowing to monitor and  filter in order  to “retain the best,”as Franck Proust describes it, as well as a warning mechanism.

The worry expressed by some analysts and business lawyers is however three-fold.

First, it may affect the reputation and competitive edge of the EU as the most welcoming trade partner at a time of slow growth when investments are crucial. Indeed, with the value of exchange of goods between the EU and China larger than1.5 billion euros a day, the EU is China’s biggest trading partner and China is the EU’s second after the United States.

The stakes are high and many European countries – especially those without a strong industrial base – desesperately need these investments – whether in infrastructure like the 16 + 1 Group – a group gathering 11 EU members and 5 Balkan countries under the initiative of China and focusing on the funding of projects such as the Belgrade-Budapest High Speed rail, or other ares such as health (recent shortages of drugs in Europe have highlighted our overall dependency on Asia in this crucial public health field as well…) -.

Second, even though not constraining, the regulation may be enough to discourage investors, as more time, uncertainty about feasibility and therefore cost could be the ripple effects, especially for firms with Chinese ties which will go under more scrutiny.

Third, it has already an impact on national legislations being reinforced or established, while the new regulation will be adding an extra layer in a bidding process complicated enough, and could be used to break deals or favor other competitors, even through mere political exposure and pressure.

It happened in the past both in the United States with the CFIUS system and in Europe just through resolution, and it is indeed the goal and the deterrent impact which the legislators hope to achieve with this new bold statement.

However, as the signing into law last summer of the Foreign Investment Risk Review Modernization Act (FIRRMA) by President Trump shows, the initial CFIUS mechanism seems to have been circumvented by Beijing via other means, such as  real-estate acquisitions and technology transfer through joint-ventures, to name a few.

The new battle emerging from Brussels means President Trump is not alone anymore in his efforts to deal with the Chinese challenge.

But then again, China and Russia do not have to comply to a levelled playing field in non- US and non-EU European areas…


This article was first published by Breaking Defense on March 26, 2019.