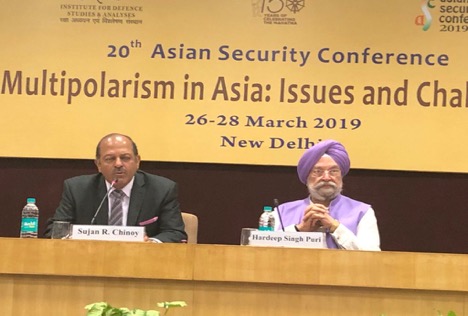 New Delhi. The multipolar reality of the global environment is becoming increasingly visible in Asia where a multipolar political, economic and security architecture is being shaped by regional powers. A significant question then is how will the much talked about Asian century be categorised – by cooperation, competition or contestation?

While China has been at the forefront of pushing multilateralism in Asia and beyond, other countries like India, Japan, South Korea and the ASEAN nations have also been focussing on getting more and more multilateral actors and institutions involved. In this age of diffused power, countries with varying capacities, such as the United States, China, India and Russia, are not seeking to form disruptive relations, but are relying more on forming multilateral connections to acquire additional leverage.

What gives the dialogue of the Asian century a lot of prominence in the changing global environment is the receptivity of the Asian countries to change. While there are differing conceptions as to what constitutes a common space and who dominates it, there is agreement on the necessity of ensuring economic integration for sculpting the future of Asia together. There are both bilateral and multilateral mechanisms for discussing competing agendas as well.

The Asian Security Conference organised by the Institute of Defence Studies and Analyses (IDSA) sought to discuss the theme of the state of Multipolarism in Asia and the various tectonic shifts that are driving it. This was the 20th edition of the flagship event organised by India’s leading think tank, IDSA, and was aptly titled “Multipolarism in Asia: Issues and Challenges”.

This conference generally brings together a host of experts on selected themes, from around the world for purposeful and policy-driven discussions. This year too, the event followed the same format to debate the various facets of multipolarism in Asia and the stakes and strategies involved. The conference included speakers from 15 Asian countries, as well as some from the United States, the United Kingdom, Europe and Africa. The Conference proved to be an appropriate venue for informed debate on multipolarism from the viewpoint of different stakeholders, representing their countries and institutions.

The three-day conference was divided into ten sessions involving approximately 50 speakers, from 30 foreign countries, and discussed issues that did not just pertain to multipolarism but also connectivity, the evolving Indo-Pacific order, the security concerns in the region stemming from historical differences and ongoing disputes.

The subjects were broadly topical, which would help policy-makers and scholars understand the prevailing trends in multipolarism and how major countries like the United States, China and India perceive it. Given the changing geo-political dynamic between Asia, specifically China, and the world, it has become pertinent for countries to strategically adapt their foreign policies towards each other, usually by making a move towards engagement, hedging or band-wagoning.

Ambassador Sujan R. Chinoy, IDSA Director General, opened the conference and in his welcome remarks offered a few comments on the key parameters of multipolarism in Asia, which has ruptured the previous geo-political and geo-economic asymmetries. As both dominant and aspiring powers like the US and China are anti the status quo, the Indo-Pacific remains a work in progress, characterised by hedging and multi-alignment.

The strategic landscape in Asia is being moulded by the power projections of big nations while the middle powers and small but strategically important states are undertaking a balancing act. There is also a greater tendency for Great Powers like China to turn a revisionist eye and seek to dominate oceans, seabeds, cyber and outer space, thus turning them into theatres of power projection and competition. Moreover, China and the US possess advanced technologies for exploring uncharted territories and get there faster than their rivals. The competition has thrown up a big question: will the powers that are act responsibly? That is, responsible enough to reassure their neighbours and other cooperating countries about their intentions for maintaining a peaceful and stable environment. In fact, by all existing conventions they are obliged to act responsibly.

Multipolarism, whether they accept it or not, is a great avenue for pushing such ‘responsible’ cooperation.

Quad, and Other Groupings

The Quad, a consultative grouping consisting of the US, India, Japan and Australia, formed an important part of the discussions during the Conference. The moot question was how the equations in the Quad would be furthered in the future and how they could become the determining factors in the framing of Asian multipolarism.

China is already a key trading partner for most Asian countries, and by promoting bilateral and multilateral links through trade exchanges and connectivity mechanisms, it is expected to contribute substantially to sustained peace and cooperation in the region. India too, is expected to fare better in economic terms, and therefore, take on a stronger, more sustainable role in a multilateral Asia.

In this regard, it will be a prerequisite for India to develop its security and military capabilities as well as economic to boost visibility in the neighbourhood, particularly the Indian Ocean, and push for the institutionalisation of the Quad or similar mechanisms in the Indo-Pacific region towards freedom of navigation.

The Indo-Pacific region is riddled with not just maritime chokepoints and trading zones but also political ambitions and the consequent flashpoints, particularly by China’s growing territorial claims southwards. The South China Sea is simmering with its claims over several islands, where it is building military facilities.

In the absence of a binding Asian doctrine, or a proper grievance-addressing mechanism, sovereignty is being contested almost on a regular basis on the high seas.

Countries with nuclear and strong military capabilities also threaten the peace and stability in the Indian Ocean and the various Pacific littorals. Non-traditional security threats have the power to wreak complete havoc but they also provide the countries with a redemptive opportunity to connect and empower each other. As discussed during the conference, the Chinese are already creating a vast network of friends and partnerships to join hands with them in the new type of security cooperation.

China’s long term objective seems to be to strengthen its own connections in a way that can even make its partner countries override other external concerns, including that of the US which has maintained a dominant presence in both the Indian and Pacific Oceans.

For instance, China’s acquisition and near ownership of Pakistan’s port of Gwadar in the Arabian Sea has given it vital reach to the Indian Ocean though the land route. Then, China also has presence in Maldives, Sri Lanka and Djibouti.

Concerns regarding non-traditional security threats are aplenty for India and other countries while the mechanisms to control them are scanty. As stated by Ambassador P. S. Raghavan, the Chairman of the National Security Advisory Board (NSAB), in his special address, India does not need external mediation but sustained, long-term cooperation.

The Pulwama terror attack was one of the worst acts of terrorism in Kashmir’s history. While initially the international community called on Pakistan to end terrorism, it soon deviated to other India-Pakistan issues. The major powers required India to exercise restraint – but what India actually requires from the international community is for it to deal proactively with a rogue state like Pakistan instead of engaging in plain mediation.

Distinguished diplomat Hardeep Singh Puri, now the Minister of State in the Ministry of Housing and Urban Affairs, in his special keynote address, highlighted the growing uncertainties or even more, the chaos that might ensue in the absence of multipolarism.

According to him, the World Trade Organisation (WTO) has already met with a stalemate, and the World Bank and the International Monetary Fund (IMF) do not represent the interests of the emerging economies adequately.

Now that the focus has shifted to Asia, it is important to push connectivity networks and transparent trading mechanisms that have not quite taken off. Moreover, if the Millennium Development Goals are to be achieved by 2030, boosting India’s performance, considering its rapidly growing economy, becomes essential.

This was first published by our partner India Strategic in April 2019.