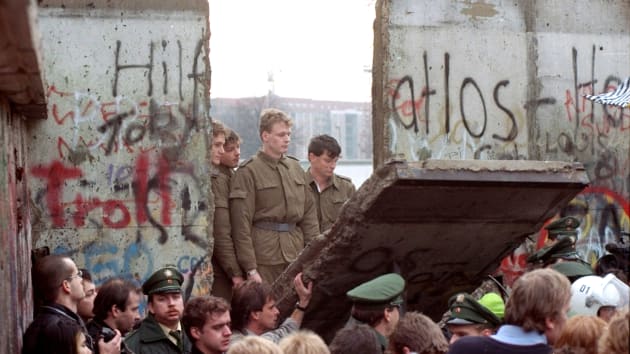 “You can’t describe what it really represented.”

Countless times this is what people describe as the Berlin Wall, what it meant for the East-West divide and what it represented for the German people.

Peter Robinson, author of Reagan’s famous West Berlin speech, claims that West Germany was colorful and full of life and East Germany was a black and white sight of despair.

But last week marked thirty years since the democratic hopefuls obtained a new reality, a reality where the wall no longer existed and where the announcement of free travel from East to West Germany would forever change the course of history.

With claims of a new Cold War, the transatlantic relationship in turmoil, and the rise of authoritarian regimes around the world challenging the United States and its fellow liberal democratic powers, it might be helpful to reflect on thirty years ago and what brought about this democratic success.

At an event titled “30 Years Later: Lessons from the Fall of the Berlin Wall” hosted by Georgetown University, The Atlantic Council, the Ronald Reagan Institute and the George & Barbara Bush Foundation a brief moment of reflection to address November 9, 1989 from the past, present and future was provided.

The fall of the wall did not happen overnight, it happened due to the tireless efforts of nine different administrations.

Two administrations will especially be remembered for their efforts, President Reagan and President Bush.

With the words, “Mr. Gorbachev, tear down this wall!” Ronald Reagan delivered a speech that will forever be remembered in history.

Peter Robinson was given the task to write this speech, a speech no one could have imagined to become so monumental.

He was given one direction: don’t mention the wall.

Yet, Robinson mentioned the wall. He mentioned it because he directly experienced what the wall and its effects were on the German people.

In the weeks leading up to the speech, he was invited to a dinner party with West Germans and he asked a question along the lines of:

Do you still discuss the wall?

The room became quiet and the hostess, a woman who had graciously hosted her guests all night, became suddenly angry.

“If Mr. Gorbachev is serious about Glasnost and Perestroika: the wall must go.”

This is the emotion that went into the speech that Reagan delivered on Friday, June 12th 1987.

A speech that went through seven different drafts and was vehemently opposed within the Reagan administration as being too provocative.

In the end, Reagan decided the line went in.

President Bush Sr. was the one that received the call on November 9th, 1989 – the wall had fallen.

What is he remembered for?

The way he reacted.

Many in the American public were shocked that he didn’t look “elated” in any way and was questioned as to why by the media.

Weeks later, Gorbachev thanked Bush for not “dancing on the wall”.

Then Secretary of State James A. Baker III remembered Bush for this modesty.

At his funeral, Secretary Baker stated that Bush was a man who offered “humility and not humiliation towards a fallen adversary.”

A lesson that politicians of today should remember, a lesson that Secretary Baker emphasizes.

At the event hosted by Georgetown University, Secretary Baker outlined three distinct lessons that the administrations of Reagan and Bush provided and how these can be used today.

One is domestic support, without the support of the American people- American foreign policy can not be properly implemented.

Two is strong alliances. “There was a time where “Pax Americana” was the north star of the European Union,”many have argued a collapse in this American led liberal order established after World War II.

What does a world look like where the US no longer is the international mediator? Baker warns against taking our allies for granted and he further pushes this lesson with a third and final point: clear-eyed diplomacy.

In the end, the enduring spirit of a captive nation is what led to the “fall of the wall” but the efforts of presidencies from Truman to Bush to build relations and instill trust in the American vision brought about what Baker refers to as “pragmatic solutions” that led to a peaceful end of the Cold War.

Taking a moment to reflect on the success of the Berlin Wall falling and the very notion that the end of the Cold War was brought without firing a single bullet is something that’s crucial to today’s political environment.

The art of diplomacy is not to be taken lightly and as noted by Ambassador Eric Edelman, it’s important to not be prone to vertigo when practicing it.

There will always be ups and downs, a success in diplomacy is one that is coated in additional diplomatic issues for future diplomatic minds to handle.

Diplomacy is a never-ending process and one that every nation should be proud to practice.

November 9th, 1989 will forever be celebrated as a great victory for the western democratic world and should be remembered as so.

However, with this victory, we must not forget the key lessons learned about diplomacy and alliances in a world that will only grow more interconnected as time goes on.

The featured photo shows East German border guards looking through a hole in the Berlin wall after demonstrators pulled down one segment at the Brandenburg Gate on November 11, 1989.Associated Press/Lionel Cironneau