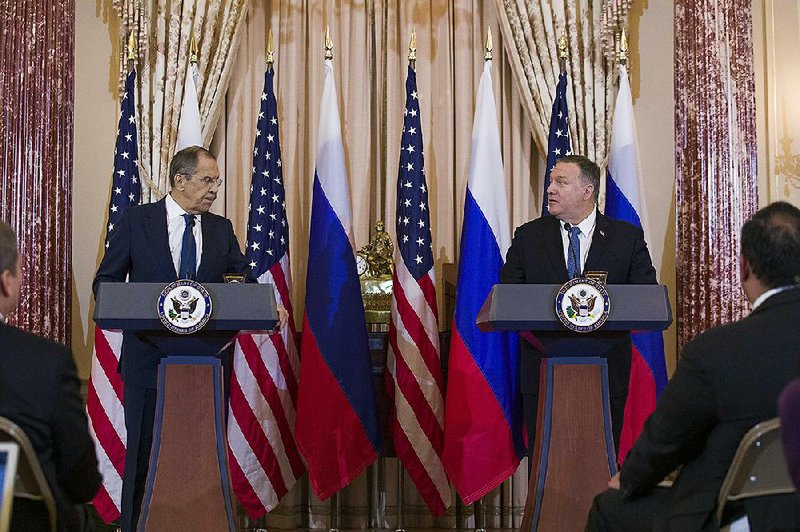 Based on the press conferences and releases, the Russian-U.S. meetings in Washington were wide-ranging and substantive.

However, they did not offer a clear roadmap towards that end.

Their statements basically exchanged views on numerous issues without explaining how they would resolve their differences on many of them.

The leaders discussed several areas of cooperation and disagreement. Among the former, they listed counterterrorism, Afghanistan, and North Korea.

Even so, Minister Lavrov in his later press conference at the Russian Embassy said the counterterrorism cooperation consisted mainly in reviving their regular interagency dialogue.

There was no detailed public discussion on Afghanistan.

Regarding North Korea, the two sides reaffirmed their mutual goal of excluding nuclear weapons on the Korean Peninsula, but Lavrov criticized the U.S. approach of focusing excessively on negative sanctions rather than positive inducements to encourage North Korean moderation.

The two sides discussed opportunities for further enhancing economic tries, which are already growing, which is surprising given the US economic sanctions on Russia and some Russian court cases against U.S. investors. They further said they would soon announce new bilateral initiatives in this area.

Although Lavrov and Pompeo said Syria was an area of progress, the Foreign Minister again made clear that, while they agreed on a constitutional reform process, Russia insisted that the Syrian government recover all Syrian territory, including the areas still occupied by U.S. forces, and that the Kurds and other U.S.-backed Syrian groups accept government control.

Pompeo expressed pride in the administration’s defense of Ukrainian sovereignty and called for the return of Crimea to Ukraine, while Lavrov downplayed the value of Washington’s assuming a higher profile in the Ukraine peace talks other than its joining with Moscow in pressing the new Ukrainian government to open a dialogue with the Donetsk and Lugansk separatists

The Russian and U.S. leaders of course disagreed over the allegations of Russian interference in the 2016 U.S.  presidential elections, the appropriateness of U.S. sanctions on Russia, and how to resolve their conflicting stances in these issues.

The discussion over New START was a bit confusing.

Lavrov clearly affirmed Russian readiness to renew New START, while expressing doubts that China would agree any time soon to limit its own forces through a trilateral treaty.

But the Foreign Minister said the deadline for negotiation was February 5, 2021, when the treaty expires.

This position is at variance with what I heard in Moscow—that the Russian government needed at least six months to secure Duma approval, and ignores that both parties could decide to follow New START requirements unofficially even without a treaty.

Meanwhile, Pompeo seemed to walk away from earlier administration interest in possibly extending New START, insisting that “all the relevant threats to strategic stability around the world” must be addressed in a future treaty, which would demand coverage of a very large and constantly changing set of items.

Also, the correct comparison for any treaty is not just New START versus something better, which is obviously possible and desirable, but will take time, but also New START vs no strategic arms control agreement, which would be worse than the current situation.

Secretary Pompeo also volunteered to discuss including Britain and France in an expanded arms control treaty, though, like China, neither of these governments have affirmed interest in participating in formal nuclear arms reductions.