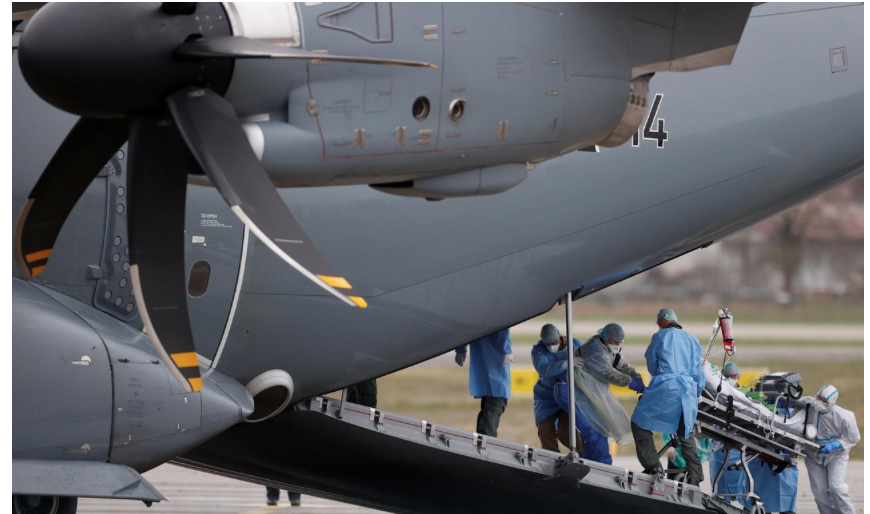 “The French and German armed forces are working together to fight against Covid-19,” the ministry said in a statement. “This cooperation shows the solidarity of the Franco-German friendship.”

Armed forces minister Florence Parly spoke March 27 to her German counterpart, Annegret Kramp-Karrenbauer, on the virus crisis and the two ministers agreed on measures to help hospitals in northeastern France, the ministry said.

That flight was part of Operation Resilience, a broad military mission seeking to lighten the load on civil authorities across France, heavily hit by the pandemic.

The army light air wing rapidly adapted the NH90 for the medical mission, which allowed evacuation of patients under intensive care, the ministry said. The NH90 also flew March 28 patients to Geneva, as Switzerland has offered assistance.

The army has adapted the NH90 to carry virus patients under intensive care. The helicopter will carry two patients under oxygen, and a crew of seven or eight. There will be a pilot and a flight commander, a flight engineer, a flight specialist in the hold, one or two doctors, and two nurses.

“Just one word: thanks,” she said.

That was the first German military flight of French patients, regional paper L’Alsace reported. The operation took just under two hours to embark the patients before flying to Stuttgart. The patients were then taken to the military hospital in Ulm, southwest Germany, AFP news agency reported, the paper said.

“France thanks Germany and Switzerland and expresses its deepest gratitude,” the ministry said. “As our countries are confronted by a major crisis, these medical evacuations embody European solidarity.”

Meanwhile, the Dixmude helicopter carrier returned March 27 to Toulon naval base, southern France, and was fitted out and crew prepared for sailing to the French Caribbean, to help civil authorities against the virus.

The warship had been in the western Mediterranean, but allied nations had cancelled cooperative exercises due to the medical crisis. The navy, however, managed to conduct a joint exercise with the Lebanese forces in a beach operation.

The latest figures show there were 35,575 virus cases in France, with 2,314 who had died in hospital, daily Le Figaro reported March 29. Those figures exclude deaths in retirement homes.

France has extended the national lock down to April 15, after the initial 15 days ordered March 17.

Germany has a relatively low mortality rate compared to other European nations, daily The Guardian has reported. That may be related to its methodology for gathering data, or may reflect high testing rates which give a more accurate assessment of the virus threat.

There were 22,364 virus cases in Germany, with only 84 reported to have died, according to John Hopkins University, The Guardian reported March 22. That gave Germany the lowest mortality rate of the 10 countries most badly hit by the pandemic.

Featured photo: A patient, infected with coronavirus disease (COVID-19), is carried on a stretcher into a German military A400M aircraft during a transfer operation from Strasbourg to Ulm in Germany, France March 29, 2020. REUTERS/Christian Hartmann