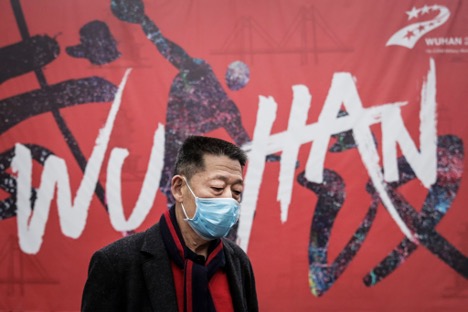 The new coronavirus, Covid-19, has spread to more than 130 countries—bringing social disruption, economic damage, sickness and death—largely because authorities in China, where it emerged, initially suppressed information about it. And yet China is now acting as if its decision not to limit exports of active pharmaceutical ingredients and medical supplies—of which it is the dominant global supplier—was a principled and generous act worthy of the world’s gratitude.

When the first clinical evidence of a deadly new virus emerged in Wuhan, Chinese authorities failed to warn the public for weeks and harassed, reprimanded and detainedthose who did. This approach is no surprise: China has a long history of shooting the messenger. Its leaders covered up severe acute respiratory syndrome, another coronavirus, for over a month after it emerged in 2002, and held the doctor who blew the whistle in military custody for 45 days. SARS ultimately affected more than 8,000 people in 26 countries.

This time around, the Chinese Communist Party’s proclivity for secrecy was reinforced by President Xi Jinping’s eagerness to be perceived as an in-control strongman, backed by a fortified CCP. But, as with the SARS epidemic, China’s leaders could keep it under wraps for only so long. Once Wuhan-linked Covid-19 cases were detected in Thailand and South Korea, they had little choice but to acknowledge the epidemic.

About two weeks after Xi rejected scientists’ recommendation to declare a state of emergency, the government announced heavy-handed containment measures, including putting millions in lockdown. But it was too late. Many thousands of Chinese were already infected with Covid-19, and the virus was rapidly spreading internationally. US National Security Adviser Robert O’Brien has said that China’s initial cover-up ‘probably cost the world community two months to respond’, exacerbating the global outbreak.

None of this would have happened China had responded quickly to evidence of the deadly new virus by warning the public and implementing containment measures. Indeed, Taiwan and Vietnam have shown the difference a proactive response can make.

Taiwan, learning from its experience with SARS, instituted preventive measures, including flight inspections, before China’s leaders had even acknowledged the outbreak. Likewise, Vietnam quickly halted flights from China and closed all schools. Both responses recognised the need for transparency, including updates on the number and location of infections, and public advisories on how to guard against Covid-19.

Thanks to their governments’ policies, both Taiwan and Vietnam—which normally receive huge numbers of travellers from China daily—have kept total cases to fewer than 60. Neighbours that were slower to implement similar measures, such as Japan and South Korea, have been hit much harder.

If any other country had triggered such a far-reaching, deadly, and above all preventable crisis, it would now be a global pariah. But China, with its tremendous economic clout, has largely escaped censure. Nonetheless, it will take considerable effort for Xi’s regime to restore its standing at home and abroad.

Perhaps that’s why China’s leaders are publicly congratulating themselves for not limiting exports of medical supplies and active ingredients used to make medicines, vitamins and vaccines. If China decided to ban such exports to the United States, the state-run news agency Xinhua recently noted, the US would be ‘plunged into a mighty sea of coronavirus’. China, the article implies, would be justified in taking such a step. It would simply be retaliating against ‘unkind’ US measures taken after Covid-19’s emergence, such as restricting entry to the US by Chinese and foreigners who had visited China. Isn’t the world lucky that China is not that petty?

Maybe so. But that is no reason to trust that China won’t be petty in the future. After all, China’s leaders have a record of halting other strategic exports (such as rare-earth minerals) to punish countries that have defied them.

Moreover, this is not the first time China has considered weaponising its dominance in global medical supplies and ingredients. Last year, Li Daokui, a prominent Chinese economist, suggested curtailing Chinese exports of active pharmaceutical ingredients to the US as a countermeasure in the trade war. ‘Once the export is reduced’, Li noted, ‘the medical systems of some developed countries will not work’.

That is no exaggeration. A US Department of Commerce study found that 97% of all antibiotics sold in the US come from China. ‘If you’re the Chinese and you want to really just destroy us’, Gary Cohn, former chief economic adviser to US President Donald Trump, observed last year, ‘just stop sending us antibiotics’.

If the spectre of China exploiting its pharmaceutical clout for strategic ends were not enough to make the world rethink its cost-cutting outsourcing decisions, the unintended disruption of global supply chains by Covid-19 should be. In fact, China has had no choice but to fall behind in producing and exporting pharmaceutical ingredients since the outbreak—a development that has constrained global supply and driven up the prices of vital medicines.

That has already forced India, the world’s leading supplier of generic drugs, to restrict its own exports of some commonly used medicines. Almost 70% of the active ingredients for medicines made in India come from China. If China’s pharmaceutical plants don’t return to full capacity soon, severe global medicine shortages will become likely.

The Covid-19 pandemic has highlighted the costs of Xi’s increasing authoritarianism. It should be a wake-up call for political and business leaders who have accepted China’s lengthening shadow over global supply chains for far too long. Only by loosening China’s grip on global supply networks—beginning with the pharmaceutical sector—can the world be kept safe from the country’s political pathologies.

Brahma Chellaney, professor of strategic studies at the New Delhi–based Centre for Policy Research and fellow at the Robert Bosch Academy in Berlin, is the author of nine books, including Asian juggernaut, Water: Asia’s new battleground and Water, peace, and war: confronting the global water crisis.

Published by ASPI on March 16, 2020. This article is presented in partnership with Project Syndicate