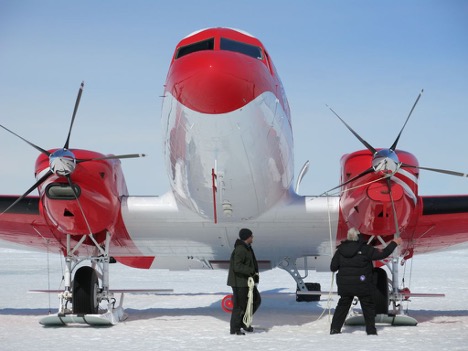 In 2013, the Tasmanian government signed a memorandum of understanding with China’s State Oceanic Administration to provide support services for Chinese Antarctic expeditions. Under the agreement, Chinese vessels were given access to Hobart’s port and provided with technical and regulatory assistance support. The Australian government and China signed a memorandum of understanding on Antarctic collaboration in 2014.

China has committed to regular visits to Hobart by its Antarctic icebreakers. The Xue Longand Xue Long 2 visited in November 2019, and the Xue Long 2 returned in March when Australia helped the Chinese team that was repairing a research vessel stranded in Antarctica.

Hobart may host China’s first nuclear-powered icebreaker, which is now being constructed. Australia transports Chinese expeditioners on intercontinental flights from Hobart to Antarctica and within Antarctica. China reciprocates with logistics and science support to Australia in Antarctica.

The logistics arrangements directly benefit the Tasmanian economy and support the Antarctic efforts of both nations.

But if China’s long-term ambitions in Antarctica aren’t congruent with ours, should we also be asking how we might adjust this relationship and our commitments to ensure Beijing supports our Antarctic interests? Antarctica is strategically important to Australia. As a claimant state to 42% of the Antarctic continent, we have vital national interests in the region and critical relationships with other countries that are active there.

That’s because a well-constructed relationship can improve the chances that Australia and China will  cooperate in a part of the world that has remained free from military conflict, and that Australia can influence China’s evolving interests in the Antarctic Treaty System.

Others are concerned that the expansion of ties with China may cost us our traditional role as a leader in Antarctic affairs.

Given the broader tensions in the China–Australia relationship, China’s global ambitions, the lack of progress on key Antarctic policy initiatives and the potential for significant geopolitical consequences for the future of Antarctica and for Australia’s strategic interests, it’s important that Australian policymakers reconsider our long-term Antarctic policy settings.

We found no clear evidence that China is violating the Antarctic Treaty, and we’re not arguing for a confrontational approach with Beijing. Indeed, Australia should continue scientific and logistic cooperation with China in Antarctica. But there’s reason to apply a more sharply focused assessment of the costs and benefits of cooperation, given China’s more assertive international posture and increasing interests in Antarctica.

Future cooperation should proceed only after a careful assessment of Australia’s interests and the impact on our wider multilateral aims. We should bring broad policy and intelligence perspectives to our Antarctic activities and relationships and assess with allies and friends China’s activities, interests, goals and intentions.

Recommendations designed to maximise the value and mitigate the risks of our Antarctic relationship with China include:

establishing a ministerial Antarctic council to assess, measure and review our Antarctic engagements, most importantly our engagement with China

conducting ongoing discussions on how China might be affecting Antarctic norms and governance, on any risks in research collaboration, and on areas in which our engagement might be more focused

placing Antarctica back on the agenda for the Australia-China High-Level Dialogue, from which it was dropped

adopting a more tailored and transactional approach in our Antarctic engagement with China, making clear what we expect from China

increasing our cooperation with the US on Antarctic affairs; for example, Antarctica could be a topic for consideration at the next AUSMIN meeting

increasing our Antarctic engagement with Asia to avoid problems arising from over-reliance on bilateral cooperation with China. Australia has strong scientific collaboration with South Korea and Japan, and India is keen to strengthen its Antarctic connections with Australia

promoting Hobart’s role as a science and logistics gateway to Antarctica to South Korea, Japan and India. That diversification will reduce Tasmania’s economic reliance on Chin

examining how technology such as civilian satellites could enhance inspection and transparency; for example, experts from the Defence Science and Technology Group, in civilian roles, should be more involved in an enhanced inspections regime

Stagnant and, in some areas, diminishing funding for science (as opposed to logistics and infrastructure) has opened the way for China to invest in Antarctic research by Australian institutions. We run the risk of being mendicants living on Chinese research funds. Modest Australian reinvestment will diminish that risk and increase our leverage as we engage with China on Antarctic research.

As a guiding principle, applying the Hippocratic oath, ‘First, do no harm’, to our Antarctic and overall national interests would help manage Australia–China Antarctic relations.

For example, we should not help China to use Antarctic research for resource exploitation, to gather information on advanced technology with clear potential for military purposes, or to damage the environment.

Given Beijing’s tendency to move quickly on a broad front, as it has done in the South China Sea, we need to be prepared to respond to a rapid increase in the speed and scale of China’s activity in Antarctica.

To ensure that our engagement with China on Antarctic affairs proceeds in line with our national interests, we should pursue an approach that’s clear, cogently communicated, credible, comprehensive and consistent. This must be informed by a broad appreciation of the cumulative effect of China’s actions, policy and presence on the continent.

Anthony Bergin is a senior fellow at ASPI. Tony Press is an adjunct professor at the Institute for Marine and Antarctic Studies at the University of Tasmania.