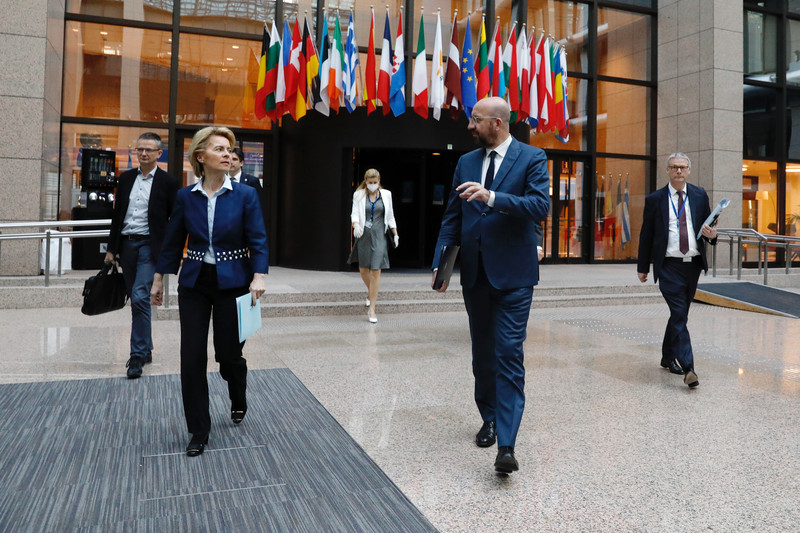 One should note, that the money is to be generated by going to the market and generating long term loans.

“The commission said that repaying the borrowed money would begin under the next-next EU budget after 2027, and last until 2058 “at least”, seeking the maximum maturity of 30 years on the loans. It argues they could be refinanced with a combination of new own resources, such as the digital tax, or carbon border tax, taxes on large companies, if governments agree to them, without new money from EU countries.”

And the recovery plan would pay out money to nations as they complied with EU objectives.

“For member states to access the €560bn through the new, so-called Recovery and Resilience Facility, countries will need to draw up reform programmes in line with the EU priorities of digitalisation and greening the economy.

“The commission will then assess these programmes and other member states can have a say too. Once the programs are approved, money can be distributed. The new money will come with conditions attached.

“The national programs need to follow the commission’s economic advice on deficit and debt.”

These quotes are taken from a May 28, 2020 article published by EUObserver.

A underlying challenge facing Europe as a Union has been the significant North-South divide and the question of the German role in managing the divide.

This challenge has clearly accentuated with the impact of COVID-19.

In a policy brief by Christian Odendahl and John Springford published on May 21, 2020 by the London-based Centre for European Reform, the authors analyze this impact.

COVID-19 is not a ‘symmetric’ shock to Europe’s economy.

The economic costs of lockdowns, and the continued social distancing measures that follow them, will be different across countries and regions.

And some governments are better able to offset the costs of these measures than others – and to stimulate their economies once the virus is under control.

We identify three ways in which COVID-19 will be a force for divergence.

First, lockdowns in countries with larger outbreaks will last longer.

France, Italy, Spain, and the UK have had the worst outbreaks in Europe. Most countries in Europe have imposed comparably stringent lockdowns – and for each month that they go on, around 3 per cent of annual GDP is lost. But lockdowns will continue until the number of infections has fallen to a low level. Our simulations suggest that this will take many weeks longer for France, Italy, Spain and the UK than it will for Austria, Germany and Poland.

Second, through a new analysis of the impact of lockdowns on Europe’s regions, we show that regions in Southern Europe are likely to suffer larger and more long-lasting recessions than those in the north and east.

The manufacturing and tourism sectors are hardest hit by lockdown measures, and tourism will remain limited even when lockdowns are lifted.

Finally, Southern European governments are less able to offset the costs of COVID-19, and their higher debt levels will weigh on the recovery. We show that consumer confidence has been hit hardest in countries that have enacted less stimulus.

And higher debt-to-GDP ratios will probably result in higher borrowing costs for governments. Consequently, with more tax and business revenues being used to finance debt, there will be less capacity for investment. Unless the EU’s fiscal rules are reformed, they will also require Southern Europe’s governments to rapidly cut debt, which will reduce growth over the medium term.

Further economic divergence is bad in and of itself.

But it will also make European politics even more fractious.

Slow growth in some regions provides fertile ground for the far right and left, and undermines the appeal of the EU as a ‘convergence machine’.

During the initial months of the COVID-19 crisis the EU’s richer countries balked at large outright transfers to the worst-affected countries.

Now, the Franco-German proposal for a €500 billion ‘recovery fund’ has the potential to forestall further divergence, if sceptical countries in Northern and Central Europe can be persuaded to accept significant transfers to Southern Europe.

Agreeing the details of the fund will be hard, and the sceptics may demand more money from the EU budget in order to sign up.

The EU’s fiscal rules are too rigid, and mandate the reduction of debt even when economies are weak. Now is the time to reform them: the aim should be to stabilise debt levels once the pandemic is over, and to let growth reduce debt over time.

EU Commission president Ursula von der Leyen and EU council president Charles Michel are seen in the featured photo which is credited to the Council of the European Union).