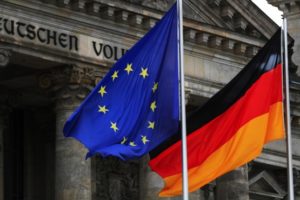 The German presidency of the Council of the EU comes at a critical point in time for the European Union.

The unity of this “community of values” has been repeatedly tested but potentially the greatest test has come more recently in the form of a global pandemic.

The Presidency of the Council is a rotating presidency that changes every six months. As president of the council, the member state must “ensure the continuity of the EU’s work in the Council.” 1 The presidency works as a trio, with a single member spearheading for six months at a time, in a total of an 18 month presidency: the current trio is Germany, Portugal and Slovenia.

The current presidency, Germany, is using the motto “Together for Europe’s recovery” as its fundamental message driving its agenda.

The biggest success that Germany has been able to claim under its presidency thus far is the successful approval of the Corona virus recovery package, an “agreed €750bn recovery package and the €1.074 trillion seven-year budget.”2 Chancellor Merkel was quoted claiming the deal was “a very good message” meaning that “this very special construct of 27 member states of very different backgrounds can work together”, “Europe has shown it is able to break new ground.”3

Aside from overcoming the pandemic and recovering financially, what are the other priorities Germany wants to address during their six-month time “in office”?

The following are the “guiding principles” outlined by the Programme of the German Presidency:

Aside from the economic aspect of recovery, for which European Commission President Ursula Von  der Leyen thanked Chancellor Merkel in “steering negotiations towards a European solution,” Germany has also emphasized the need to build on the EU’s crisis management responses so that future challenges may be responded with more unity and cohesiveness.4 Among the efforts initiated is an EU wide database as well as developing an early warning system that would be accessible to all member states.

The second “pillar” to the guiding principles is a more innovative Europe.

While this claim is quite vague, Germany has a very strict vision for what a strong Europe entails: digital sovereignty among the member states being one of their biggest concerns. German priority lies in allowing for the European single market, the largest single market in the world, to modernize and adapt itself to an increasingly digitized world. These efforts range from policy regarding consumer protection to protection of intellectual property within the market.

The pillar labeled as a “Europe of Security and Common values” addresses the issue that has paralyzed European politics since 2015, the migration crisis. Germany is calling on an “ambitious reform of the Common European Asylum System.”5

While the Presidency is relying on common “European” values to uphold this, it is important that Brussels as a whole reforms the asylum system with reality in mind. It should not seek to attempt a reform that is overly ambitious or one that would sacrifice member states’ national interests.

Brussels must remind itself there is no such thing as a single European “culture” as it is not a common state but rather an entity. EU bureaucracy must respect the wishes of the individual member states- especially with something as delicate as immigration law.

While it is important to recognize the very real need to address the migration crisis, it must be done so in a realistic fashion with the lens of what additional challenges 2020 has brought onto national governments.

The final pillar, a “strong Europe in the world” speaks to the will of Brussels to build its geopolitical presence. Among priorities here are building a cohesive, united strategy towards China, promoting and developing the European-African agenda and opening up the door for further enlargement for the countries in the Western Balkans.

The timing of the German presidency is an appropriate one.

With Germany having the strongest economy in Europe it may be well placed in managing the economic repercussions of the pandemic.

Both Macron and Merkel spearheaded efforts that southern European countries (those most impacted by COVID-19) would receive the bulk of the aid. This was accomplished even with push back from many in the north that felt this to be too generous in a post Eurozone crisis world.

Some “northern nations wanted a smaller rescue package with tighter conditions” but an agreement was reached- with Italy receiving “the largest share of the stimulus money” and “Spain receiving the second largest.”6

This emphasis on aiding the southern, most economically affected countries is a smart one from the Chancellor as it limits their ability to turn to alternative sources of funding.

One can turn to the recent past to see what this entails. In 2012, China’s state grid bought a 25% holding in REN (which runs Portugal’s electricity grid, in order for Portugal’s debt to be forgiven after the Eurozone crisis.7

Many also claim that Chancellor Merkel, with her decision to not run for re-election in 2021, is in a “good place” for being in charge of the Presidency. Her decisions with regard to EU policy will not be as heavily weighed against what the implications for her electoral base back home might be.

The challenge to this presidency (Germany as well as Portugal and Slovenia) is that it may be “distracted” by the COVID-19 crisis to not recall the laundry list of grievances that has, unfortunately, not gone away: the increasing presence of China, Russian interference in electoral processes and media, Poland and Hungary’s lack of respect for rule of law or “European values”, a Turkish overstep in Libya, the reality of enlargement fatigue—the list goes on.

Germany is right to emphasize that Europe must come together to rebuild, this is an interesting time to shape what Europe will resemble going forward.

Crisis is not a foreign concept to the European Union, and it has the necessary tools at its disposal to remain resilient to these obstacles.

It must provide these tools in order to avoid member states from turning to alternative sources in order to rebuild.