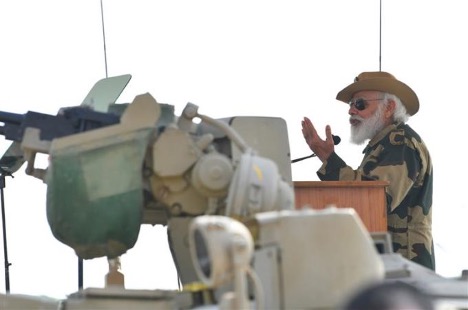 New Delhi. Prime Minister Narendra Modi has warned India’s neighbours of a “fierce answer” if the country’s policy of “understanding and explaining” is tested, a clear response to the tensions along the LAC in Eastern Ladakh caused by the incursions by the PLA and along the LOC, where there has been repeated shelling by Pakistani forces.

Prime Minister Narendra Modi during his visit to Longewala on November 14.

“Today, India’s strategy is clear. Today’s India believes in the policy of understanding and explaining, but if anybody tries to judge our capabilities, we equally give a fierce answer,” the Prime Minister said on November 14 in his address to the armed forces at Longewala in Rajasthan’s Thar desert, the site of a fierce battle during the 1971 Indo-Pak war.

“Your austerity and the sacrifice at the border create trust in the country. Your determination strengthens the belief that any big challenge can be overcome together,” the Prime Minister said, adding: “Be it the highlands of the Himalayas, the expanse of the desert, the dense forest or the depth of the sea, your valour is always heavy on every challenge.”

Wearing a combat jacket and sporting a BSF cap, Modi also rode a tank at Longewala.

The Chief of Defence Staff, General Bipin Rawat, the IndianArmy Chief, General M.M. Naravane, and the Border Security Force (BSF) Director General, Rakesh Asthana, accompanied the Prime Minister at the border during his visit to celebrate Diwali with the armed forces, a tradition he has maintained since assuming office in 2014.

He distributed sweets and listened to the problems of the soldiers during his visit to Jaisalmer later in the day.

In his address in Jaisalmer, he said the strength of India’s armed forces “is such that whenever someone takes a crooked eye towards us, you have the courage to answer him in the same language. These are the things that make India’s army more reliable in the eyes of the world”.

Today, Indian forces are exercising “with big countries of the world. We are having strategic partnerships against terror. Indian armies have shown that they can strike anytime, anywhere on terror targets. It is also the Indian military that leads peacekeeping missions in every corner of the world”, Modi said.

Noting that the greatest impediments in the modernization of the army and in the self-sufficiency of military equipment have been old-fashioned processes, Modi said: “Continuous work is also being done for simplification of these processes. Recently some more major improvements have been made. As before, the process of trial and testing was very complex. They used to spend a lot of time also. 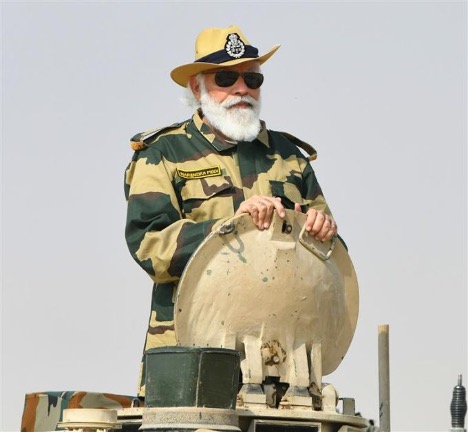 “This caused a lot of delay in the induction of equipment in the defense sector. Now it has been made very simple. The coordination of the Chief of Defense Staff is in front of us to ensure that the coordination between our three armies increases, faster decisions are taken.

The Prime Minister had visited Jammu and Kashmir’s Rajouri district in 2019 to celebrate Diwali with the soldiers guarding the Line of Control (LoC). He visited border positions in Uttarakhand in 2018 and the Gurez sector of north Kashmir in 2017.

This article was published by India Strategic on November 15, 2020.