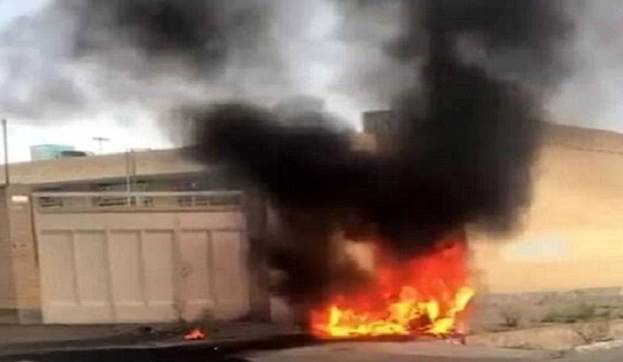 Iran International TV has reported that a research drone belonging to Iran Aircraft Manufacturing Industrial Company (HESA), a subset of Iran’s Ministry of Defence and Armed Force Logistics (MODAFL) crashed this week in Shahinshahr Province due to a technical error.

It is reported that there were no injuries, and Nasser Hosseini Manjezi, the deputy governor of Shahinshahr confirmed the crash of the drone and said: “This drone crashed due to a technical defect in the clock system, but fortunately did not cause any casualties.”

The research drone’s crash offers an insight into Iran’s military ambitions and its growing drone industry, as HESA continues to develop unmanned aerial vehicles (UAV) for surveillance and possible attack.

Defence expert and analyst at Iran International TV, Jason Brodsky said: “The threat to regional stability from Iran’s growing drone industry is significant. For instance, in January, reports circulated that Iran had sent advanced suicide drones to its Houthi allies.”

Brodsky added: “Given this influx of Iranian technology, Israel is eyeing Yemen as an emerging threat, and it recently transferred Iron Dome and Patriot missile defence batteries to Eilat for this reason.”

Established in 1976, HESA belongs to the Iran Aviation Industries Organization (IAIO) and is located at Shahinshahr, Isfahan.

In 2008 the US Department of the Treasury designated six Iranian military firms that are owned or controlled by entities previously designated for their roles in Iran’s nuclear and ballistic missile programs, including Iran’s Ministry of Defense and Armed Forces Logistics (MODAFL) and Iran Aircraft Manufacturing Industrial Company (HESA), pursuant to Executive Order 13382.

HESA was designated because it is owned or controlled by the Ministry of Defence and Armed Forces Logistics (MODAFL), and because it has provided support to the Iranian Revolutionary Guard Corps (IRGC).

In 2019, the US Government designated the Islamic Revolutionary Guards Corps as a foreign terrorist organisation (FTO) under Section 219 of the Immigration and Nationality Act, making the first time that the United States has designated an arm of another government, rather than a non-state actor, as an FTO.

HESA conducts research on, development of, production of, and flight operations for unmanned aerial vehicles (UAVs) in Iran, and produces different variants of the Ababil UAV, which can be used for surveillance and attack by the IRGC.

Commenting on HESA, Jason Brodsky said: “HESA has long been on the radar of U.S. officials. It is owned or controlled by Iran’s Ministry of Defense and Armed Forces Logistics (MODAFL) and has provided support to the Islamic Revolutionary Guard Corps (IRGC).”

“The research drone crashing tells us that Iran continues to develop its drone technology. With the expiration of the UN arms embargo in October 2020 under U.N. Security Council Resolution 2231, Tehran will be emboldened to export its drone technology abroad. It may also take advantage of partnerships with China and Russia to acquire more advanced technology.”

Featured Photo: An image of the crash site, where the research drone landed.

Jason Brodsky is Middle East Analyst and Editor of Iran International TV. He was previously the policy director of United Against Nuclear Iran (UANI). From 2013-16, he served in a variety of capacities at the Wilson Center, including as special assistant to the Director, President and CEO former Congresswoman Jane Harman; as a research associate in its Middle East Program; and as special advisor to Distinguished Fellow Aaron David Miller. Earlier in his career, Jason served as a fellow at the White House in the Executive Office of the President. His research specialties include Iran, Iraq, Shiite militias, and U.S. policy in the Middle East.