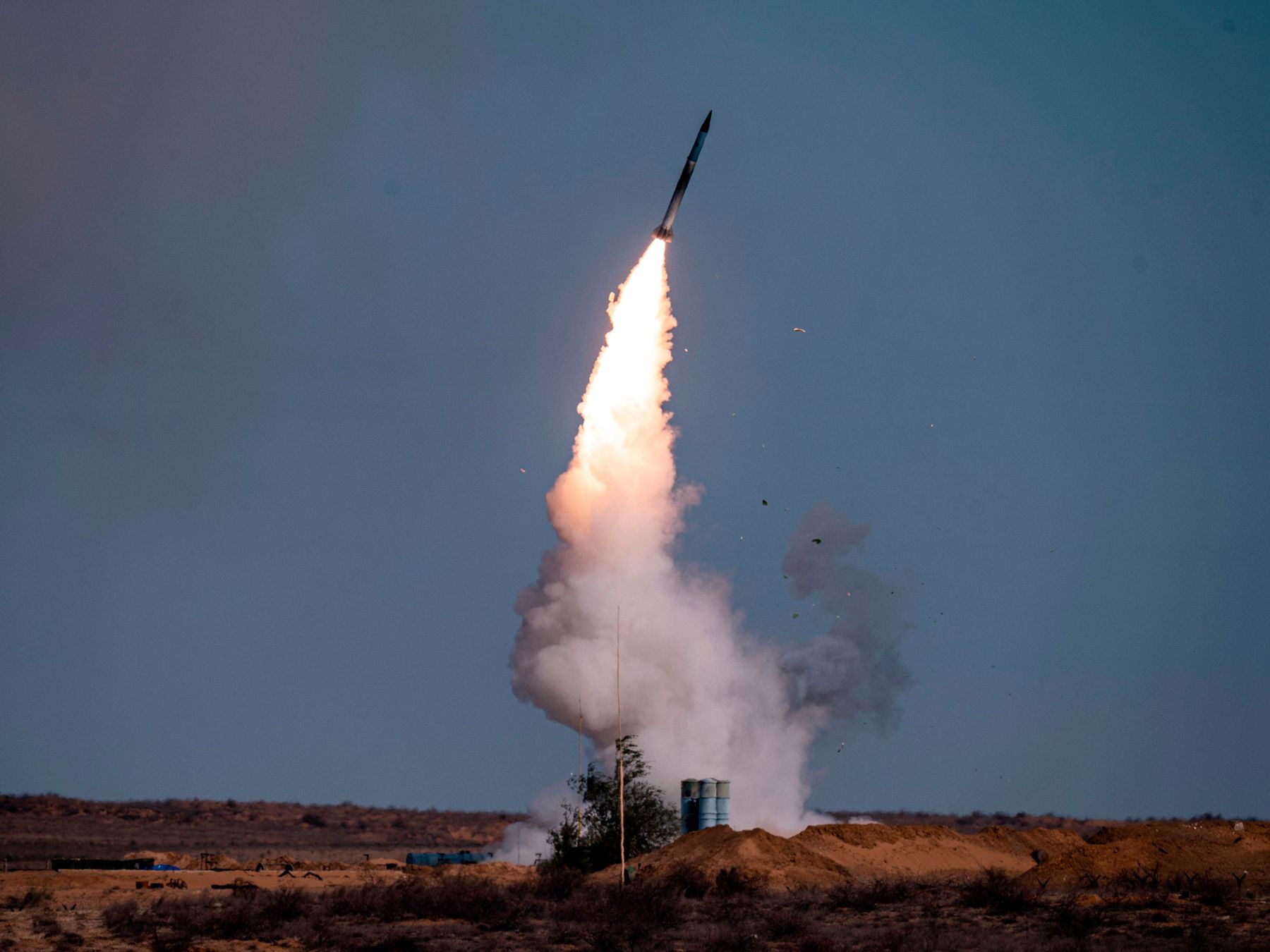 The S-400 Triumf is an air defense missile system that can engage “aircraft, unmanned aerial vehicles (UAV), and ballistic and cruise missiles, within the range of 400km at an altitude of up to 30km. The system can simultaneously engage 36 targets.” It is in service in Russia, has been sold to Belarus, China, Turkey, and Algeria, and deployed to Syria.

The S-400 was in the news when the U.S. sanctioned NATO ally Turkey for buying the system. Starting in 2009, the U.S. and Turkey made several attempts to negotiate the sale of the competing Patriot air defense system, but in 2017 Turkey bought the S-400 instead. The Russian effort was no doubt helped by Putin’s support of Turkish president Recep Tayyip Erdoğan after the attempted coup in 2016, while the Americans remained silent.

The U.S. warned Turkey that buying the S-400 would trigger sanctions but Turkey activated the system and, in December 2020, the U.S. sanctioned Turkey’s Presidency of Defense Industries, its president, and other top officers. Previously in response to the S-400 purchase, the U.S. expelled Turkey from the F-35 combat aircraft program, and terminated F-35 contracts with Turkish defense firms.

India also bought the S-400 and was warned that this could trigger sanctions. (The system will be delivered in late 2021.)

The warning comes as the U.S. wants India to help contain China as part of the “Quad” – the coalition of the U.S., Japan, Australia, and India. But India is also a longtime customer of Soviet and Russian equipment, and manufactures many Russian weapons under license. The U.S. wants India to shift from relying on Moscow to relying on Washington but India, in line with its heritage in the Non-Aligned Movement, probably prefers to rely on itself.

The U.S. has sold India arms, such as the AH-64 attack helicopter and Hellfire missiles, but Russia is India’s largest supplier. The U.S. has never sold India the biggest-ticket item, fixed-wing combat aircraft, though the Trump administration offered the F/A-18 fighter.

The interests of the U.S. are colliding with the desires of Turkey and India to reduce their dependence on the U.S. and Russia and become self-sufficient in arms production. They can develop their technology sector, become arms exporters, gain revenue, and turn sales into political influence à la America.

Also, Turkey and India want to reduce U.S. interference in their internal affairs and one solution is to buy from Russia, which only wants to discuss the payment schedule.

The U.S. is also concerned that if India and Turkey field American and Russian gear it will make the idea of the “mixed fleet” attractive and countries may spread purchases among Russia, China, Europe, and the U.S. The U.S. has reasonable concerns regarding equipment interoperability to facilitate joint operations, and the presence of Russian or Chinese trainers and technicians near U.S. equipment will present a challenge to secure U.S. technology.

Another U.S concern is preserving high levels of arms sales, especially if the Biden administration reduces the defense budget to help deal with the national debt and deficit. The U.S. is the world’s leading arms exporter with a 37% market share and those sales are not just political leverage: they keep production lines running, reducing the cost of complete weapon systems and spare parts.

The U.S. will have to be creative as it tries to resolve conflicts with a NATO ally, and a country of 1.4 billion people that is skeptical of U.S. intentions.

The U.S. has cordial relations with India, which feels that a country of its size and with a surging technology sector should not be beholden to any supplier – American or Russian. India may be ready to be a member of the Quad, but may not want to sacrifice a decades-long relationship with Russia while it helps the U.S. in its competition with China, a policy you can describe as “the plumber pays you.”

On Turkey, compromise is needed. America’s political class hates Erdoğan, but if he vanishes tomorrow his successor is no more likely to surrender to the U.S. on the S-400. Turkey has received loans from China for the energy and transportation sector, and from the China-backed Asian Infrastructure Investment Bank for COVID-19 relief, but it also lives at the crossroads of Europe, the Middle East, Central Asia, and the energy-rich eastern Mediterranean Sea. Turkey may not be too big to fail, but relations between Washington and Ankara must be stabilized to pull Turkey away from Russia and China.

One solution may be a technical security team similar to what the U.S. uses to monitor Pakistan’s U.S.-provided F-16 fighters to ensure the technology is secure, and that the aircraft is used as intended and isn’t modified.  A similar team in Turkey could be used to ensure the F-35’s technology isn’t compromised by the S-400.

This week U.S. Secretary of State Antony Blinken said, “The United States won’t force our allies into an ‘us-or-them’ choice with China.” But will that indulgence extend to the lucrative defense contracting sector if a customer decides to buy equipment from Russia or China?

And the sanctions against Turkey may help competitor China score a significant arms sale to Pakistan, according to a Turkish government spokesman. The official claims the U.S. “blocked” the export of engines for the T-129 ATAK helicopter which may tip the sale in favor of China’s Z-10 attack helicopter. There may be more to it than that but it won’t matter if it gets retweeted often enough.

The politics will be more complicated in Washington, D.C. than in Ankara or New Delhi as the center of gravity for compromise is the sanctions-loving U.S. Congress. Congress will be reluctant to surrender its favorite foreign policy which will give Russia the opportunity to argue that U.S. sanctions are merely meant to promote U.S. business, and the U.S. has once again proved it has no respect for its purported allies.

Even if Moscow never sells another S-400 system the missile may still find its mark.