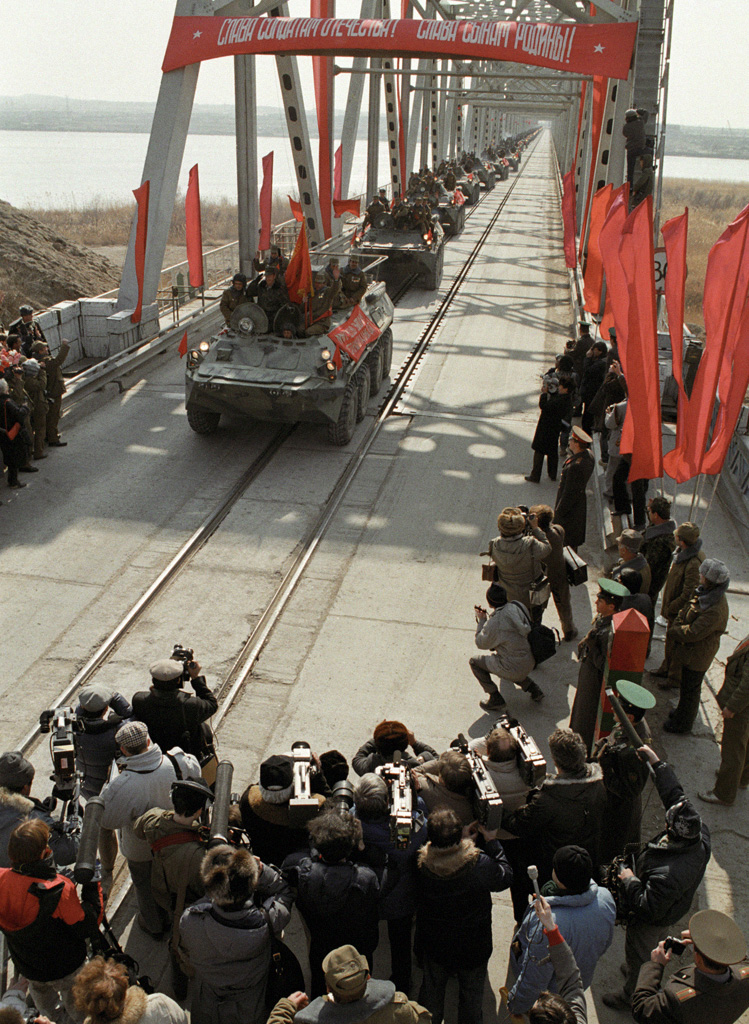 Thirty two years ago, January 30, 1989, ten American diplomats and U.S. Marine Security Guards, including I, the US Charge d’Affaires, departed Kabul as 120 thousand Soviet troops evacuated the country across its northern border. We were ordered out by the incoming Bush Administration for fear that we would be massacred in error by mujahidin rebels expected to storm the Afghan capital after Soviet departure.

Sharing the belief that the fall of the Soviet-backed Afghan regime of Najibullah was imminent, I told the New Delhi press that the Afghan quasi-Communists would collapse in six months. This, however, did not occur for three years until mujahidin forces took the capital in 1992, decisively empowered by the collapse of the Soviet Union, its military and food supply chain, and its financial support of the client regime.

Najibullah, a brutal former Secret Police director, fled to the UN compound from whence he was extracted and hung in 1996 by Taliban forces mobilized by Pakistan to end the chaos of mujahidin coalition rule.

The expected and genuine outcome of the Soviet evacuation is relevant now as we cope with the debacle of US evacuation and withdrawal.

The Soviets and their Afghan partners took extreme measures in the last days of large-scale Russian presence to buttress their respective post-withdrawal positions vis-à-vis the mujahidin resistance, neighboring Pakistan, and, most importantly, each other.

Measures that the Soviets and their clients undertook will not, and cannot, be repeated now, nor could any post-withdrawal arrangement that might eventually ensue be undone by the collapse of the United States, as occurred with the Soviet Union.

Yet, it is worthwhile to recapitulate the extraordinary effort the Russians and their Kabul allies put into guaranteeing their post-withdrawal equities. As we contemplate new and more modest U.S. involvement in Afghanistan in the future, we might want to consider whether we will achieve better results than the aggressive Soviets, notwithstanding the greater resilience of our polity.

Indeed, Soviet Ambassador in Kabul Nikolay Yegorychev, former First Secretary of the Moscow Communist Party, told me a few weeks earlier that some “Pakistani patriot” would likely shoot down a U.S. resupply flight into the neighboring country unless the US stopped its provision of Stinger anti-aircraft missiles to the mujahidin.

But only hours after the crash, Ambassador Yegorychev called on me–in his one and only visit to the U.S. Embassy —to claim that the Soviet Union had nothing to do with the Zia crash. When reminded about his Stinger statement and questioned about Afghan regime involvement, Yegorychev said he could say nothing about the Afghans, implying by failure to deny that the Najibullah government may have been responsible.

Even if this were the case, the embedded Soviet presence in the Afghan intelligence apparat made Russian complicity at some level an inescapable assumption. Whoever had the lead, red and green tracer fire arced across the sky that night as interested parties in Kabul celebrated the demise of their arch-enemy Zia ul Haq.

On November 2, 1988, returning from a diplomatic lunch to the U.S. Embassy, I encountered a large trailer truck carrying what appeared to be a ballistic missile. Judging from its dimensions, it was clear that this was something much bigger than a FROG tactical missile.

Shortly, thereafter, overhead imagery confirmed that the Soviets had deployed SCUD medium-range missiles to Kabul and began firing them with immense roars against putative mujahidin concentrations in the direction of Pakistan.

This was clearly a warning to Pakistan to stand back as the Russians departed.

During these months, there were also reports that the Soviets were upgrading their bombing volume at selected points in Afghanistan, using for the first-time Tu22 Blinder/Backfire medium bombers.

On one occasion, a member of our Afghan national Embassy staff went to the approaches of the Salang Tunnel, a chokepoint on the resupply road from the Soviet Union, and found widespread areas containing many dead civilians–suggesting that these bombers may have been delivering wide-area, fuel air explosives to maximize indiscriminate kill.

Again, the message was: do not obstruct the regime lifeline or there will be hell to pay.

While these military measures were being applied, a new Soviet Ambassador, Yuliy Vorontsov, formerly deputy to Ambassador Anatoliy Dobrynin in Washington, was dispatched to Kabul. Vorontsov proclaimed to the press that Soviet troop withdrawal was not a certainty and was dependent on the creation of political conditions that would guarantee stability according to the Soviet vision.

It was surely hoped that the U.S. and Pakistanis would deliver a political arrangement that would favor Moscow’s post-withdrawal permanent influence

What confounded the Soviet plan was that the US Embassy, through the development of widespread contact and other efforts, knew with certainty that Soviet withdrawal preparations were proceeding, notwithstanding Vorontsov’s posturing.  Additionally, the Ambassadors of the Soviet Warsaw Pact allies, all nominally Communists but admiring American ideals, briefed me in detail on Soviet plans as soon as they were told by the Russians–often before they reported to their own capitals.

Later, when Yuliy Vorontsov returned to Washington as Russian Federation Ambassador, he told me that the Soviets had also tried to reach a political deal with elements of the mujahidin to guarantee Russian interests.

Vorontsov said he had arranged a meeting with Afghan Tajik resistance leader Ahmed Shah Massoud (assassinated by an al Qaeda suicide bomber in 2001) but the meeting did not take place because its site was bombed by Najibullah’s Afghan Air Force, fearing a Russian sellout.

The Soviets tried but could not achieve a favorable political accommodation.

This meander through the history of the Russian withdrawal leads to the conclusion that, notwithstanding willingness to undertake extreme military and political moves, the Afghan problem evaded facile solutions by the Soviets and Najibullah regime.

When I lived in Kabul, I walked through the city for hours unguarded and alone every weekend without weapons, body armor or rescue capability—no protection needed. My street conversations in Dari and Russian were tolerated by the Soviets and their clients. But there was an additional element.

During these walks, I sometimes heard praise for President Reagan even from Afghan Communist soldiers. This impunity for US personnel and latent support, even among our enemies, was possible because the US was perceived as aligned with Afghan national values. The Soviets were the hated outside infidels that America was helping to expel.

Regrettably we assumed the Soviets’ mantle with our focus on train and equip and counterinsurgency over the last twenty years.

Dr. Jon Glassman is a consultant on defense and strategic matters residing in Washington, DC.

Dr. Glassman holds a MA, Certificate of the Russian Institute, and PhD from Columbia University in Public Law and Government. He is the author of Arms for the Arabs: The Soviet Union and War in the Middle East published by Johns Hopkins University Press, was the Department of State Chair at the Industrial College of the Armed Forces, and served as faculty adjunct/Council on Foreign Relations International Affairs Fellow at the Harvard Program on Science and International Affairs.

A career diplomat, Dr. Glassman worked at American Embassies in Madrid, Moscow, Havana, Mexico City, Kabul, and Asuncion (Paraguay). He was Charge d’Affaires (Chief of Mission) in Afghanistan during the final two years of the Russian presence and was the US Ambassador in the first three years of Paraguay’s transition out of military rule.

In Washington, Dr. Glassman served in the White House as Deputy National Security Advisor and Assistant to the Vice President, Senior Member of the Secretary of State’s Policy Planning Staff (for East Asia and Latin America), Senior Advisor of the President’s Special Representative for Central American Negotiations, and Director of Australia and New Zealand Affairs.

Dr. Glassman also served in the US Arms Control and Disarmament Agency, was Special Assistant to the Secretary of State’s Advisor on Soviet Affairs, and participated in multiple US-Russian arms control negotiations.

After retirement from the State Department, Dr. Glassman served from 1998 to 2013 as Vice President for International Business Development and Director for Government Policy for the Electronic Systems sector ($7.5 billion annual revenue) of the Northrop Grumman Corporation. This business unit produces radar, electro-optical, and command-and-control systems.

Dr. Glassman was also an earlier contributor to  Second Line of Defence and who. saw from the outset the value of an independent team working assessments of the evolution of the military and of global developments.

The featured photo is from the following source: