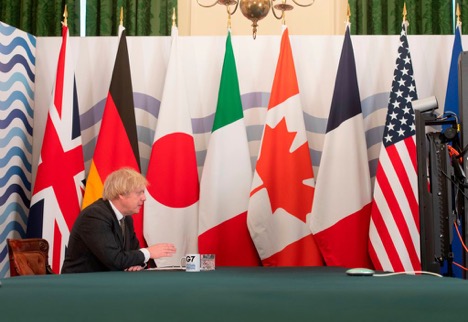 In 1966, British Prime Minister Harold Wilson wrote to his Australian counterpart Harold Holt to explain that Britain would wind back its military deployments in the Asia–Pacific, reducing its presence ‘east of Suez’. Wilson told Holt that the cost of these deployments had become ‘a burden which we cannot afford’ and ‘out of scale’ with Britain’s new, Europe-centred foreign policy.

Five decades later, Prime Minister Boris Johnson appears to have overturned this east-of-Suez posture by entering into the new AUKUS defence pact. In so doing, he has committed to the firmest initiative yet to cement his post-Brexit vision of a ‘Global Britain’.

However, the full details of the trilateral agreement remain unclear. Whether AUKUS really ends up returning Britain to the Asia–Pacific (or Indo-Pacific, in the current parlance) will be the biggest indicator yet of whether Global Britain is a real objective or merely a rhetorical placebo to soothe angst over Britain’s post-Brexit future.

So far, the most tangible initiatives towards Global Britain have been altering foreign aid commitments, contributing to international Covid-19 vaccination efforts, and restructuring the UK’s foreign office. The most coherent articulation of Global Britain came in March in the form of the government’s integrated review of defence, development and foreign policy.

However, the true military dimension of Global Britain has thus far been ambiguous. Care has been taken to ensure the Global Britain program isn’t seen as a plan to project power against a bellicose China. Rather, it has been presented to the world as a plan for a British international role less buttressed by the European Union. The AUKUS commitment, however, will now leave little doubt that Johnson’s vision of a Global Britain also comprises strategic posturing against Chinese aggression in the Indo-Pacific.

The headline announcement of AUKUS is the exchange of technological knowledge to ensure Australia can acquire nuclear-powered submarines. It will ostensibly facilitate greater information sharing for other critical technologies as well, such as artificial intelligence, cyber capabilities and quantum computing. Yet what exactly that additional sharing of information will look like remains unexplained. It’s not even clear if AUKUS will be supported by a formal treaty.

Australia, the UK and the US already have an incredibly close partnership, with the Five Eyes grouping providing unmatched access to each other’s military and intelligence secrets. They also already have mutual access to one another’s training grounds, space platforms and research programs and are constantly jointly developing new capabilities.

So, beyond submarine technology, which arguably could have been shared previously, what exactly does Britain achieve by entering into the AUKUS pact?

The optics of committing to a new trilateral agreement doubtless send a powerful diplomatic signal to China, Indo-Pacific countries and Britain’s partners about the importance of the region’s security to Britain’s foreign policy. Yet, more will be needed to ensure AUKUS is not just a high-production exercise in diplomatic theatre.

For Johnson to convince the UK’s allies and partners—as well as China—that AUKUS really is a concrete pillar of his Global Britain vision, the UK will soon need to establish a more fixed presence in the Indo-Pacific under the auspices of AUKUS. That could include basing British nuclear submarines in Australia or embedding more of Britain’s own forces in the region akin to the American’s deployment of marines to Darwin.

China will probably move swiftly to test the resolve of AUKUS, hoping to prove that it is no more than a paper tiger by forcing at least one of the three countries to lose face and limit its commitment. Such a test could come in the form of economic sanctions, cyber warfare, or even military manoeuvres.

As the one AUKUS partner not resident in the Indo-Pacific region, the UK is the obvious candidate for a first challenge to the partnership. Should it falter in practically reinforcing its rhetorical support for AUKUS, the credibility of the UK’s Global Britain agenda will also be at stake.

In response to Britain’s 1960s proposal of withdrawing from east of Suez, Holt implored Wilson to reconsider, arguing that the ‘strength, stability and peaceful progress’ of the region needed the ‘moral, material and even military help’ of the United Kingdom. To not provide this assistance, Holt wrote, would be ‘an error which history would condemn’.

However, the cost of a UK military presence in the region proved too great for Wilson and his decision arguably marked the end of the last semblances of the British Empire—the previous ‘global’ Britain. Johnson must now similarly decide whether the UK will carry the cost of upholding peace in the Indo-Pacific.

This time around it may be a far greater burden.

William A. Stoltz is senior adviser for public policy at the National Security College at the Australian National University.

This article was published by ASPI on September 17, 2021.