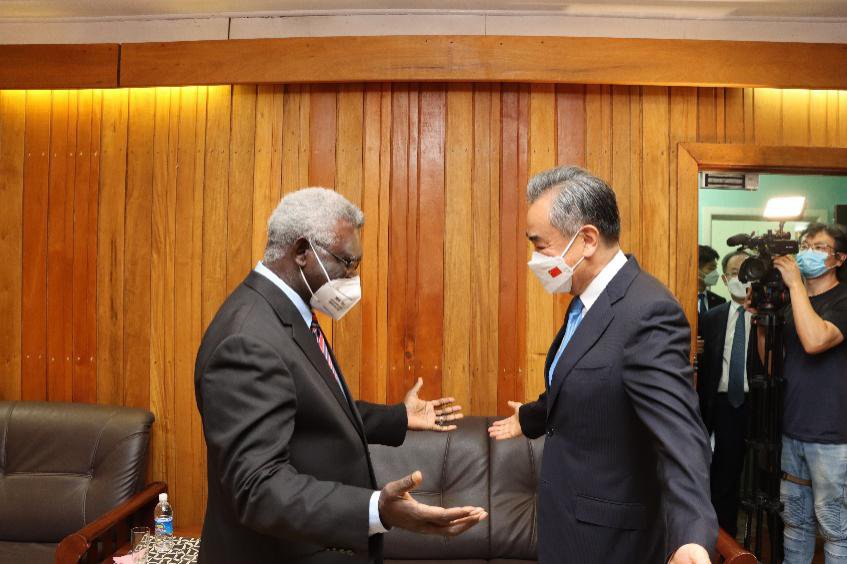 The first stop of Chinese Foreign Minister Wang Yi’s recent Pacific trip was Solomon Islands, where journalists have been complaining about their treatment since the government swapped diplomatic allegiance to Beijing from Taipei in 2019. Media freedom has deteriorated, and journalists say leaders are now taking their cues from China.

Two of the country’s most senior journalists, Dorothy Wickham and Georgina Kekea, both board members of the Media Association of Solomon Islands, called for a boycott of the official press event when it became clear that only two questions would be allowed—one from a Chinese journalist and one from a Solomon Islands journalist.

Wickham said journalists protested against the limit because it meant they couldn’t get the information they needed to do their job to inform the people.

The Chinese delegation’s fourth stop was Fiji, where journalists are often subjected to intimidation and even imprisonment when they are overly critical of the government. The 2022 World Press Freedom Index labelled Fiji as the worst nation in the Pacific for journalists and placed it at 102nd position out of 180 countries.

Local freelance journalist Lice Movono said there was a lot of secrecy from the very beginning of the visit and heavy security with no access to the Chinese delegation.

‘To be a journalist in Fiji is to be worried about imprisonment all the time. Journalism is criminalised. You can be jailed or the company you work for can be fined a crippling amount that can shut down the operation … But to see foreign nationals pushing you back in your own country, that was a different level,’ she said.

Movono said she had never experienced anything like the treatment from the Chinese officials and described it as being treated like a criminal.

She said when Wang met the secretary-general of the Pacific Islands Forum, Henry Puna, during the visit, she watched as visiting officials tried to remove an ABC cameraman.

She said the Chinese official told him, ‘You’re not Fijian; you’re from the ABC and not welcome.’

The ABC’s Stephen Dziedzic said he was surprised by and unprepared for the hostility towards the media. He described how a member of the Fijian military put a hand on his right arm at the joint news conference with Prime Minister Frank Bainimarama, urging him to stop asking questions.

But in a surprise move afterwards, the Chinese ambassador to Fiji agreed to take questions and gave the first confirmation that the multilateral security treaty had been rejected by Pacific leaders.

Dziedzic said he didn’t feel manhandled, but it was a fraught and difficult situation. ‘It was ridiculous they didn’t take questions,’ he said.

Simpson said that when US Secretary of State Antony Blinken visited Fiji in February, only one media organisation was chosen to ask a single question during the entire visit.

In Vanuatu, which has a history of government pressure on the media, the Chinese delegation held a press conference, but again with no questions.

Australian freelancer Ginny Stein, who had been hired to file for China Global Television Network, the Guardian Australia and Agence France-Presse, says she was initially told the press conference was only for local media but was allowed to attend along with fellow Australian freelancer Ben Bohane.

Bohane says he’s concerned that weeks later local journalists are still waiting for details of the agreements signed with China to be made publicly available. He said nothing had been published yet.

Samoa has traditionally been the model of press freedom in the region, but it has slipped from 21st place in 2021 to 45th place in the 2022 World Press Freedom Index.

Alexander Rheeney is editor of the Samoa Observer, a newspaper that’s held in high regard throughout the region for its independence. He raised the issue of access to the Chinese delegation directly with the Chinese embassy on the Thursday before Wang flew into Samoa.

But they said there would be no joint press conference or even a one-on-one interview with the foreign minister. Rheeney said he got the impression that the Chinese were in control of the whole state visit and protocols including media queries.

In Kiribati, the Chinese delegation made a brief five-hour stop despite a strict Covid-19 lockdown. Local journalist Rimon Rimon said the government had been coerced by Beijingto accommodate the visit.

Rimon said the government had been very secretive and people were frustrated and angry after only learning about the trip from a post on Facebook. He wasn’t allowed to ask questions and was told to stop filming by police outside the president’s house while the meeting was underway inside.

Rimon said he believed the order came from the Kiribati government in agreement with the Chinese delegation. He said Kiribati and China signed 10 agreements during the brief stop, but none has been made public and he’s been unable to obtain details of them.

While the Chinese delegation was exempt from strict Covid-19 border controls, about 20 high-ranking officials including the president, his advisers and police had to go into quarantine for a week after the visit.

In Tonga, the biggest Pacific debtor to China, the media was again blocked.

Veteran journalist Kalafi Moala, a long-time advocate of media freedom in the Pacific, said there was no briefing and no press conference but media was allowed access to take photos.

Papua New Guinean journalists faced the same treatment. The timing of visit raised some local concerns because the government was in caretaker mode in the lead-up to the election.

Two questions were permitted at a scheduled joint press conference—one for local media and another for the visiting Chinese media. However, Wang later allowed the resident ABC correspondent, Natalie Whiting, one question.

The Chinese success in controlling the media on this trip ended in Timor-Leste. Newly elected President Jose Ramos Horta, a long-time supporter of a free media, won a concession to enable local journalists to ask three questions.

Australian media consultant Bob Howarth, a former adviser to the Timorese media, described the pushback against Chinese secrecy as a press freedom breakthrough. ‘Journalists there are very active, with the union and the press council working together … Most Pacific countries have weak press councils and don’t have unions,’ he said.

Sue Ahearn is the creator and co-editor of the Pacific Newsroom and co-convenor of the Australia Asia Pacific Media Initiative. She was a senior executive at ABC Radio Australia and is currently studying Pacific development at the Australian National University.