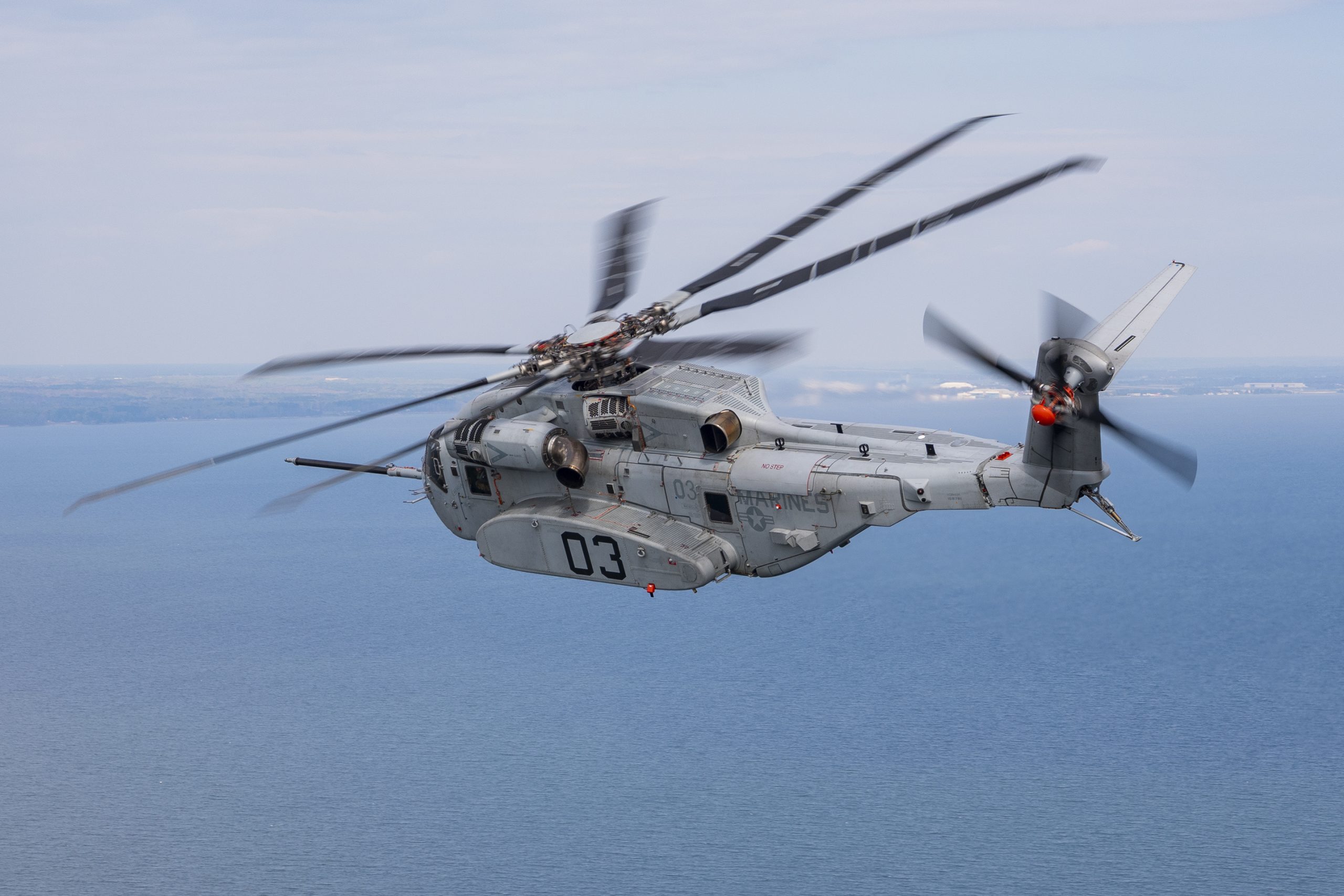 I have been able to generate a set of updates to the CH-53K this summer.

The first was a June interview with Col. Perrin, then a July update from Lt. Col. Franks, head of the VMX-1 detachment at New River, and then again with Col. Perrin in August 2021.

I am going to start with the June interview with Col. Perrin.

The coming of the CH-53KTM to the USMC could not come at a more appropriate time.

As the Marines are focused on mobile basing as a key aspect of how they contribute to crisis management, the capabilities of the new aircraft will be in immediate demand.

It was clear from my visit to II MEF that the CH-53K was an important addition to the force as they faced increased demands with reduced force structure.

Although II MEF is not the epicenter for receiving new Marine Corps kit, with the exception of the CH-53K (it does not have F-35Bs as part of its organic fighting force, e.g.), it must find ways to innovate with the kit it has and to find new ways to work with an evolving U.S. Navy to sort through how to deliver combat effects from ashore and at sea in support of the maritime fight.

Clearly, heavy lift is a key part of being able to meet their missions.

When looking at the North Atlantic arc from North Carolina to the Nordics, strategic mobility is delivered by a triad of airlift, sealift and pre-positioning.

Where best to pre-position?

How best to protect those stockpiles?

And how to move critical supplies to the point of need rapidly?

Reworking the Marine Corps force to operate more effectively with the U.S. Navy requires a reset of the logistics enterprise.

As LtCol Smith, II MEF logistics lead officer, articulated the challenge: “How do you shape convergence of your technology, your tactics, your techniques and procedures with the assets which are available to an effective combat force?”

The CH-53K is coming into this context and will be one of the answers to these questions.

Recently, I had a chance to talk with Colonel Jack Perrin, Program Manager, PMA-261, H-53 Heavy Lift Helicopters, Naval Air Systems Command at Patuxent River, Maryland, to get an update on the coming of the CH-53K to the combat force.

Question: You are on track this summer to fulfill the Initial Operational Test & valuation (IOT&E) requirements?

Col. Perrin: Yes. VMX-1 at New River have our first fleet aircraft, and they are doing extremely well.

In their Operational Test training, I believe they have trained five aircraft commanders and two co-pilots already.

They also have four crew chiefs and two aero observers, or the air crew in the back of the aircraft.

They started flying in January. And in the month of April, they flew over 50 hours on that single aircraft. Although we are working with early data, early information, the aircraft is doing really well and has tremendous availability.

Though we are in the process of validating maintenance procedures for the first time, it’s been going really well.

It’s an all-hands effort, I have not only the Marines out there doing it, but they’re supported by Sikorsky, and by my engineering and logistics teams to make sure that we’re working through all the processes, and everything is working well.

At the end of March, they received two more aircraft at New River. Those aircraft were complete with their modifications to fit into the proper configuration for IOT&E, and those aircraft have recently started flying, and they’re both also doing very well.

It takes the squadron about a month to go through the process of accepting newly delivered aircraft.

They’re right on track and doing well. I expect IOT&E to start this summer.

Our first big detachment for IOT&E is going to be going out to Twentynine Palms for over a month to do operations in the mountainous and desert environment out there in the training area in California.

We’re getting ready this month to finish our testing for helicopter area refueling. It’s basically just a check in the box for us. We’ve done most of the testing for that. We’re well ahead of the game on that.

I expect us to hit IOT&E running.

It’s going to be really good for the Marine Corps., because as soon as we get through IOT&E, the Marine Corps will have the opportunity to declare IOC, and we’ll be able to start transitioning that first squadron at New River.

Col. Perrin: In August they’re going to go out to Twentynine Palms.

Question: I visited New River last December and was quite impressed with the progress evident with regard to the aircraft and its maintainability.

How would you characterize the progress at VMX-1 at New River?

Col. Perrin: “We’ve learned tremendous lessons in our log demo that we started back in 2018. And from those we found some deficiencies, so things we wanted to change and improve upon, and we’ve done that. I think you’re really seeing the fruits of that labor in the amount of availability that we’re seeing out of the initial aircraft at New River.

As I mentioned earlier that one aircraft was flown 50 hours in one month.

50 hours in one month for any platform is, especially for a helicopter platform, is a tremendous amount of work.

Talking to the digital part of the 53K, we are using a really a leading-edge integrated maintenance device. It’s basically a computer, but instead of just having PDFs of the maintenance manuals on it, it provides an interactive maintenance manual designed for and supportive of being able to do that maintenance.

And that system has really driven a lot of efficiencies into executing maintenance, because the maintainer can take it and have that digital environment right there with him.

We also have an onboard mission computer, what we call the integrated vehicle maintenance system.

And that integrated vehicle maintenance allows us to record data on the aircraft, not only the performance data, how the engines are doing, how the gearbox is doing, what the status of the aircraft is, where the pilots put it, what environment it was flying in, but also records the vibrations of the aircraft.

It’s integrated into the maintenance system.

And that system has a data center that takes the data that we’ve gotten off the aircraft and reviews it automatically.

We run algorithms on it that can show you a new predictive maintenance procedure for the aircraft.

I don’t really know of any other platform that’s at that level of integration already.

We’re going to get to a full condition-based maintenance aircraft, because it is digital, because we do collect all the data on it and we’re able to gather that data, store that data, and able to run algorithms and programs on it so that you can manipulate that data and better do predictive analysis of how that aircraft is performing, and where your bad actors are.

It also helps us reduce the Operations and Support costs of this platform, even compared to the CH-53E.

So that’s another big bonus for us and the Marine Corps, as we move forward, trying to make the aircraft not only affordable in production, of which we certainly are doing.

We’re seeing the cost of the aircraft coming down as we’ve just recently got a handshake and within the next month or so, we’ll be awarding lot five with an option for lot six for a total of 18 more aircraft that we’re putting out in the production line to deliver to the fleet.

But we’re also focused on reducing the cost to operate and maintain this aircraft.

To do this we are shaping a fleet common operating environment to manage the fleet.

Question: I would like to return to the digital point for a moment.

The CH-53K is a digital aircraft as you have said and working digital data as part of the operational and sustainment efforts is a key foundation as the force works towards adding autonomous systems – which are completely software driven to the force.

How would you characterize the impact of the manned digital system preparing the way for unmanned systems?

Col. Perrin:   The digital character of the aircraft reduces the workload of the pilots and the crew so much that they can have that spare capacity to do those additional tasks that they will see in that digital battlefield, whether it’s communicating or operating with other symbiotic platforms that are going be out there.

Because I agree with you, the future really is about the unmanned world and that force multiplier that they can provide to some of those manned systems, but to get there you have to start by understanding, working with and mastering digital backbone manned systems.