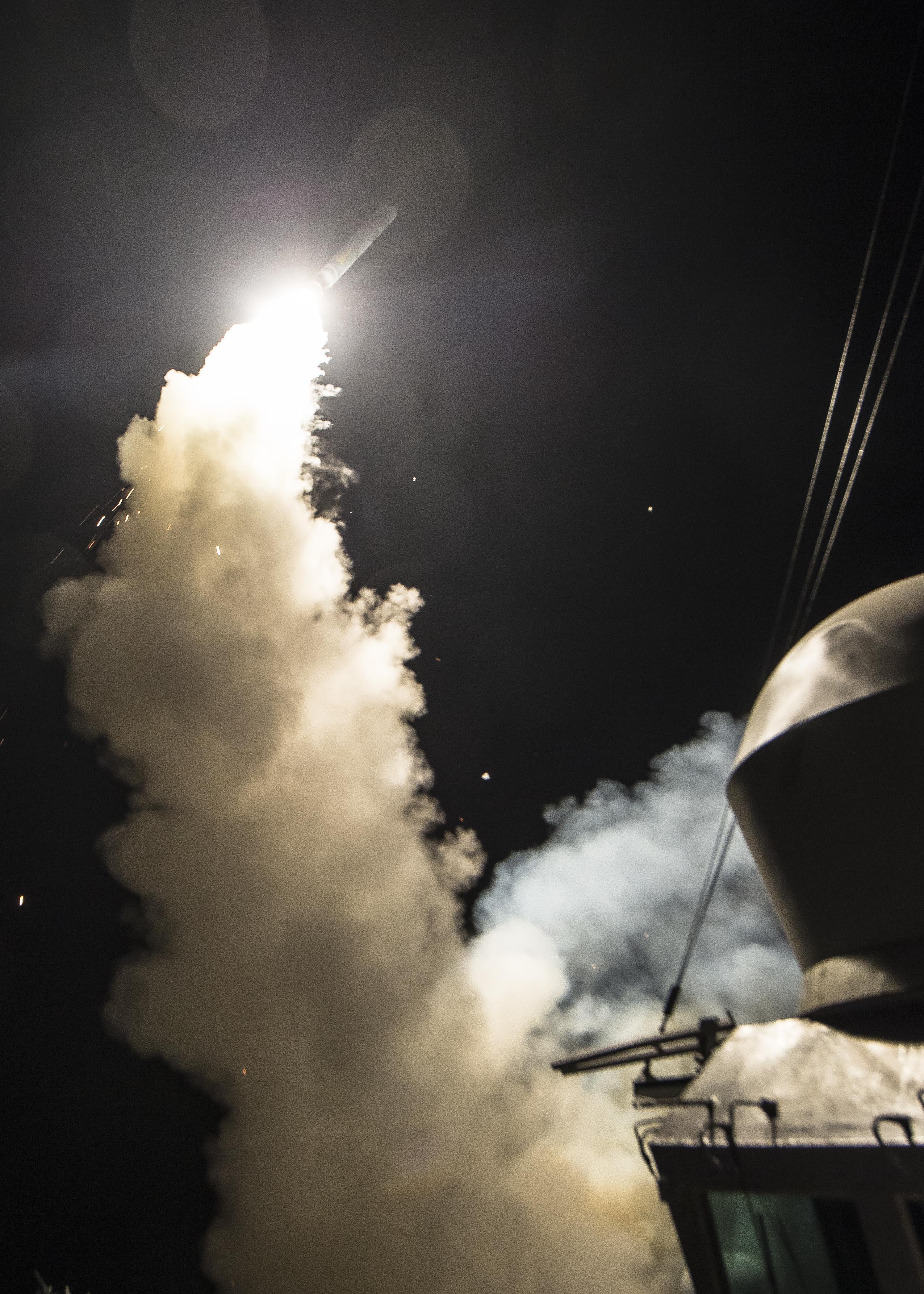 The past decade prioritized the land wars, and the Navy along with the Air Force have provided key elements of support and engagement in the support of the ground forces.

With the growing threat from competitors who would engage in high tempo and higher end operations, the Navy along with the Air Force is focusing more intently on the high-end fight.

For the US Navy, this means in part ensuring the safety, security and performance of the fleet against threats in the maritime domain to enable the fleet to support multi-domain operations.

During our visit to NAWDC in the summer of 2017, we had a chance to sit down with officers from two elements of NAWDC which would seem at first blush quite different from one another, but in the evolving high end fight and the return of key concerns for effectiveness in at sea operations, actually are.

We interviewed LT Chris “Cathy” Eckel and LT Alicia “New Girl” Willms from N-8 which is a department focused on rotary wing tactics and employment, LT Kirby “TK” Myers who was wearing  Silent Service “Dolphins” from N20, which is a department which focuses on TLAMs and their integration into air operations.

According to the US Navy, N-8 is described as follows:

According to the US Navy, N-20 is described as follows:

The Tomahawk Landing Attack Missile (TLAM) Department provides direct support to U.S. Fleet Forces Command (USFFC) in the development and standardization of tactics, techniques and procedures for the employment of the Tomahawk weapon system.

In addition, TLAM provides training to the CVW, fleet, and joint commands on TLAM capabilities and strike integration

The role of the rotary wing for the CAG is pretty clear-cut – it is primarily focused on ship defense.

And to do so, the Navy operates two helos, the Romeo and the Sierra to combine between them the sensors and missile payloads necessary to provide for close in and medium range carrier defense.

The dyad is worked with Romeo as the sensor rich aircraft and Sierra the weapons heavy strike asset and the interactions between them are designed to provide seamless ship protection and with the sensors and coms onboard links to other assets, which can provide for ship defense as well.

“Both are H-60 helicopters. But the 60 Romeo is a sensor rich aircraft.

“The Romeo has ESM, RADAR, interrogators, all things that make it a very, very good coordination and reconnaissance type platform.

“In contrast, the Sierra carries guns, equipment, and various missiles to provide the strike punch for the dyad.” “The advantage of the Romeo is that the crew can actually manage the maritime picture, and direct aircraft in different places and different sectors, and provide a significant amount of SA to the strike group, particularly the high value unit like the aircraft carrier.

“The Sierra can do that to a much, much lower extent.

“But the advantage of the Sierra is that it is a significantly lighter helicopter, so there can be a lot more weapons/equipment in the air to be used by one of these platforms.

“The way the helicopters work together now is relatively efficient.

“I would like to have two or three Romeos in the fight, somewhere, with all of their sensors turned on, and providing all that SA, but have several Sierras that have lot of weapons in the air, if I need them.”

“The Romeo is a heavier airframe.

“So if I can have one or two helicopters configured for anti-submarine warfare, and then one that is just a sensor platform, I can have multiple Sierras that carry a lot of weapons because they have the extra weight to do that, the extra power to do that.

“Then, I have a lot of assets in the air to direct and coordinate depending on the strike mission.”

As the Fire Scout is currently being worked with the S-60 into a composite detachment onboard the LCS, it is anticipated that Fire Scout or a UAS capability will become part of the rotor wing providing for ship defense at some point in the future.

And as off boarding of weapons strike grows in significance and capability sensors onboard the rotorcraft can be leveraged by other elements of the strike force for the ship defense or perhaps other missions.

With regard to TLAMS, their role has been significant in providing for a land attack capability.

And as a submariner, Lt. Myers is working integration with the CAG as part of the extended reach of the airwing.

Indeed, a key function of TLAMS for the aviation community has been the destruction of enemy capabilities threatening the ability of the air wing to operate in contested environments. “Tomahawk is a very integral part of strike warfare.

“I need to essentially be the day zero weapon that allows for attack air to dominate the air.

“Before that, we need to get rid of certain things in the way.

“Attack air is not going to be able to fly through certain surface to air missile sites without serious investment.

“My job, I feel, is to protect people.

“I want to set the battle space so that all of the aviators out there can fly safely.”

The current TLAMS are GPS enabled and largely focused on fixed targets but the evolution of the systems onboard the TLAM will allow for greater in flight repositioning and significant improvements against electronic magnetic threats.

The TLAMs and follow on weapons will form a key part of the enhanced capability of the fleet afloat to fit and win conflict at sea.

Put in other terms, TLAMS have been about land operations; now with the shift to higher intensity operations the ability to defeat adversaries at sea is a key part of the way ahead, within which the weapons revolution needs to evolve to provide enhanced capabilities to the fleet to defeat an adversary afloat or using land and air assets to threaten the fleet.

Both officers emphasized the need to build up the inventory of weapons in the arsenal and viewed this as even more important than building new ones.

Building new ones will take time, and although clearly important, the focus on fighting with the fleet you have now prioritizes an inventory build up for the current operating force.

The officers both highlighted as well that as you add new weapons, there is a time lag as well as the crews learn the capabilities and would like to see enhanced training capabilities and accelerated acquisition as well to ensure that new weapons can enter the force more rapidly.

But if presented with a choice between ramping up current weapons or waiting for new ones, the officers clearly weighed in on the former.

The officers discussed being able to support the fleet at sea if needed with the TTP capabilities at NAWDC.

“We have a fly away team.

“And a flyaway kit, so in the event in which they need subject matter experts to go to a CAOC and say, “Hey, what is the way that we can integrate TLAM into this fight?” We’re ready to go to provide that support.” We concluded by discussing the dynamics of change in providing authorities at sea to deal with the new threat environment.

Notably, in the world of the past decade TLAMS are launched by a very high level of a command authority.

As weapons like TLAMS become important to providing dynamic protection to a fleet at sea, there clearly needs to be authority at sea to use weapons to ensure the security of the fleet.

If you are going to have distributed lethality, you certainly need organic defense to ensure the safety and performance of the engaged fleet.

Admiral Swift, Commander of the Pacific Fleet, and his team were working hard on the rethink on decision-making authorities.

According to Admiral “Hi Fi” Harris: “What authorities should reside where and when? They are driving towards mission command which is crucial to deal with evolving threats.”

In short, the refocus on high end warfare and the probability of confronting an adversary at sea is reflected in the thinking and training at NAWDC.

First, as always inventory levels and the ability to surge weapon production is becoming much more important in the National Command Authority shift focus from “slo-mo” war to preparing for high intensity combat. Mobilization becomes even more important in the recrafting of the US military for the decade ahead.

Second, the current visit to Australia also highlighted the key role which Admiral Swift played in the command post exercise part of Tailsman Sabre 2017 which involved shaping effective C2 and distribution of authorities in a contested battlespace as well.

Third, Raytheon and the Navy are closing on a deal to reshape the TLAMS for the maritime battle.

The Navy and Raytheon are close to signing a deal to integrate a new sensor into the Tomahawk Land Attack Missile to allow the missile to attack moving targets at sea, the head of the Navy’s Tomahawk program told USNI News on Tuesday.

“We’re signing the contract now, there will be a couple of year development effort to determine the configuration of the seeker to go into the missile and a couple of years to take it out and test it to accurately know what the performance is so the fleet will have confidence in the system,” Johnson said following a ceremony celebrating Raytheon’s delivery of the 4000th TLAM to the Navy.

“When maritime is ready to be cut into the Tomahawk, we’ll work with the resource sponsor to find out what the right number is.”