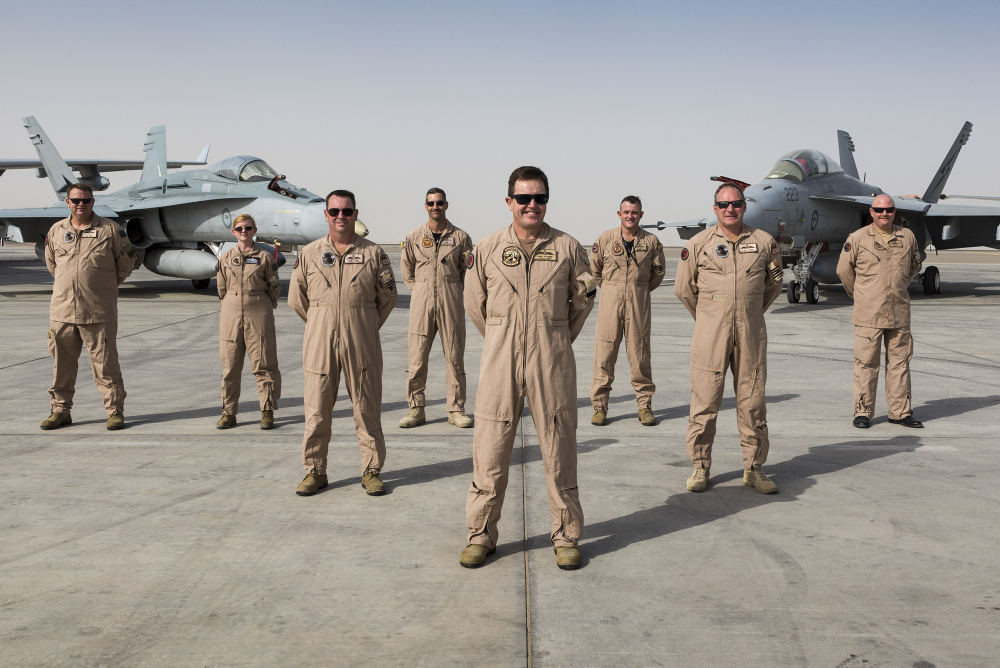 During a visit to Royal Australian Air Force (RAAF) Base Williamtown in March 2018, Murielle Delaporte and I had the chance to talk with the new commander of the Air Combat Group, Air Commodore Kitcher.

RAAF Williamtown is undergoing significant infrastructure modernization as it prepares for the F-35A and as the RAAF’s Air Combat Group (ACG) spearheads the transition in the air combat force.

They are undergoing a quite rapid transition from a legacy aircraft to a fifth generation force in terms of completely retiring their Hornets in favor of acquiring their F-35As.

This is a unique combat capability and represents a shift to the RAAF working with the USAF alongside their continuing long standing and excellent working relationship with the USN.

From this, the RAAF will shape something a bit different than the US forces will fly themselves.

From this, the RAAF will shape something a bit different than the US forces will fly themselves.

“We’ve had a long and very fruitful relationship between the Royal Australian Air Force and the US Navy.

“We have operated the Classic Hornet since, since 1986, and more recently, the Super Hornet, and the Growler.

“It’s been a long and enduring relationship, which has proved beneficial to both, and certainly we couldn’t have got where we are with Super Hornet and Growler without the outstanding support the US Navy provided us.

“With the F-35A we’re expanding our relationship with the US Air Force.

“And clearly standing up our squadron at Luke AFB and working with the USAF has been beneficial and a key driver to this evolving relationship.”

During a visit to Williamtown, two years ago, I visited the base with an eye to looking at infrastructure changes.

Those changes were just charging with one of the first F-35A buildings just being built.

Now two years later, infrastructure is being built up significantly and we toured the base to see many of these changes.

Air Commodore Kitcher talked about the changes which are designed to augment the ability of the base to operate with the new aircraft but also to enhance the ability to command the evolving force.

ACG Head Quarters is located in a building that was a former battery shop. Now a modern building to support the command, as well as other Headquarters and commands from RAAF Williamtown is being built.

The base is being wired to handle the advanced data systems being established with a clear eye to efficiency, effectiveness and security.

“We are seeing two basic types of change.

“The first involves the base refreshing itself. This involves base redevelopment with the base infrastructure being renewed and replaced, including runway and taxiway extensions.

“The second involves building the infrastructure and support facilities for the F-35A squadrons which will train and operate from the base.”

The OBISC or On Board Information System Center for the F-35A is built with personnel working in the Centre.

The Number 2 Operational Conversion Unit (2OCU) building is largely complete and will support the training squadron but will also house Number 3 Squadron (3SQN) when they return from the US at the end of 2018.

“3SQN will come back to Australia at the end of the year and work on the Australian Validation and Verification Activities for F-35A.

“2OCU will look after all aircrew and maintenance training for the RAAF F-35 capability.”

By the end of 2020, there will be over 30 F-35s at the base “which is initially sufficient aircraft for 3SQN and 2OCU, and that’s our Initial Operating Capability number of aircraft.”

By the end of 2020, there will be over 30 F-35s at the base “which is initially sufficient aircraft for 3SQN and 2OCU, and that’s our Initial Operating Capability number of aircraft.”

The basic change from Hornet to F-35A at the base is driven by the data rich nature of the aircraft and the security changes associated with handling and processing the data.

From this point of view, working with Super Hornets has been part of the overall transition as well as it introduced the RAAF to the challenge of handling data differently from our legacy aircraft.

“We need to be able to port various security grades of data into and around the facilities on the base.

“AF learnt many lessons when introducing the Super Hornet and we will build on managing those sensitivities for the introduction of the F-35A.”

The Importance of Luke AFB in the F-35 Global Enterprise

The F-35 community has been stood up at Luke AFB with various nations training together at the facility for the initial cadre of pilots and maintainers generated by the Luke AFB training facilities.

“We have been impressed by the approach and attitude of the USAF trainers as we are working closely with them in training 3SQN aircrew and maintainers.

“And we have been extremely impressed by the attitude from USAF leadership which allowed RAAF personnel to fully integrate the with the US folks in the 61stFighter Squadron at Luke.

“It would have been very easy to have two teams just working out of the same squadron, but that’s exactly what the USAF did not do..

“The USAF and RAAF have worked in an integrated manner, which the RAAF is extremely thankful for.

Transition Dynamics for the RAAF

Air Commodore Kitcher highlighted the strategic goal of ACG with regard to the transition as follows: our challenge is to actually transition to the new capabilities in minimum time whilst ensuring we keep the overall force healthy.”

They have an aggressive schedule with regard to F-35A transition.

They are transitioning from four Hornet to four F-35A squadrons in just four years.

“That is a more rapid change, and a more aggressive schedule than any other F-35 user is on track to do.”

And in that transition, a key objective is establishing a “healthy training system in Australia.”

And this training system will be supporting F-35As at Tindal Airbase in the Northern Territory as well.

That base is undergoing a significant infrastructure rebuild as it will receive F-35As early next decade as well.

Incorporating the F-35A, the Super Hornets, the Wedgetails and the Growlers into an integrated air combat force is the broader transition facing the RAAF.

The challenge, which is a good one to have from the standpoint of Air Commodore Kitcher, is to learn how to fight effectively with a fifth generation enabled force.

“Learning to fly the F-35A is not the hard part.

“Working the mission command piece is a key driver of change for sure.

“And although we are working closely with the USN and the USAF, we will do things differently as we integrate our unique force package and adapt it to Australian conditions.”

Another part of the transition is working the sustainment piece.

“We need to ensure that we have the required number of experienced and capable technicians to generate the number of sorties we need to generate, and the sortie rate is supported by the engineering and logistics systems.”

And we discussed another key aspect of combat transition, namely learning or shaping the C2 piece of the force evolution.

What can be overlooked with regard to the F-35 is that it is many ways part of the transition to distributed C2 rather than being viewed as a classic ISR capability, whose function is to distribute data widely in the battlespace.

As Air Commodore Kitcher said: “With the fifth generation aircraft, there are key missions they need to perform themselves and just do it, potentially without proliferating information support to the broader force.

“Everyone’s going, “But I need the information that can come off the aircraft.

“We need to be able to say no you don’t, in this particular case, you don’t need that information right now, you may get it later.”

“It is about sorting out and collectively agreeing, from the tactical squadron to the higher HQ’s, what we should choose to do versus what we can do,” Air Commodore Kitcher said.

And that is a good way to end.

Clearly, Air Commodore Kitcher and his team are focusing on what needs to be done to deploy, develop and shape a fifth generation enabled force and prioritizing and executing those needs to get the job done.