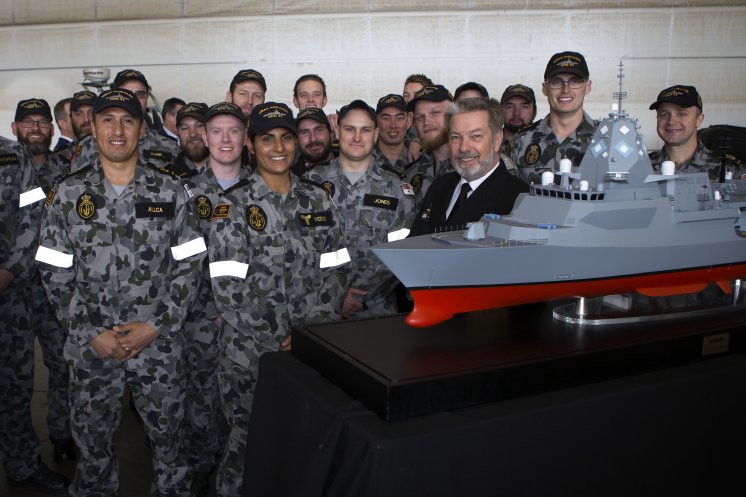 In 2017, Vice Admiral Barrett, Chief of the Royal Australian Navy, published a book entitled The Navy and the Nation: Australia’s Maritime Power in the 21st Century.

In this book, Barrett underscored how important maritime power was to the future of Australia, and the importance of reinforcing the bond with the nation in building out the new Australian navy in the decade to come.

MOST PEOPLE THINK that Navy is something else.

They know it exists, they may even have a rough idea of what it is for, but they don’t think it’s got much to do with them.

The Navy is a national enterprise in which everyone is involved and which delivers peace and security to everyone in the country.

He then underscored the challenge of rebuilding the Navy.

The RAN is on the cusp of major reinvestment, and the institutional and organisational changes that will inevitably follow in consequence.

The Defence White Paper issued in February 2016 charts a new course for the Navy as it re-equips itself with new offshore patrol boats, a new class of frigate, a new and expanded submarine force, and continues the acquisition of the new Hobart class Air Warfare Destroyer.

So, the question is: how does the Navy prepare for the shape of things to come?

Frankly, renewal on this scale is daunting.

Its management demands clarity of purpose, effective communication to ensure that everyone knows what the task is and what they are expected to do, and leadership at all levels that encourages, empowers and rewards.

We need to think differently.

In other words, by reviewing our basic operating concepts, reimagining the way that Navy should view itself in the twenty-first century, re-examining our assumptions and, most importantly, re-engineering our modus operandi—especially the way we manage domestic and international relationships—and our professional behaviours, Navy will be better positioned to take advantage of the promise of things to come.

The building of a new class frigates is part of this overall effort to engage the nation in its defense.

In a piece published by the Royal Australian Navy on June 29, 2018, this linkage was underscored.

Navy’s future frigates will be known as ‘Hunter Class’ with the Chief of Navy confirming the first of the Hunter Class Guided Missile Frigates (FFG) to be commissioned in the late 2020s.

In a signal to all Navy personnel, Vice Admiral Barrett said class name was chosen to reflect the tradition of naming RAN ships that promote Navy’s bond with the Nation. In this case, the first three ships of the Hunter class will proudly carry the names of three major Australian regions, all with strong historical maritime and naval ties.

The class name was specifically chosen for the alternate interpretation of a ‘hunter’ personifying the role of the frigates as a submarine hunter, with the term embodying the pursuit of prey.

“The replacement of our eight Anzac Class Frigates with nine frigates optimised for anti-submarine warfare…will significantly enhance the lethality of our surface combatant capabilities,” CN said.

“These ships will incorporate world class design factors and integrated systems…that will change the way we conduct anti-submarine warfare operations. Our interoperability as a joint force and with our allies will improve.”

As a result of the construction and delivery drumbeat, the Anzac Class frigates currently in operation will be in service through to the early 2040s. CN said the future frigate announcement is a game changer for Navy, the ADF and defence industry. “Beyond the frigate design, this decision demonstrates that Navy is an intrinsic national capability that connects the private and public sectors to deliver a fundamental national objective – security above, on and under the sea.”

And in a piece also published by the Royal Australian Navy on June 30, 2018, the impact of the new ship on the Navy itself was underscored.

Navy people were taking in the news on Friday that UK firm BAE Systems had been selected as the preferred tenderer for the largest peacetime naval shipping construction project in Australia’s history.

BAE’s Global Combat Ship – Australia has been assessed as the capability best suited for our nation, providing the Australian Defence Force with the highest levels of lethality and deterrence our major surface combatants need in periods of global uncertainty.

Lieutenant Commander Luke Bogan watched the big announcement from his workplace, at the Osborne Naval Shipyard in South Australia. Luke has himself recently been assigned as Marine Engineering Officer (MEO) to another high tech capability – the Air Warfare Destroyer NUSHIP Brisbane, which has recently completed sea trials.

He said news of who will build the new frigates had been met with great interest among his shipmates.

“It’s obviously very early days, but this will be a game changer for Navy.

“As we watched the announcement, I think we all understood that we were witnessing something pretty historic.”

The Future Frigates will be more capable than the Anzac Class frigates they will replace. Their primary mission is anti-submarine warfare, and they will have sufficient range and endurance to operate effectively throughout maritime South East Asia and will be able to be deployed globally.

“The capabilities the Hunter Class will have are very impressive,” Lieutenant Commander Bogan said.

“There are junior sailors and officers reading this now who might well be serving in HMAS Flinders when it rolls off the production line.