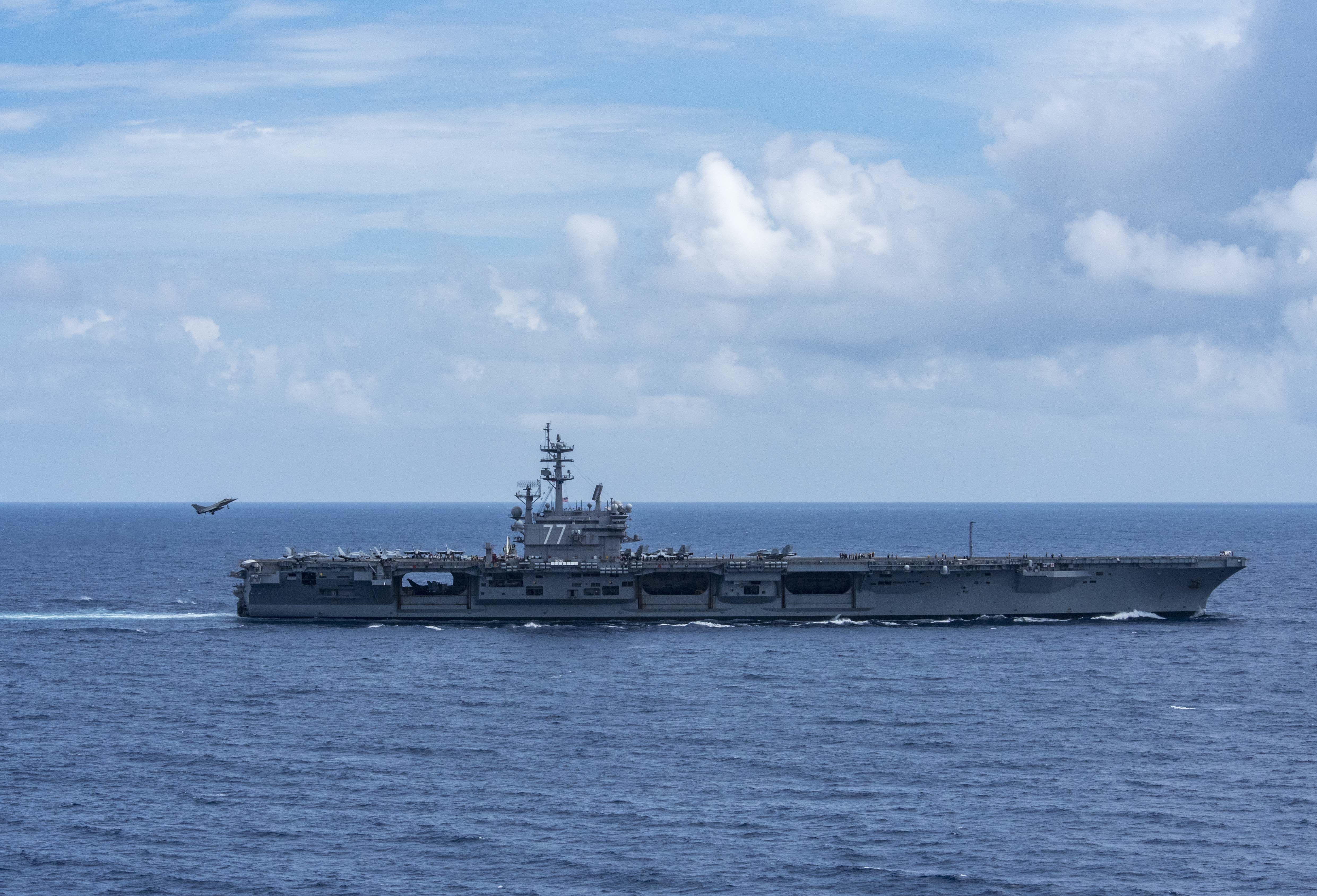 The ship is seen in the Atlantic Ocean conducting carrier air wing exercises with the French navy.

In a two part series published by USNI News, the activities aboard the Bush were discussed.

Performing touch-and-go’s, catapult launches and arrested landings, French naval aviators are now qualifying aboard USS George H.W. Bush (CVN-77) and speeding up the timeline for their carrier to be combat ready.

“We are beginning early what we’re supposed to do next autumn,” said Cmdr. Marc, the French airwing commander aboard George H.W. Bush. Citing security concerns, French Navy officials asked to be identified using first names only. “That’s a great to start for us and being really ready to start again with Charles de Gaul next autumn.”

Charles de Gaulle is France’s only carrier with catapults and arresting wires. Unlike in the U.S., which currently has 11 such carriers, when France’s sole carrier is in the shipyard, French aircrews do not have another platform to operate from.

If the French sailors had not come to train and perform carrier qualifications in the U.S., Cmdr. Marc said Charles de Gaulle would require many more months of training and exercises before being ready for combat missions.

Charles de Gaulle last deployed to the Eastern Mediterranean in 2016. When that deployment ended, the carrier entered the yard for an 18-month maintenance period, which is expected to be completed this summer, Cmdr. Marc said.

During past deployments, Charles de Gaulle has played an integral role in the fight against ISIS in Syria and Iraq. For several months in 2015 and 2016, during a lull in U.S. carrier operations in the Middle East, Charles de Gaulle led the allied strikes against ISIS targets in the region and served as the command element for U.S. Naval Forces Central Command’s Task Force 50 – the first time a non-U.S. ship has served as a Task Force commander.

When Chief of Naval Operations Adm. John Richardson and Chief of Staff of the French Navy Adm. Christophe Prazuck stood together on the flight deck of carrier USS George H.W. Bush (CVN-77) on Monday, pairs of fighters flew overhead – one American F/A-18E-F Super Hornet, one French Rafale at its side.

E-2C Hawkeyes – the U.S. Navy planes with plain gray radar domes, the Marine Nationale ones with their anchor and bullseye naval aviation emblem painted on – sat on the flight deck, set to be used interchangeably in later flight operations.

A flurry of colorfully clad flight deck crew members scurried around the admirals, with the only easily identifiable marker of nationality being the French crews’ distinct purple pants compared to the U.S. Navy’s khaki or dark pants.

This level of integration is exactly what the admirals hoped to gain from exercise Chesapeake 2018, originally conceived of as a means to get French pilots back at sea while their sole carrier wraps up a deep maintenance period.

“As we look out on the flight deck waiting to see the next launch, it’s almost impossible to tell the difference between U.S. sailors and French sailors as they prepare for the next launch,” Richardson said in the ship’s bridge, in a message broadcast to the ship over the 1MC.

“This is exactly the level of teamwork we’re going to need as we confront high-end competitors at sea in high-end blue-water warfare. We’re going to need our partners and allies to fight with us in the most advanced ways at sea to maintain sea control, maintain air control and protect this international order we’ve worked so hard to build together over the last 70 years.”

The photo shows a Rafale Marine attached to squadron 17F of the French navy landing on the aircraft carrier USS George H.W. Bush (CVN 77) and the photo is credited to the US Navy.