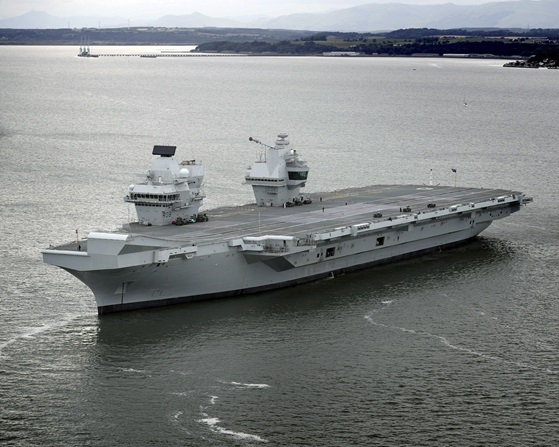 I had the chance to visit HMS Queen Elizabeth in Scotland as the carrier was being built in 2015.

Now during a visit to Portsmouth in late April 2018, I had a chance to see the carrier again and to talk with senior UK Navy and industrial personnel involved in working the carrier into an operational combat system.

The carrier will come later this year to the United States for F-35 integration efforts, and will be doing sea trials next year which will involve the USMC as well.

I had a chance during my visit to meet again with Captain (retired) Chris Alcock.

The last time we met was during a meeting to discuss the carrier and the way ahead for the RAF and Royal Navy with the carrier at the Ministry of Defence in 2015.

Captain Chris Alcock was then Head of the Carrier Strike Division in Navy Command Headquarters. He is Programme Manager for the QEC Carriers and also responsible for capability Integration of the Carrier Air Wing into the platform, specifically LII F35B, Merlin Mk2 and Crows nest.

And during that interview he highlighted how significant a change bringing the new carrier into the UK force structure was for the future of UK defense:

Question: How demanding a shift in RN thinking is the introduction of this ship?

Alcock: It is an important shift.

There are a lot of people that have never been on a carrier before, and the Royal Navy has been very much, since the demise of the carriers, has been a very much a frigate Navy.

We are generating a new Maritime Task Force concept (MTF) to shape the concept of operations going forward.

This clearly draws on elements of the past, but requires a fresh think as well.

The constitution of the task group is critical to depending on what we do with the carrier but the carrier and its air wing are the centerpiece enabling the entire task force.

We have worked closely with the USN and the USMC in the regeneration of Carrier Strike and the close working relationship has been hugely appreciated and also the work they have done for us and with us in support of this aim.

The build the new carrier, the UK shaped a very innovative approach to building a new large ship which mobilized UK industry and built the ship from sections shipped from various parts of the country to the Scottish shipyard.

The HMS Queen Elizabeth Delivery Director, Jon Pearson is now at Portsmouth and Chris Alcock and I met briefly with him during this visit as well.

Pearson is now identified as the Warship Support Director and wrote this note earlier in April prior to my visit.

As Warship Support Director at BAE Systems Maritime Services, part of what I do involves overseeing the work done here at Portsmouth Naval Base to support HMS Queen Elizabeth on behalf of the Royal Navy.

You could say I know a little bit about the Royal Navy’s new flagship aircraft carrier.

My involvement in the carrier programme spans from 2003 during the completion phase, all the way through to last year when, as the Aircraft Carrier Alliance’s Queen Elizabeth Delivery Director, it was my responsibility to get her ready for her delivery to Portsmouth and hand over to the Royal Navy.

Since the beginning of the carrier programme the vessels really captured the British public’s imagination. They seem to have an affinity with the Royal Navy, the military in general, and anything connected to it.

This is the biggest ship we’ve built for the Royal Navy, and it fills a gap in capability that’s been there since the 1970s when we lost the ability to fly fixed wing aircraft from carriers, plus it’s a symbol of British military might and the role we play in the world.

Because of that, the programme has really been delivered from the outset squarely in the public eye, with scrutiny from senior politicians, senior Royal Navy officers, and senior members of all three organisations involved in the build – BAE Systems, Thales and Babcock.

That’s certainly added an extra dimension to building the largest warships the Royal Navy has ever had.

Building any first in class ship is difficult, especially the latter stages when you’re incorporating all the systems and getting it ready for trials, but building something the size of HMS Queen Elizabeth, the volumes we were dealing with on a day to day basis, was something else entirely.

We had to install over 3 million meters of cable, test 80,000 pipes, commission nearly 300 systems and handover 3,000 compartments.

But throughout the programme there has been a real sense of pride in what we have delivered, not just from the ACA but also the Royal Navy and the ship’s company in particular – they were excited about being the first ship’s company even before they had a ship they were able to sail!

The interest around Exit Rosyth, and then the international coverage of First Entry Portsmouth, plus the thousands of people who came to Portsmouth very early that August morning to welcome her in, really showed us that our pride is shared across the nation and beyond.