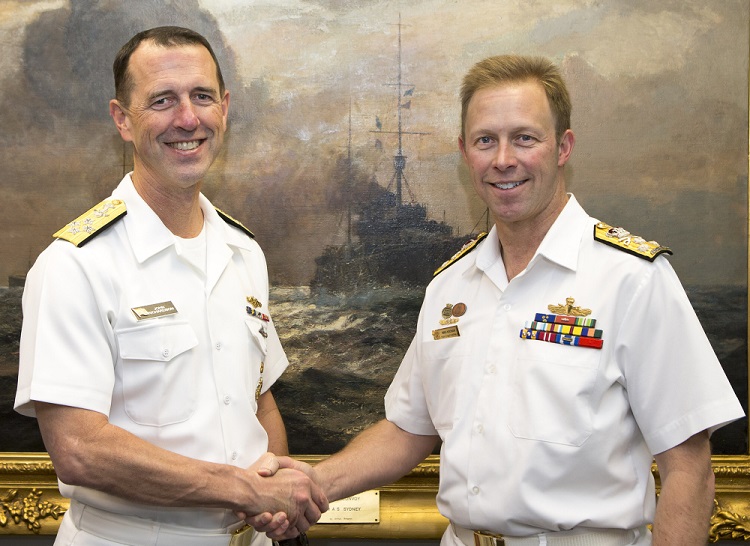 The US Navy’s Chief of Naval Operations (CNO) says Australia’s new Hobart class DDGs was a prime example of just how interoperable the two navies are.

Admiral John Richardson, in Canberra on November 1 for top level talks said there was probably no closer partnership than the US and Australia. “We look forward to make that partnership more interoperable and deeper.”

Admiral Richardson said Australia’s new Hobart class Aegis DDGs were a prime example of just how interoperability the two navies were. “Literally at the very highest end of naval capability integrated together – it doesn’t get any closer than that.

“It takes it up to the very art form of naval manoeuvre, naval operations, naval warfare. It’s a terrific example of that interoperability manifesting itself.”

In Canberra, Admiral Richardson held talks with government and defence leaders and academics. The meetings culminated with a visit to the Australian War Memorial where he laid a wreath on the tomb of the unknown soldier, and at the daily Last Post Ceremony.

“We have had a terrific day, really talking about everything from the strategic level all the way down to the tactical level,” he said. “There is probably no closer partnership that we have particularly as we think about maintaining a free and open Indo-Pacific than between the US Navy and the Royal Australian Navy.”

He said our two nations shared so much. “We are democracies, we are maritime nations. Our navies share a lot in terms of our heritage and our history.

“It builds a foundation of trust that will  allow us to integrate on that entire spectrum of operations from strategic all the way down to tactical.”

Chief of the Australian Navy VADM Mike Noonan said Australia’s relationships with the US was at an all-time high. “We have had great opportunity today to talk about capability cooperation between our two navies, what we have been doing in terms of the future outlook fin terms of regional security.

“We have had a chance to talk about the future as we commission some great new capabilities into the Australian Navy.”

This article was first published by our partner Australian Defence Business Review on November 2, 2018.