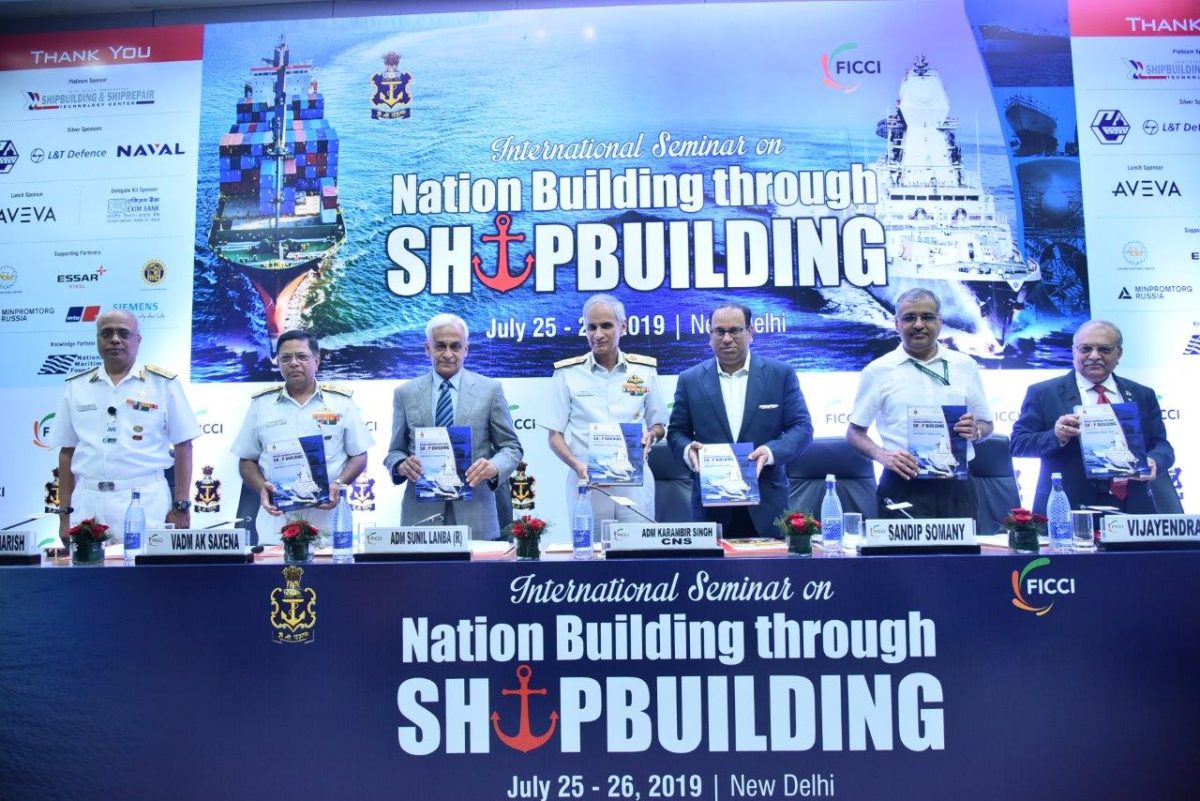 NEW DELHI. Admiral Karambir Singh, Chief of the Naval Staff, Indian Navy today said that there is enough headroom in mercantile marine sector for India to attain the critical mass and become a hub for defence shipbuilding.

Speaking at the ‘International Seminar on Nation Building through Shipbuilding’, organised by FICCI, Admiral Singh said that shipbuilding can contribute immensely to the vision of making India a $5 trillion economy by 2024.

“As India’s shipbuilding industry matures, there is immense potential to forge strategic partnerships and convert India into a hub for defence shipbuilding exports and repairs to friendly foreign countries,” said Admiral Singh.

However, to enable the strategic outcomes, there is a need for the nation to achieve a certain critical mass in indigenous ship production and repair capability, he said.

“While defence shipbuilding plays an important role, we actually need to harness the headroom which is available in sectors such as mercantile marine and coastal shipping to increase capacities and attain our true potential,” Admiral Singh added.

Dwelling on Indian Navy’s shipbuilding initiatives and its linkage to nation building, Admiral Singh said that the navy was fully invested in encouraging the indigenous shipbuilding ecosystem for 50 years before Make in India became a national mission.

“More than 60% of the naval budget is dedicated to capital expenditure and nearly 70% of this capital budget has been spent on indigenous sourcing amounting to nearly Rs 66,000 crore in the last five years. Since the launch of Make in India in 2014, 80% of the AoNs (Acceptance of Necessity) on cost basis have been awarded to Indian vendors. Of the total 51 ships and submarines on order at various shipyards as on date, 49 are being constructed indigenously,” he noted.

He further added, “Nearly, 90% of ship repair by value is undertaken by Indian vendors and mostly MSMEs, implying that in addition to the capital budget a high proportion of navy’s revenue budget is also being ploughed back into the economy.”

“Studies show that labour employed for a given sum of industrial turnover is one of the highest in shipbuilding industry. Besides, the multiplier effect of one worker employed in a shipyard is about 6.4 in ancillary industries,” he said.

Admiral Sunil Lanba, Chairman, National Maritime Foundation (NMF) and former Chief of the Naval Staff said, “We need a comprehensive policy and support which will address all three segments – construction, repair and breaking.”

Mr Vijayendra, Joint Secretary (NS) & CVO/DDP, Department of Defence Production, Ministry of Defence said that the navy has a long-term perspective plan for 2015-30 laying out in detail as to what items will be indigenized by local vendors.

Vice Admiral AK Saxena, Controller of Warship Production and Acquisition, Indian Navy said that the international seminar was very timely as shipbuilding has picked up in India and there was a need to capitalize on the prospects in merchant marine.

Mr Sandip Somany, FICCI President said, “A vibrant shipbuilding industry has contributed to the economy and security of most great powers since it directly impacts national GDP, generates demand both in the upstream and downstream sectors of the economy.”

Mr JD Patil, Whole Time Director and Member of the Board, Larsen & Toubro Ltd and Chairman, FICCI Defence Committee said that more and more countries are putting greater money in their navies as against on the land, and that shipbuilding had a bright future in India.

A compendium of technical papers was released by Navy Chief Admiral Singh at the inaugural session of the two-day conference.