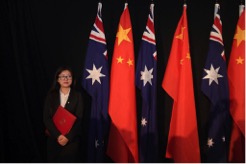 The comfortable Canberra consensus on how to handle China has boiled over.

A set of simmering debates has become extremely hot.

Australia was long able to keep its economic relationship with China in the prosperity pot, separate from strategic and alliance interests in the pot marked power. Now there’s much heat in the kitchen.

One of our sharpest strategic thinkers, Rod Lyon, remarks on the ‘surprising degree of unanimity’ that marked the consensus in the 1990s and 2000s: ‘China’s rise offered a grand set of economic benefits to Australia at relatively low strategic risk. China was thought unlikely to disrupt the peaceful regional order that underpinned its own development. And a richer China would probably also be more politically pluralistic.’

In the 11 years to 2007 that John Howard was prime minister, his government basked in the consensus sweet spot as both pots gently simmered. Howard was able to embrace the economic riches China offered Australia, and even nod to China’s expanding ‘prerogatives’, because of his deep confidence in US might.

Howard’s description of keeping the two pots separate is ‘the great duality’, saying his foreign policy achievement was to strengthen the US alliance while building an ever-closer economic relationship with China.

And ever closer it keeps getting. The China prosperity pot is huge and tasty, accounting for nearly a third of Australia’s exports and around a fifth of our imports.

Australia is described as ‘the most China-dependent country in the developed world’.

That’s now discussed as a vulnerability, not the blessing that sailed Australia through the global financial crisis and the great recessionwithout a blip.

The heat in the kitchen explains why the era when Canberra talked so optimistically of the Asian century has faded. Howard’s great duality has lost its symmetry and balance.

As the 21st century arrived, those who stir the power pot began questioning the comforts of the Canberra consensus. Chart the change through the seven defence white papers published from 1976 to 2016.

The country references always put the US in top spot (except in the post–Vietnam War 1976 white paper, when Australia was more worried about the Soviet Union and Indonesia).

Through the final quarter of the 20th century, Australia’s strategists were relatively positive about China—when they bothered to consider it. In the seminal 1987 defence of Australia white paper, China got four mentions (two of them on maps).

The 2000 white paper was when Australia stepped beyond three decades of optimism to consider the possibility of clash rather than cooperation. China’s relationship with the other big players was ‘the most critical issue for the security of the Asia Pacific’. Australia began to think beyond fighting Indonesia to contemplate confrontation with China. Such planning was pushed to the back of the stove by the 9/11 decade: Australia turned its attention to jihadists and Afghanistan and Iraq.

By the 2009 white paper, though, Canberra had to confront the conflicts in the consensus. The document was a not-so-polite rendering of Prime Minister Kevin Rudd’s private description of himself as ‘a brutal realist on China’.

For the first time, China got more mentions than Indonesia, taking second spot behind the US.

As Rudd later wrote: ‘The core conclusions of the 2009 Defence White Paper had been the need to recognise that China’s rapidly increasing military budget and its increased naval activity in the South China Sea represented major changes in Australia’s wider strategic circumstances.’

The US would stay ‘the most powerful strategic actor’ as China and India got richer, while Australia’s strategic landscape would become more crowded and complex: ‘A degree of competition is inevitable as Asia’s strategic order changes. But all countries in the region have a deep investment in stability and economic growth: the complex interdependencies and growing bilateral engagement are strong stabilising forces.’

Rudd’s PM memoirs dismiss the Asian century paper as ‘naïve’ and scorn Gillard’s 2013 defence white paper for trying to ‘gut’ his build-up of Australia’s military: ‘Instead of hard strategic logic, it chose to play Pollyanna: don’t worry, be happy, and everything will be alright in the morning.’

And, indeed, Pollyanna has departed the kitchen.

During Malcolm Turnbull’s leadership, Australia felt an icy blast from China. Turnbull described China as a ‘frenemy’and in his major Asian speech offered a ‘dark view’ of a ‘coercive China’ seeking regional domination.

We now understand that China touches most dimensions of Australian life: security, economics and trade, social, diplomatic and political.

The pragmatism that separated the prosperity pot and the power pot isn’t enough.

A trade war brews on one side of the stove, matching the fear of war on the other.

China is so important in so many ways that Australia’s values are being stirred into the soup.

The consensus has gone to confusion.