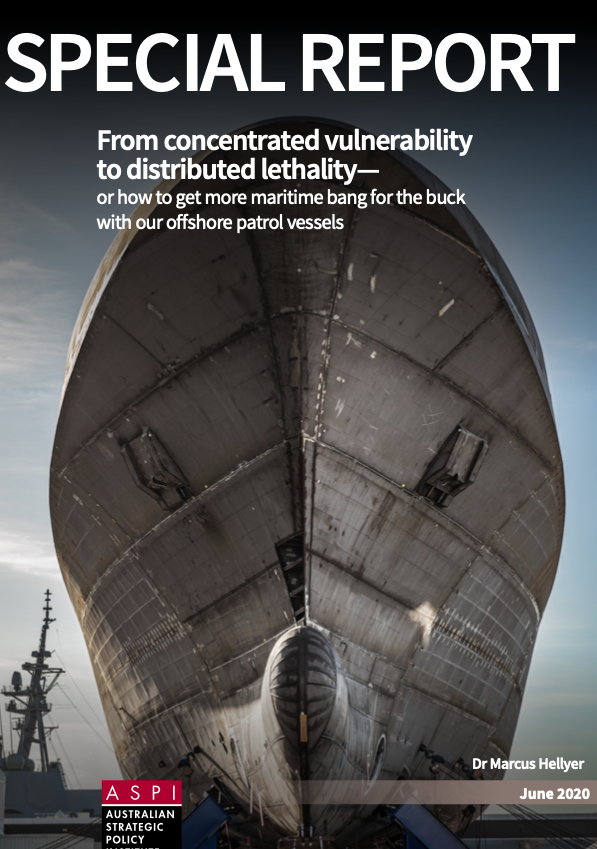 We recently published our assessment of the new build Australian OPV based on site visits and interviews with the principal players in shaping the new class of ships.

The Arafura Class Offshore Patrol Vessel is the first of the new build platforms in the reshaping of Australian shipbuilding and integrated mission systems operations.

It provides the template with regard to the entire reset of how the Australians are seeking to build out their integrated distributed force.

The contours of the new template are in place and can be identified and this report provides an initial identification and assessment of the new approach.

The new build OPV is not just a new platform; it is the spearhead of a new approach. And that approach as well as the OPV template is the focus of this report.

After our report was published, ASPI’s Dr. Marcus Hellyer generated an interesting  report which looked at ways, the new build ship might be used in expanding the lethality and situational awareness of the maritime force by finding innovative ways to use the new build ship.

In an article published by ASPI on June 3, 2020, Hellyer provided an overview of his report and an envisaged way ahead for the ADF in leveraging the new platform.

My new ASPI report, From concentrated vulnerability to distributed lethality—or how to get more maritime bang for the buck with our offshore patrol vessels, released today, sets out how to deliver substantial new maritime capability in the next few years and introduce a transformative force structure for the price of one or two traditional large multi-role ships.

This would address key challenges faced by the Australian Defence Force by enabling it to transition more quickly to a force structure that better supports operating concepts that employ distributed lethality and greater use of autonomous systems and human–machine teaming.

Two things have become clear so far in the Covid-19 crisis. The first is that the competition between the US and China will continue to intensify. The Chinese Communist Party has become more emboldened and likely to disrupt the regional order. The willingness and the ability of the US to preserve the existing order is even more in question. This has implications for regional stability and consequently for Australia’s security.

Even before Covid-19 struck, the government indicated that its current defence force structure plan needed revision to meet our increasing strategic risk. It will need to acquire greater self-reliant capability sooner than the existing investment plan delivers.

Second, countries have recognised that the decline of indigenous industrial capability and excessive reliance on global supply chains for essential commodities are vulnerabilities. The government has suggested that to address this it will seek to rebuild Australian manufacturing. It had already begun to do this in the defence sector through the implementation of its 2016 defence industry policy statement, but further rapid investment in defence-sector manufacturing could promote recovery from the economic impact of Covid-19 (as well as being in our strategic interests).

The government’s announcement of the construction of six new Cape-class patrol boats that weren’t part of Defence’s integrated investment program would appear to be a clear statement of its intent.

Despite the size of the government’s $200-billion defence investment program, that plan isn’t well placed to respond to either of those challenges. Core planks of the investment program are still several years away from starting construction, and some that are delivering now are sending most of their dollars offshore. Consequently, the current plan offers few opportunities for large stimulus spending.

Moreover, with delivery of the three Hobart-class destroyers now complete, the plan won’t deliver any new combat vessels for a decade. Despite the growth of submarine numbers in our region, the plan doesn’t provide a new submarine until 2034. It doesn’t provide another surface combatant equipped with a towed sonar array until 2030. Despite China now outbuilding the US Navy in surface combatants, the plan doesn’t get any new missile-equipped ships to sea until 2030.

Even then, the new frigates will essentially replace existing ones on a one-for-one basis and the submarine fleet likely won’t increase in raw numbers until the 2040s. The problem is not just in ships and submarines, but in other systems; there are no weaponised drones in the navy’s investment plan, for example.

With that $200-billion war chest, Defence should be striving to deliver more warfighting capability sooner. It can do so while also delivering economic stimulus.

Defence is currently acquiring 12 offshore patrol vessels (OPVs) to perform constabulary and border-protection tasks. These vessels have considerable inherent potential to contribute to warfighting across the navy’s operations.

Their flexible design means these vessels can be modified to deliver a range of variants optimised for roles such as anti-submarine warfare, anti-surface maritime strike, autonomous and unmanned systems support, offensive and defensive mine warfare, air warfare, light amphibious operations, and special forces support.

The report proposes an accelerated acquisition of a larger number of OPVs—indicatively, 18 rather than the current 12 (not counting any potential mine-warfare variants)—that would be enhanced and optimised for different roles.

The key is to resist the temptation to turn each OPV into a multi-role vessel that attempts to do everything. That path will result only in exponentially spiralling cost, schedule and risk. Rather, each variant would seek to do a small number of things well.

Only low-risk modifications would be conducted, preferably using systems already in Australian service, such as CEA Technologies’ phased-array radar. To avoid disrupting the build program, early vessels would be delivered without enhancements and modified later.

The OPVs would not operate alone, but in artificial-intelligence-enabled teams that would form and reform as needed to provide the commander with many options while confusing and disrupting the adversary. The teams would consist of not only the OPVs and the autonomous systems they deploy, but also traditional platforms such as frigates, destroyers and submarines, combat and maritime patrol aircraft, and even land forces.

Due to their relative simplicity, additional OPVs could be built quickly at Civmec’s state-of-the-art facility at Henderson in Western Australia. This wouldn’t compete for workforce or skills with the frigate and submarine programs based in South Australia. The construction of extra OPVs would also provide a boost to suppliers across Australia.

Moreover, the technologies that enable distributed lethality should be sourced as much as possible from Australia’s emerging high-tech defence industries, accelerating the progress already made under the government’s defence industry policy.

Our report can be read here: