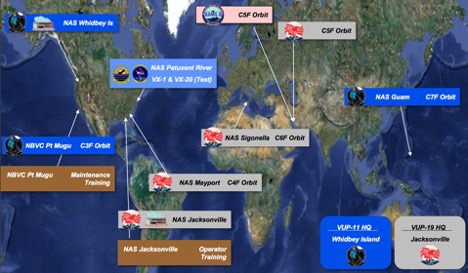 Recently, I visited Jacksonville Navy and Mayport and had a chance to talk with the P-8, Triton and Seahawk teams working the way ahead with regard to ISR, ASW and third-party targeting.

It is clear that significant innovation is underway within this community writ large.

In the coming weeks as I work through the material generated from the visit, the nature of the innovative approaches being crafted will be highlighted.

Understanding of how the C2/ISR infrastructure is being reworked to empower a force able to operate in both a distributed and integrated manner is clearly a key way ahead.

It also clear, that innovation will be further generated by shaping greater capabilities to work interactive kill webs and clusters of innovation among those platforms able to shape a collaborative sensor-shooter collaborative concept of operations.

For example, rather than thinking of the P-8 as the P-3 which “fought alone and unafraid,” the combat cluster which the P-8 can operate with to deliver maximum combat effect could  become a more focused effort of collaborative concepts of operations and interactive modernizations.

P-8 modernization could be shaped in terms of how collaborative capabilities with the Romeo helicopter or the Fire Scout could become a key focus of attention, rather than focusing on single platform or even a global fleet upgrades of the same aircraft modernization.

As the P-3 replacement and then sunsetting was considered, the core pairing envisaged was between P-8 and Triton. That pairing would see Triton do the wide area sweep and allow the P-8 to focus on specifically identified targets for further assessment and prosecution.

But what such a pairing concept clearly does not focus on is the question of what Triton is ultimately really about and what it could contribute.

A better way to think of Triton is to see it as pioneering a whole new level of the kill web, one which provides wide area situational awareness and support to one of the most difficult challenges facing both the USAF and the US Navy, namely dynamic targeting of an adversaries maritime force.

Triton is pioneering a whole new level of the kill web, one which can deliver to the distributed combat force ISR data appropriate to support dynamic targeting and the C2 to enable it,

The focus should be less on the airplane than what is on the airplane and how to build an ISR infrastructure which can actually use the dynamic data generated by the airplane or airplanes working the orbital concepts of operations which the aircraft empowers.

For full value to be derived from the Triton fleet, a kill web mentality will have to replace what has been a sortie generation mentality for the carrier fleet.

It is about building in an orbit-enabled concept of operations, rather than thinking of the aircraft in sortie-generation concepts of operations.

What this means is that for the Navy to get full value out of its Triton force it needs to think significantly beyond a dyad approach.

It means embracing what a high altitude remotely piloted vehicle with a sensor package which can help build a common operational picture generated by orbits can provide for a kill web strike force, which may well operate within a sortie-generated concept of operations, which the orbiting high altitude asset will provide.

With a four ship 24/7 coverage of the area where you will operate or wish to operate, the Triton can provide domain knowledge crucial to informing both the threat and opportunity calculus in an area of operations.

And because the orbit is not about sorting into a specific area, one can sort through where the best advantages might lie for the projection of force without tipping your hand by having to fly to a specific tactical area.

This is a work in progress, but it is a new capability which if fully embraced provides significant warfighting advantages to the United States and its allies.

But for those advantages to be realized, appropriate training, and operational approaches need to be shaped, executed and evolved over time.

In an article by Sam LaGrone of USNI News published on April 10, 2018, “the pair of 131-ft wingspan UAVs built by Northrop Grumman for intelligence, surveillance and reconnaissance missions will deploy with an early set of capabilities designed for maritime ISR and will grow to include a signals intelligence function in 2021, Triton program manager Capt. Dan Mackin said in a briefing at the Navy League’s Sea Air Space 2018 exposition.”

“Part of the IOC process will include adding a top secret “multi-intelligence” function to1 Triton that will eventually replace the Navy’s Lockheed Martin EP-3E Aries II manned signals intelligence platforms. Congress mandated the Navy retire the EP-3E Aries II only after it had found a way to field a similar capability.

“Eventually, the Triton program will consist of five four-aircraft orbits around the world. The operators will reside in the two main bases at Mayport and Whidbey Island.

“The system is made up of an aircraft and a main operating base where the warfighter starts taking that data over wideband SATCOM link you start assimilating that data, put that data together to understand the [maritime picture],” Mackin said.

“The Navy will have five operating bases where the aircraft will be maintained, launched and recovered. The forward bases will be at Naval Air Station Sigonella, Italy; an unspecified location in the Middle East; Naval Air Station Guam; Mayport; and Point Mugu.”

In that article, there was a snapshot of a NAVAIR representation of the envisaged Orbit engagement of the Triton which can be seen in the featured graphic above.

It is clear that the ISR or data management infrastructure for the new layer of the kill web which Triton can deliver is not fully developed.

What Triton has generated as a disruptive technology is the need for a different approach to how data is stored from an orbit concept of operations, how that data gets transmitted and how that data enters into the data bases which inform fleet operational decisions.

While almost the entire defense press has focused on the airplane and its operational capabilities and its challenges, the core point is that the focus needs to shift.

It needs to be upon the shaping of new network management, protocols and wave form transmission capabilities. These capabilities would allow the Triton to generate a whole new layer for the kill web, which is central to fleet operations and to shared dynamic targeting with the USAF as the USAF reshapes its role in maritime missions as well.

And as the ISR/C2 side is reworked, reshaped and recrafted, one can then reshape the payload carried by the Triton which can then provide for further kill web empowerment capabilities going forward.

For example, enhancing the current TRITON payload with Advanced Tactical Data Links (ATDL) and a JADC2 gateway (universal translator) would provide the resilient communications necessary to participate in the denied environment by providing the capability to utilize directional links or multiple SATCOM or line of sight radio links as allowed by the tactical environment.

By following a Naval Operational Architecture (NOA) TRITON would interface with the larger Joint All Domain Command and Control (JADC2) network and be able to relay Air Force and National Technical messages throughout the Navy Network.

In short, Triton is a work in progress, but it is plankholder in shaping a new way ahead for dynamic targeting empowered by interactive kill webs.