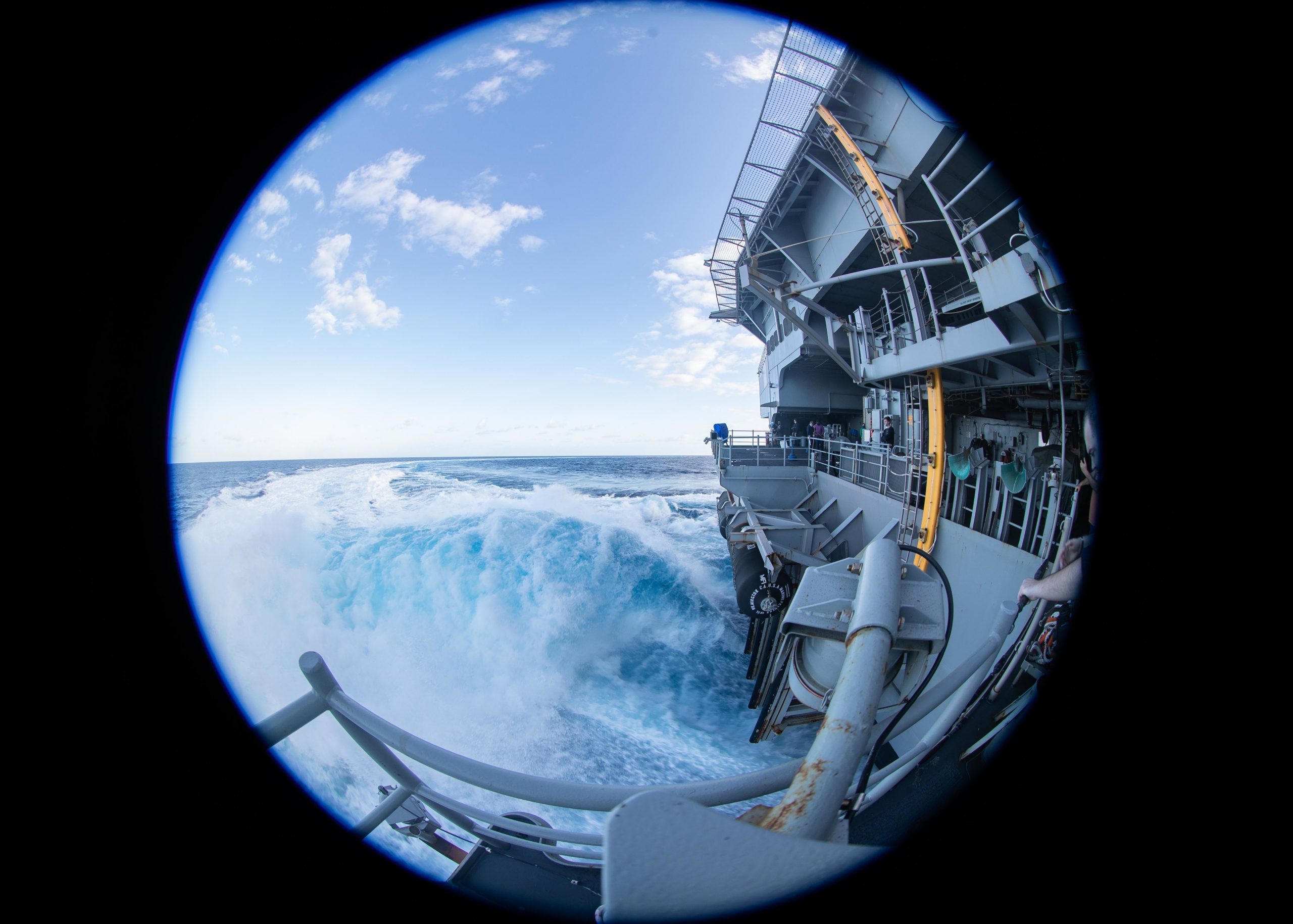 The USS Gerald R. Ford (CVN 78) can be viewed as a key infrastructure piece in the reshaping of air-maritime combat capabilities, and not just for the US Navy.

From this perspective, my visit to the USS Gerald R. Ford (CVN 78) on October 9th, 2020  allowed me to focus on three key elements of the ship which provide for new combat infrastructure: weapons workflow, deck workflow and C2/ISR mission management.

In this article, I will focus on the weapons workflow, and its impact on sortie generation rates.

But I will discuss as well how the approach enabled by the USS Gerald R. Ford infrastructure delivers more than much higher sortie generation rates, as important as that is.

But before I discuss the combat outcomes, let me address what I mean by the weapons workflow.

As we toured the ship and focused on the key elements which allowed for a very different weapons workflow from the Nimitz class carriers, we had a chance to discuss not only that workflow but its intersection and impact with other key developments for the USS Gerald R. Ford in the context of the evolving combat force.

There are several elements of the workflow shift for weapons.

On a Nimitz class carrier, there is a “weapons farm” on the ship’s flight deck from which weapons are worked for assembly and worked with components brought from various levels of the ship and then transported by a hydraulic system which pulls the elevator up with wires and ropes. The weapons need to be moved through one of the two mess decks before being transported on deck.

This process changes onboard the USS Gerald R. Ford.

Below the flight deck are two very large weapons assembly and loading areas, where the weapons are prepared to be transported to the flight deck for loading onto the aircraft. These two large areas allow the ordinance team to prepare weapons of various complexity out of the weather, which makes the process much more rapid and safer.

And it is clear when one stands in these “weapons handling transfer areas,” that the ship will be able to accommodate the various new weapons which during its lifecycle which will be developed, built and delivered to the US Navy.

In other words, it is better now for today’s arsenal and has significant capability to support the weapons revolution underway.

It is also clear, that the new carrier will be able to operate with significant capabilities to support multi-mission operations.

There is enhanced capability for the crew to build diverse weapons packages below deck and then to transport them rapidly to the flight deck for loading. This will give the ship the ability to mix and match flight strike packages or even ISR packages much more rapidly.

As Rear Adm. Clapperton put it: “We can move more weapons in a safer way, a faster way to a flight deck that is larger and more flexible.

“And that all contributes to the kind of agility, lethality, and flexibility the Ford brings to the fight.”

A key outcome of the new weapons workflow is significant increases in sortie generation rates.

The Ford’s Ordnance Handling Officer, Lt. Cmdr. Paul Castillo highlighted the importance of moving from a weapons farm centered weapons generation workflow to operating from two areas below the flight deck for complete assembly of weapons.

This means that these weapons can then be loaded directly on to the new weapons elevators and delivered to the flight deck for immediate loading on the combat aircraft.

According to Lt. Cmdr. Castillo: “We have reduced time significantly from the time we build the bomb to the time we put it onto the combat aircraft. We have four flight elevators to the flight deck and this allows us to do it much more safely as well.”

Capt.. J.J. Cummings added that the NASCAR loading approach which was highlighted the last time we visited the USS Gerald R. Ford in 2015 was facilitated by the weapons workflow we were discussing.

“We have a significant increased ability to get the aircraft launched off the flight deck fully loaded with ordnance appropriate to the mission.”

This workflow and the other modifications for flight deck operations are changing how the metrics for USS Ford versus USS Nimitz performance should be measured.

As Rear Adm. Clapperton put it: “We are working with Carrier Strike Group Four, the group which certifies when a strike group is ready for deployment.

“We are  working with them to determine realistic and reasonable measures applicable to Ford versus Nimitz class.

“What are the metrics for launch and recovery, for ordnance delivery, for sortie generation, and weapons employment that we are going to use for a Ford class carrier versus a Nimitz class carrier?”

He also added a key point with regard to speed to deliver of multi-mission impact: “Clearly, we can more rapidly support multiple options, from ASW, to fleet defense, to surface warfare, to information warfare or air to ground.

I would call this a speed to deployment metric as well as speed to reconfigure for mission packages metric, both of which are facilitated by the new weapons workflow as well as the deck operations workflow on the USS Ford.

For me, what the USS Gerald R. Ford class will enable is a much more rapid speed to deployment and to do so with an ability to arm the aircraft for a wide range of missions.

One of the points I will make in a later piece is that as the integrated distributed force evolves and the capability to operate in and to empower multiple kill webs widens, a key capability for the large deck carrier will be to be able to support multiple kill webs from its integratable air wing.

In a discussion I had earlier this year with a navy analyst we discussed this approach.

“Because of the sensor and communications technologies and the weapons evolution, the chessboard is bigger, and the large deck carrier is feeding into the interactive kill webs through which we operate on that chessboard.

“The numbered fleet becomes the command and control node, which is why we are seeing the numbered fleets standing up maritime operations centers that we did not have before. The size of the chessboard is enlarging significantly, with kill webs, that can stretch for thousands of miles, when you add in things like Triton or satellites.”

In other words, the large deck carrier and its partnered assets are moving beyond a focus simply on its proximate operating area to supporting a larger region, to be understood in terms of the size of the numbered fleet.

It is very clear that the USS Ford will provide very effective infrastructure for such an approach.