The Royal Air Force is receiving its first P-8 later this year.

And the operational base for the P-8 will be located at RAF Lossiemouth, which has required a significant rebuilding effort.

A recent UK Ministry of Defence story highlighted the latest phase in construction.

The site will be the future home to the country’s nine-strong, new P-8A Poseidon MPA fleet. The aircraft’s key role will be to protect the UK’s submarine-deployed nuclear deterrent and its two new aircraft carriers, whilst it can also deploy missiles capable of destroying enemy submarines beneath the sea.

The aircraft will work alongside eight cutting-edge new Type 26 warfare frigates – which also have their roots firmly in Scotland, where they are being built at BAE Systems’ yard in Govan. Later today the Defence Secretary will visit the shipyard to view the first completed unit of the new anti-submarine warship, HMS Glasgow, in the shipbuilding hall where it is being connected to the second unit and will be joined by others as the ship takes shape.

The MOD is investing £3 billion over the next decade in its Maritime Patrol Aircraft capability, and last year confirmed £3.7bn to start building the first three of eight Royal Navy Type 26 frigates on the Clyde as it continues to boost its capabilities. 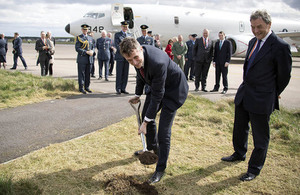 Defence Secretary Gavin Williamson:“These submarine hunters will play a vital role in keeping the UK safe from the increasing threats and aggression we face in the skies, on the sea and below the waves.

“This massive investment demonstrates the huge contribution Scotland makes to protecting Britain and how defence generates prosperity and opportunity.

“Moray is benefitting from 200 local construction jobs during this building phase, with the number of personnel employed at RAF Lossiemouth growing by 470 to 2,200 people when this is complete.”

The news comes at a time when the Defence Secretary has warned that Russian submarine activity has increased ‘ten-fold’ in the North Atlantic sea.

Together the aircraft and ships will protect the UK’s submarine-deployed nuclear deterrent and its two new aircraft carriers. In addition to boosting the UK’s surveillance capabilities, they are both designed to conduct anti-submarine and anti-surface warfare, search and rescue and to conduct intelligence gathering.

The new Lossiemouth facility will be completed in 2020, to coincide with initial operating capability of the Poseidon aircraft being available in the UK. Built by Elgin-based Robertson Northern, it will comprise a tactical operations centre, an operational conversion unit, squadron accommodation, training and simulation facilities and a three-bay aircraft hangar.

At the peak of construction, the project will support 200 local jobs. When the fleet is fully operational, some 470 additional personnel will be based at RAF Lossiemouth, taking the total number of people employed there to 2,200. Further roles are also expected when the training and support services are established at the new facility.

In addition to that, the Type 26 frigate programme will sustain 1,700 BAE Systems jobs in Scotland, safeguarding a total of 4,000 jobs across the wider UK supply chain until 2035. The next generation highly capable and versatile multi-mission warship designed to support anti-submarine warfare, air defence and general purpose operations anywhere on the world.

During a visit to RAF Lossiemouth last year, we had a chance to talk with two of the senior officers working the P-8 stand up at the base.

The article was first published on 2017-07-12  and excerpts from that interview follows:

For RAF Lossiemouth, there is a big rebuilding project underway which involves P-8s and shaping the main operating base for the aircraft at Lossie.

During the discussion, Squadron Leader McDonald went to the walls of her office and began pointing at her various and diverse base maps to explain how the base was being reconfigured.

The big change on the way is building a new P-8 facility outside of the existing operating base.

This was challenge in part because of the need to dig deep and to secure the hangers and other facilities.

Lossie is facing the North Sea, so getting to bedrock is not easy.

The location though of the base is excellent from an operational point of view as Wing Commander Allen explained: “The transit time to the area of interest is much better from Lossie as opposed to say Waddington.

“We are talking approximately 1 and ½ hour’s savings of time to the areas of interest.

“That is significant in terms of giving us an operational advantage.”

The first challenge is constructing new facilities for the new Typhoon squadron.

“We compared the option of simply refurbishing old Tornado facilitates or building new ones.

“It makes more sense to build new ones given the age and condition of the legacy buildings.

“So we are building the new site on the location of a Tornado engineering facility.

“The new building will provide better support to Typhoon.”

The second challenge is building the P-8 facility with its very large hangers and support facilities.

The RAF is getting two hangars for the P-8 and Boeing is building one for servicing UK and other P-8 aircraft in the region.

According to Wing Commander Allen, “the hangars will be very large and be able to hold three P-8s at a time.

“The size of the hangar is 265 meters by 100 meters and will stand four stories up.

“The hangers will house the support capabilities, such as the training center.

“Behind the main operating hangars will be the engineering support facility.” Boeing is investing in the base as well.

According to a 2016 BBC story: “Boeing has confirmed it will invest about £100m in an operational support and training base at RAF Lossiemouth, creating more than 100 new jobs.

The move is part of a deal struck between Boeing and the UK government.”

In addition to housing for the UK needs, the US Navy will operate there as well and the Norwegians will train at the base.

And according to Wing Commander Allen, they are looking to other P-8s users to come to the base as well, notably the Australians.

Allen commented with regard to the Norwegians:

“We have talked about sharing of facilities with Norway because they were getting P-8 and we’re looking at the same piece of water.

“Its just a question of working out how we can share facilities in an effective manner going forward.”

When one flies into Aberdeen, it is hard to miss the significant Norwegian presence in the North Sea oil business.

In effect, the commercial side of the house has preceded what one might well see on the military side.

The twin transformation – a major one for P-8 and an upgrade for Typhoon – means that other facilities will be modernized as well.

In addition to runway servicing, a new control tower will be built on a new location on the base.  The location selected provides a better view of the overall operating base emerging at Lossie compared the legacy air tower.

Collocated with the new air control tower will be a new fire station to handle emergencies.

As Squadron Leader Macdonald noted: “We also need an upgraded fire station too because the Crash CAT will rise up to Crash CAT seven for P-8 –  because of the crew numbers on the aircraft.” “The challenge is how will we handle the huge amount of data being generated by our P-8 force let alone by the other P-8s operating in the area?

“How to identify rapidly what is most relevant to whom in the operational space?”

And that leads as well to another infrastructure challenge – power supplies and information and communication cabling.

This is not the most visible or sexy part of an infrastructure discussion but it is central to a 21st century base, notably as information rich aircraft are added to the fleet.

The challenge will be to deal with the old and the new when sorting through a cabling and power architecture that can support a 21st century fleet….

The featured photo shows the P-8 flying at the Farnbourgh Air Show in 2014.