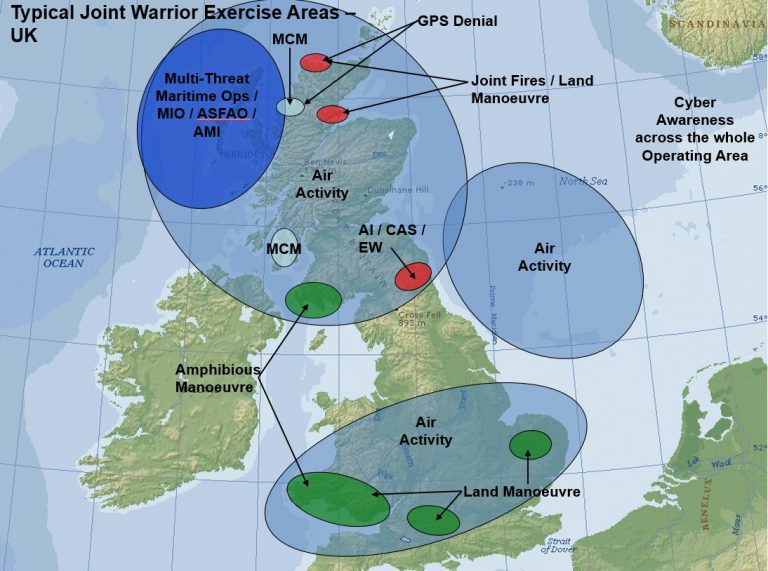 Working air, ground, maritime and space platforms and tools to achieve common operational objectives is not in the DNA of the services.

To shape a multi-domain DNA going forward, the various national services and their allied partners are pursuing training programs and exercises to learn how best to command such a force and to execute operational success in multi-domain environments.

A UK led exercise is being transformed along these lines to work with NATO partners to learn how best to operate in and prevail against various adversaries in a multi-domain operation.

According to a recent UK Ministry of Defence story published on April 20, 2018, this year’s Joint Warrior Exercise was highlighted as an important step ahead.

More than 11,600 military personnel from 17 nations will take part in Exercise Joint Warrior for two weeks this spring in one of the largest exercises of its kind in Europe, operating out of Her Majesty’s Naval Base (HMNB) Clyde, Scotland.

“Joint Warrior prepares our troops in the best way to meet the intensifying threats our country faces by providing a major opportunity to exercise with our allies.

“Our Armed Forces are the face of global Britain, and training side by side with troops from 16 other nations means we are stronger and more capable when it comes to keeping our countries safe and protecting our way of life.”

The bi-annual exercise is running from the 21st April to 4th May, and incorporates all three UK services as well as forces from 16 other nations including Denmark, Estonia, Latvia, Lithuania, the Netherlands, Spain, Sweden, and the US.

The exercise will provide NATO allies and partner nations the opportunity to train together across air, land, sea and cyber domains, practicing “high-end” war-fighting between near-peer adversaries.

This exercise gives the UK participants a chance to train with our allies and partners, honing our skills and developing our tactics. It is hugely important in making sure that we can fuse all elements of our capabilities, enhancing our ability to conduct joint operations now and in the future.

It will culminate on Salisbury Plain Training Area on the 3rd May in which JEF forces, including troops from the UK Parachute Regiment, the Danish Jutland Dragoon Regiment, the Lithuanian “Iron Wolf” Brigade and the Latvian Mechanised Infantry Brigade, will conduct urban combat operations with air support provided by Apaches, Chinooks, Wildcats and Tornados

The website NAVALTODAY.com provided additional details on the exercise.

The exercise will be attended by 16 nations who will take part in a range of maneuvers over a course of two weeks.

Before the actual at sea maneuvers start, the participating vessels will pull into Glasgow, Scotland, for the weekend where the harbor-phase of the naval portion of the exercise is to take place. Navies from Denmark, Norway, Canada, Germany, Turkey, Spain, Belgium and the Netherlands are taking part.

The biannual exercise Joint Warrior is linked directly with the NATO Military Training Exercise Programme and is designed, planned and delivered by the Joint Tactical Exercise Planning Staff (JTEPS) based at Northwood in London.

The exercise runs through a range of scenarios, including crisis and conflict situations, that could be realistically encountered in operations – disputed territory, terrorist activity, piracy and more.

The exercise usually takes place in the spring and autumn, but 2018 will see only one edition of the exercise. The autumn session is being replaced this year by a larger exercise in Norway.

Joint Warrior is likely to be attended by one or more submarines but their movements mostly remain undisclosed which means no official announcements on submarine units have been made.

In visits to RAF Lossiemouth 2016 and 2017, we discussed the evolving Joint Warrior exercise approach with RAF reserve officers planning the 2016 and 2017 exercises and those perspctives can be found here:

The broad point is that the exercise has evolved from being solely and air-maritime exercise, to one which involves ground assets as well and working the information thread which will become increasingly significantly as new data rich aircraft enter the NATO forces in the period ahead, such as P-8 and Triton.

And this challenge was discussed during the 2017 visit.

“Certainly, a key challenge is C2 which becomes less top down with operators better placed for better information concerning what is happening in the area of interest.

“With the nature of the information flow enabled by the new platforms, the crew room becomes more important to mission success.

“How do we adjust to this?”

It was pointed out that one legacy from the allied cooperation in Afghanistan which needs to be taken forward is successful sharing of tactical information.

How to adapt this habit or practice into the higher end fight?

“A wider P-8 community will operate in the North Atlantic.

“How we leverage this opportunity?”