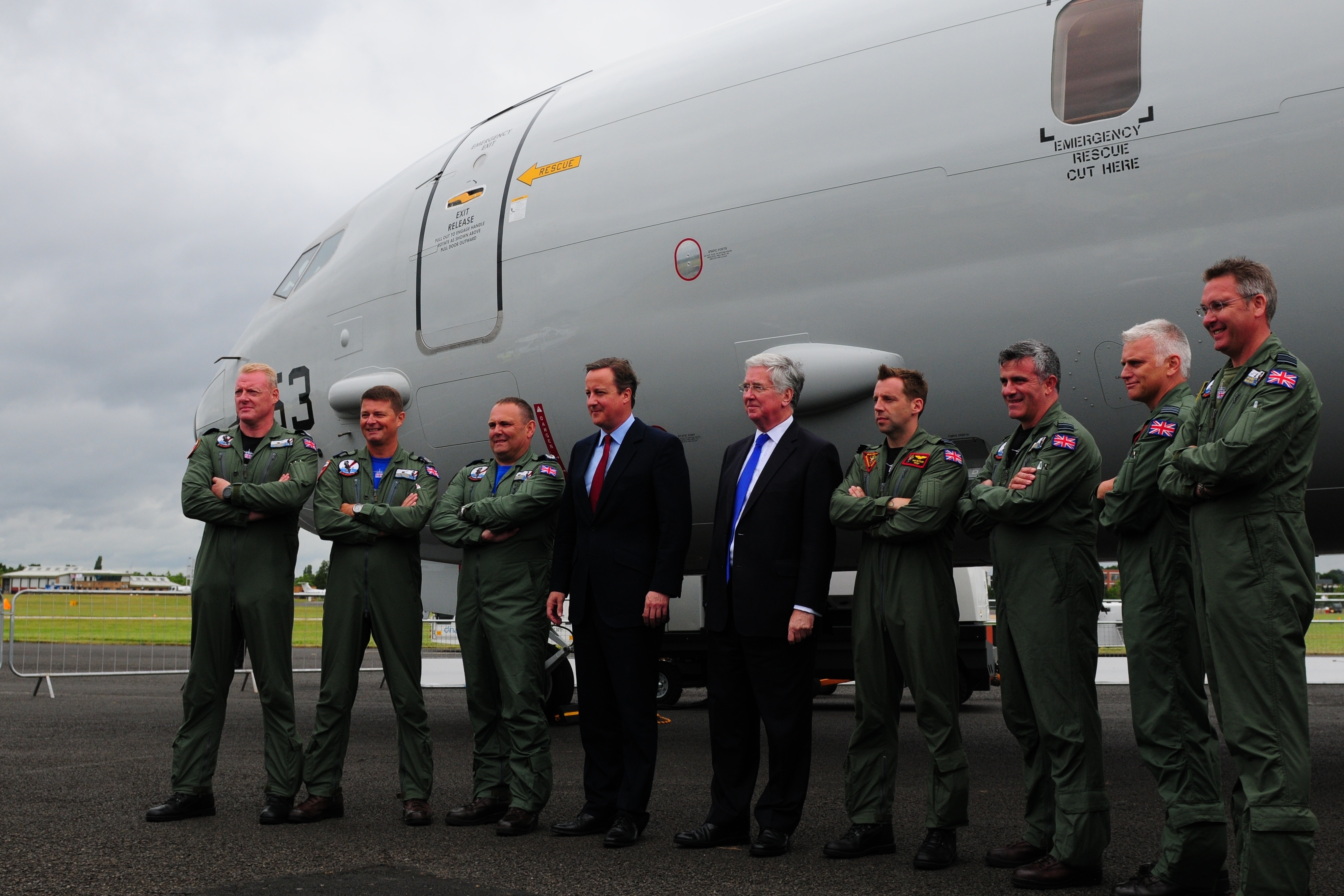 I have spent last week in Norway and visited Bodø air base as well as Ørland airbase, home of the first F-35s in Norway.

This week I visited RAF Marham, the Tornado and F-35 base, and RAF Conigsby, a QRA and Typhoon base and then yesterday Portsmouth to see the new Queen Elizabeth carrier and to discuss the way ahead with senior officials involved with building the carrier and getting it ready for coming to the US for F-35 integration trials later this year.

The last couple of years I visited RAF Lossiemouth and saw the preparations for ramping up Typhoon deployments as well as preparing for the coming of the P-8.

I have argued that the transformation of Nordic defense occurring in response to the Russian threats and challenges was creating not only greater cohesion on the Nordic side but a strategic opportunity for Britain as it sorts out its post-Brexit defense policy.

Certainly, flying the same new aircraft, namely the F-35 as well as the P-8, while at the same time building out its Typhoon fleet with other continental partners, provides a strategic tissue to work through the post-Brexit challenges.

Yesterday, the UK Ministry of Defence highlighted one aspect of the deepening relationship on the Northern Tier.

The UK and Norway advanced their plans for international Maritime Patrol Aircraft (MPA) co-operation in the North Atlantic, as the nations’ defence ministers flew in an American P-8A Poseidon from RAF Lossiemouth today.

Defence Minister Guto Bebb hosted Secretary Tone Skogen, State Secretary in Norway’s Ministry of Defence, on her visit aboard a US Navy P-8A Poseidon aircraft – equipment which both the UK and Norway will soon own themselves.

The allies ramped up discussions around how the nations will work together and might deploy their submarine-hunting aircraft fleet in the future. Areas of co-operation could range from maintenance to training and operations, which would not only cut costs but also boost operational power in the North Atlantic, a key area of submarine activity.

The aircraft took off from RAF Lossiemouth, which will be the future home of the UK’s fleet. Investing £3 billion in the capability over the next decade, the UK is buying nine of the Boeing-built aircraft, whilst Norway are getting five.

Their key role for the UK will be to protect the country’s submarine-based nuclear deterrent and its two new aircraft carriers – the Poseidons deploy sonobuoys to help them detect submarines, and can fire anti-ship missiles and launch torpedoes to destroy submarines.

“These sub-hunters will take to the skies from RAF Lossiemouth and help us combat a range of intensifying threats, not least increasing submarine activity in the North Atlantic.

“We’re investing £3bn in our own capability, but working alongside Norway takes this to a higher level. Not only could we cut costs by sharing training, spares and repair facilities, but we can patrol the seas together, meaning we’ve got more eyes and ears on any potential aggressors.”

“Norway and the UK are natural partners given our shared values, as well as our history and geography. We can even further strengthen bilateral defence cooperation related to high-end capabilities such as the F-35 fighter and the P-8 maritime patrol aircraft.”

“In my discussions with Guto Bebb, Minister for Defence Procurement, I find a like-minded ally. The UK and Norway continue to stand together in training and exercises in the North Atlantic and the Northern region, as well as operationalisation of the Joint Expeditionary Force.”

The nine P-8A Poseidons will be based at RAF Lossiemouth in Scotland. Last month, Defence Secretary Gavin Williamson cut the first turf on a £132m facility for the new fleet. The new facility will be completed in 2020, to coincide with initial operating capability of the Poseidon aircraft being available in the UK.

At the peak of construction, the project will support 200 local jobs. When the fleet is fully operational, some 470 additional service personnel will be based at RAF Lossiemouth, taking the total number of people employed there to 2,200. Further roles are also expected when the training and support services are established at the new facility.

And the Norwegian Ministry of Defence posted this news release on May 4, 2018 about the visit:

“In times like these, when the security landscape is complex and uncertain, we need close allies. I am especially pleased with the strong UK-Norwegian relations, says State Secretary Tone Skogen.

Earlier this week Minister for Defence Procurement Guto Bebb hosted Skogen on her visit aboard a US Navy P-8A Poseidon aircraft – equipment which both the UK and Norway will soon own themselves.

State Secretary Tone Skogen visited London and Royal Air Force Lossiemouth, the military airfield in north-east Scotland which will be the future home of the UK’s fleet of MPA’s (Maritime Patrol Aircrafts). The Poseidons deploy sonobuoys to help them detect and hunt submarines. The UK is buying nine of the Boeing-built aircraft, whilst Norway is buying five.

“These sub-hunters will take to the skies from RAF Lossiemouth and help us combat a range of intensifying threats, not least increasing submarine activity in the North Atlantic. We’re investing £3bn in our own capability, but working alongside Norway takes this to a higher level.

“Not only could we cut costs by sharing training, spares and repair facilities, but we can patrol the seas together, meaning we’ve got more eyes and ears on any potential aggressors, says Guto Bebb, Minister for Defence Procurement in the UK.

“In my discussions with Guto Bebb, I find a like-minded ally with unwavering determination to strengthen NATO and our bilateral defence cooperation. This relates to high-end capabilities such as the F-35 fighter and the P-8 maritime patrol aircraft, training and exercises in the North Atlantic and the Northern region, as well as operationalisation of the Joint Expeditionary Force.

I am delighted that the United Kingdom and Norway significantly enhance our cooperation on these and other important issues”, State Secretary Tone Skogen says.

Surveillance of the North Atlantic is important for both UK and Norwegian security. Norway and the UK will intensify cooperation in this important endeavour, also in a trilateral context with the US.

As the F-35 is coming into operation in our countries, Norway welcome increased operational cooperation also in this domain – as well as the P-8’s. Norway also highly value Royal Marines’ training and exercising in Norway, and welcome the deepening relationship between the Marines and the Norwegian Armed Forces.

Norway also highly appreciate the UK initiatives and European leadership in forums such as the Northern Group and the UK-led Joint Expeditionary Force (JEF).

“Norway and the UK have special responsibility both to ourselves and to the Alliance to ensure stability in the High North”, concludes Tone Skogen.

Featured photo is from the 2016 Farnbourgh Air Show.

United Kingdom Prime Minister David Cameron and Defence Secretary Michael Fallon stand with Royal Air Force crew members in front of a U.S. Navy P-8A Poseidon at the Farnborough International Air Show, July 11, 2016. During the first day of the air show, the Ministry of Defence confirmed a deal to purchase nine P-8A Poseidon Maritime Patrol Aircraft for the RAF. The new aircraft, which will be based at RAF Lossiemouth in Scotland, will play a vital role in protecting the UK’s nuclear deterrent and the UK’s two new aircraft carriers, according to an MoD press release. They will also be able to locate and track hostile submarines, and will enhance the UK’s maritime search and rescue capability. (U.S. Air Force photo by Master Sgt. Eric Burks/Released)