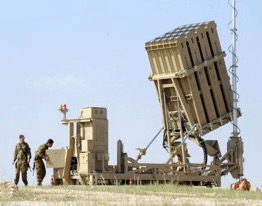 As Herman Kahn once noted: “Anything that reduces war-related destruction should not be considered altogether immoral.”

There is now the demonstrated promise of advanced weapons systems integrated together in an offensive and defensive enterprise to actually save the lives on innocents on both sides of combat action.

The Israeli Defense Force is pioneering such lifesaving con-ops of reducing the term “collateral damage.”

Collateral damage is a euphuism that can capture two parts of the loss of life.

Often in so called “friendly fire” incidents, which is actually not “friendly,” one’s own forces come under attack by their own forces.

The second, and most widely used expression for collateral damage, is hitting non-combatants with munitions.

Tragically in global war, at times, “collateral damage” really isn’t a mistake in ordinance delivery but rather a deliberate direct targeting of a  civilian population to achieve a strategic outcome.

The Cold war debates about how to fight and win a nuclear war had two building blocks of strategic thinking that defined a generation of intellectual turmoil and weapons development.

The two words on how to target ones opponent was “counter-force” (CF) and “counter-value. (CV).

At times many vicious debates were engaged in by very smart people on the issue of CF or CV targeting and Herman Kahn tried to always bring enlightened thinking  to that intellectual debate.

Fortunately those very public strategic debates had a desired effect of actually freezing the use of nuclear weapons by the USA and of our nuclear armed allies against the USSR and to a lesser extent the PRC.

Inside that construct President Reagan and his defense and foreign policy team prevailed and the Wall came down.

Sadly the proliferation of  nuclear weapons to places like North Korea and Pakistan, and the growth of PLA arsenal now complicates deterrence thinking and in not a good way.

The rumored removal of devices from South Africa, the actual removal from Ukraine and the IDF’s strategic ambiguity is often seen as positive steps but in different ways.

Hopefully the process of dealing with North Korea will led to de-nuclearization, and  Iran can be dealt with effectively to abort completely its quest for a workable weapon system a warhead married to a delivery vehicle, aircraft or missile.

Inside the issue of debating nuclear deterrence, since 1945, conventional wars and flash point combat engagements have clearly continued.

Tactical wars with strategic implications flourished from the dawn of the nuclear age to this day.

Combat engagements, including terrorism in the name of religious ideology sadly have followed the lyrics of a song  “and the beat goes on,” from the 20thCentury into this one.

But unlike the counter-force and counter-vale debates at a strategic nuclear level there has been so far an unspoken, for the most part, merging of 21st Century offensive and defensive conventional tactical weapon systems that have allowed for reduced collateral damage with the context of defending key interests against adversaries.

And this approach saves lives.

Conceptually, this can be understand in terms of changing how to execute the payload-utility function of warfare. A distributed  kill web can deliver a combat effect with reduced collateral damage and has the  tremendous promise in saving the lives of innocents in a limited conflict.

Employing OODA loop thinking can capture the two elements of fleet wide payload utility (Pu)and it is very simple to explain and difficult to execute:

Thus there is a very simple formula, better and better TA and TE =more effective employment of all payloads available to the battle commander.

The Israeli Defense Forces are on the cutting edge of understanding, developing and employing advanced payload utility kill web capabilities.

The new capabilities begin with their Iron Dome.

The Iron Dome missile defense system, designed and developed by Israel and jointly funded through the United States, is a response to the threats Israel faces from short and medium-range rockets and mortar shells fired by Palestinian terrorists in Gaza.

The system has the capability to identify and destroy such projectiles before they land in Israeli territory and is considered one of the most effective anti-missile systems in the world.

(1) the design and tracking radar, built by the Elta defense company;

(2) the battle management and weapon control system, designed by the mPrest Systems software company; and,

One of the most advanced features of Iron Dome is its capability to determine where an incoming rocket will land and to only intercept such projectiles that pose meaningful threats to populated civilian areas.

Note the emphasis on directly focusing on threat to populated civilian areas.

A few years ago I was given the opportunity to be part of a press call by a senior supporter of the IDF/Iron Dome and he made a brilliant point. Because their Iron Dome resulted in fewer deaths of innocent Israel citizens, included targeted schools, the IAF could more accurately target their counter strikes to the identified point of origin.

The counter force strike had the potential for collateral damage because their very nasty opponents often launched from high value civilian areas where it was almost guaranteed innocents would die.

But with the introduction of the most accurate bombing aircraft to ever fly, the F-35, a new chapter in fighting in civilian –military conventional hybrid-wars is opening.

The Iron Dome not only saved Israeli lives but gave the IDF much more accuirate aim points in their appropriate retaliation.

Israel has struck targets in the Middle East with the F-35 Adir jet twice, making the Jewish state the first country to use the stealth fighter in a combat role in the region, Israel Air Force Commander Maj.-Gen. Amikam Norkin announced on Tuesday.

“We are flying the F-35 all over the Middle East. It has become part of our operational capabilities.

“We are the first to attack using the F-35 in the Middle East and have already attacked twice on different fronts,” he said during the IAF Senior Air Force Conference in Herzliya.

For the first time in history, individual IAF F-35 pilots will have the best database of real time knowledge in the history of combat aviation.

And all of this is internal to their cockpit and enabled by advances in computer processing and sensor information fusing.

Each F-35 pilot combined with human sensing (seeing visual cues outside the cockpit) will be enabled by machine driven sensor fusion to allow combat “situational awareness” (SA) better than any other opponent.

Concurrent with their ability to look-see, which is limited by physical realities, the F-35 pilot will be able to “see” using cockpit electronic displays and signals to their helmet allowing them not to just fight with their individual aircraft but be able to network and direct engagements at significant range in 360 Degrees of 3 dimensional space out to all connected platforms.

A fleet of F-35s has the inherent capability to share their fused information displayed at the speed of light to other aircraft and other platforms, such as ships, subs, satellites, and land based forces, including UAVs and eventually robots.

Marrying the Adir with Iron Dome is the dawn of this next chapter of 21stCentury Kill Web integrated war fighting that will actually save lives on innocents on both sides.

Today over the skies of the Middle East a “tactical” aircraft is evolving into a key technology for strategic operations and impacts.

Payload utility as practiced by IDF/IAF can be a driver for understanding the future development of combat systems.

It is the process of understanding the huge complexities in such a simple Payload/Utility formula that is the challenge.

Understanding the technology and human dynamic through an analytic filter of a Payload Utility function consisting of weapons (kinetic and TRON) and the dual components of Target Acquisition (TA) and Target Effectiveness (TE) effectiveness in a fighting fleet engaged in high or low intensity combat in the unforgiving cauldron of battle and mitigation of unfortunate collateral damage maybe a war winner.

Either in one platform, or melded into a unified fighting force to bring all different types of appropriate “weapons on” for the kill shot is a powerful concept.

America must always appreciate that no platform should fight alone if the Wynne Doctrine, named for 21st Century Secretary of Air Force, is employed: “If it is a fair fight someone failed in planning.”

A very simple filter to look at platform and weapons development within the integration of current weapon systems and platforms is asking the largest questions possible and pursuing force design and operational answers to these questions:

What does weapon or system add to fleet Payload/Utility?

How does this system help in TA?

How does this system help in TE?

What is the best weapon for the highest Pk against the target?

Is the TA, TE and Weapons (kinetic and Tron) carried together F-35 or separate?

So far every nation flying in the F-35 global enterprise can learn from the IDF combat leaders merging the Iron Dome and F-35 into a demonstrated and formidable building block in Kill Web con-ops, while saving lives or otherwise known by the military acronym, “collateral damage.”